Photographer Mary Ellen Mark was besotted when she first witnessed an Indian circus in 1969. A waddling hippo sporting a pink tutu was being coached to circle the ring, before devouring a gigantic cotton candy cone. The hippos—following their millennia-long extinction in India—had reappeared on these shores a century prior, courtesy of peripatetic Italian circus director Giuseppe Chiarini, who had audaciously challenged the Indians to replicate his troupe’s stunts. They did just that, pitching up their very own circus tent in 1880 to cheering crowds. The Indians made it their own; one where vendors dispensed not candy apples but chapatis.

Twenty years later, Mark returned to India, and over six months followed 18 big tops by train, plane and rickshaw as they crisscrossed the subcontinent. The resulting 1993 photobook, Indian Circus, was far from the foggy, fevered world of Diane Arbus’s circus, but instead one teeming with human (and indeed bestial) zeal. What engrossed Mark was the everyday life beyond the ring in the dust-strewn alleys: a life of rehearsing, resting, and more rehearsing.

Performers are depicted perfecting tricks alongside their furry counterparts; a dwarf in a gorilla suit cradles a napping puppy, whilst elsewhere a chimpanzee diligently pushes along a buggy with a human baby inside. By framing these muddles of the “natural order”, Mark sought to highlight the anthropomorphic tendencies of animals—and in turn the oft-animalistic traits of humans. It is an interchangeability that transcends the costumes and enters the spiritual realm, reflecting the Hindu faith which maintains an egalitarian attitude towards animals; humans can be reincarnated as animals, and vice versa.

In one photograph, we find chimpanzee trainer, Arjun, sat on the sand beside his favourite pupil, Mira. Uncannily mirroring her sidekick, with love she lugs her lengthy limb over his shoulders to form their embrace. “She doesn’t like it when her sari falls and uncovers her breast. She fixes it immediately,” Arjun explained. “Same when her frock rises up to show her blue shorts. She understands everything.” At other times, the civility of the circus animals was slightly more dubious. “He doesn’t bite,” reassured a Calcuttan hippo keeper. “He just damages property.”

And then there was Shyama, the beloved elephant of the Great Golden Circus’ ringmaster, Ram Prakash Singh. Mark had approached the duo for a photoshoot, an offer Mr Singh snapped up—the performer, after all, is rarely one to duck the spotlight. “He actually thought the picture was all about him,” Mark said, noting his especially “big ego”. Turning up shirt-tucked, hair-gelled and moustache-preened, he had Shyama execute a trick in which he wrapped his meaty trunk around his owner’s neck. It was the kind of performance of prowess for the lens that wasn’t lost on Mark.

After holding his position for several shots, Shyama became quietly fed up. This fatigue can be detected in his sly and cynical roll of the eye, as if to ask: “Ugh… Are we done yet?” Shyama’s apathy was unbeknownst to Mr Singh, who stood proud, evidently taking the photoshoot far more seriously. Yet it is hard to dispute his rapport with these gentle giants; he spoke the language of both elephant and human. “When an elephant gets angry, two lobes form on the side of his head and a liquid flows out,” he clarified. “If the liquid reaches his mouth, he will kill. We put mustard oil on their heads so their brains don’t dry.”

Throughout the course of her prolific career, Mark displayed an affinity for lives lived in society’s fringes; from the women of a psychiatric hospital in Oregon to Seattle’s runaway street kids. The latter, a 1983 LIFE magazine assignment, sparked a friendship with one its subjects, Tiny, which lasted until Mark’s death in 2015. With the Indian circuses, it should not be overlooked that their entanglement in grit, grace and poverty undoubtedly made for exotic content for a western audience. But what ultimately shines through is not only Mark’s documentary imperative to “give [the circus] the credit as an art form that it deserves,” but her personal attachment, too. “I feel very at home there,” she once reflected. “In a strange way, it’s where I belong.”

“It is hard to dispute his rapport with these gentle giants; he spoke the language of both elephant and human”

Even then, there were murmurings that the circus might not survive the generation. Their archnemesis was the television set; Indian allegiances had shifted from the big tops to the small screens, with almost every village tuning in for televised tricks. The next blow to business came in 2013 when their use of wild animals was banned, driving many companies into bankruptcy. However, even the most religious circus nostalgist would have a difficult time denying that this was a victory for the animals. The industry was forced to bite the bullet; in the form it existed, the circus was outmoded and incompatible with a progressively modernising India.

This year, a new threat has emerged on the horizon: coronavirus. Demand has dried up, and livelihoods have been lost. In the 90s, there were over 300 registered circuses across India. Now there are around thirty. Mark’s documentation of the circus looks increasingly like a record of an art form that is ever-edging towards its final disappearing act. Although those still standing may indeed be living on borrowed time, the circus is, after all, a tradition that has continually risked life and limb to deliver daredevilry at new and unimaginable heights—and always in the face of near-on impossible odds.

Mary Ellen Mark: The Book of Everything 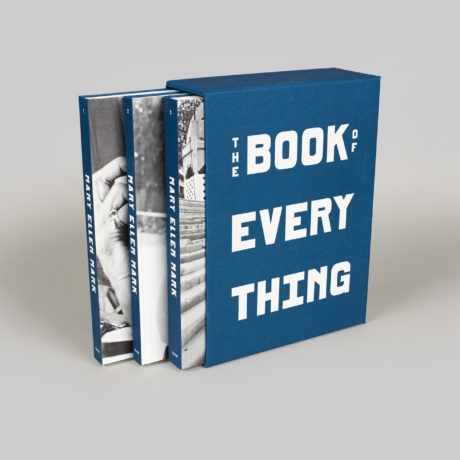