The expression “Going to see the elephant” would have been heard widely across the North American frontier as it became associated with the Californian Gold Rush. It has a few different interpretations, but most commonly appears to mean heading out to seek your fortune or embarking on an adventure. American Pioneers would often refer to the trials and tribulations of their journey out west as “seeing the elephant”, and the phrase later referred to the experience of soldiers in the American Civil War.

The origins of the saying are a little unclear; one account is given of a pageant in Philadelphia in which an elephant was required to be on stage for several hours. In lieu of a real elephant, the pageant organizers provided an elephant costume for two men to stand inside. The men whiled away their time by drinking heavily, so that when they came to perform their part they instead stumbled drunkenly into the orchestra pit. Audience members were overheard as they left the theatre saying to each other, “Have you seen the elephant?” Another story goes that a New England farmer in the 1820s (the early days of travelling circuses), with a strong desire to see an elephant, heard of a nearby travelling circus and set off to see it. On the way, his horse and cart collided spectacularly with the oncoming circus train, led by the elephant, killing the horse and knocking the farmer unconscious. Upon waking, the farmer surveyed the catastrophic scene and proclaimed, “Well, at least I have seen the elephant.” There is also a theory that elephants became synonymous with journeys and experiences in strange and far-off places as far back as the third century BC, in reference to Alexander the Great’s defeat of King Porus of the Indus Valley and his elephant-mounted army.

Whatever the origin, we like the fact that elephants have been associated with the spirit of human adventure and bravery, and to celebrate this we are starting a series of talks at our pioneering new art space that celebrates courageous and interesting humans. We start this Sunday with Kiko Matthews, who in March this year broke the world record for the fastest female to cross the Atlantic, solo and unsupported, in a rowing boat. Alongside this incredible feat, she has also survived Cushing’s Disease and the removal of not one, but two brain tumours. She is now on to her next challenge, Kik Plastic, which involves her cycling around the coast of the UK undertaking beach cleanups with local communities and environmental organisations throughout 2019. If you are in West London on Sunday, come by, grab a coffee or a glass of wine and listen to Kiko speak about her experiences and living a life with purpose. The elephant is waiting to welcome you. 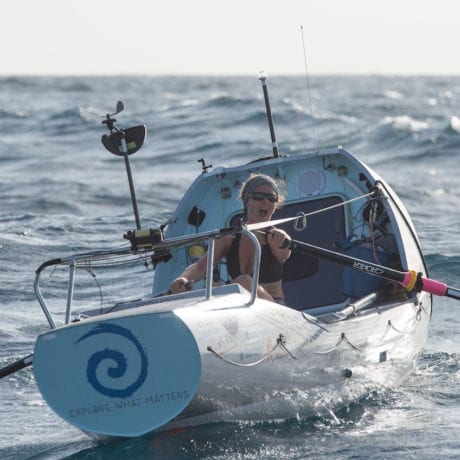