Once upon a time in a tiny corner of Argentina’s sprawling plains, there lived a pair of cousins named Guillermina and Belinda. When they crossed paths with photographer Alessandra Sanguinetti on their grandmother’s farm, two became three. Beneath the setting summer sun, they spent countless evenings larking around and playing “make-believe”; Sanguinetti behind the lens, the girls before it, utilising costumes and props to re-enact the affairs of an eclectic range of mythical figures—from the Virgin Mary to the legendary moustache-rocking cowboy, Gauchito Gil.

Embodying her characteristic magical realist charm, Sanguinetti’s 2010 book, The Adventures of Guille and Belinda and the Enigmatic Meaning of Their Dreams, offered a glimpse into these playmates’ fantastical worlds, imbued with daring imaginations and ceaseless wonderment. On one hand, Sanguinetti’s early photographs are an ode to the blissful ignorance of children still to encounter life’s extremities, and, on the other, serve as vanitas conveying a time that is behind them and to which they will never return. The book’s concluding photograph depicts the cousins consoling one another; two inseparable figures, engulfed in a gloomy night sky that closes in on them, as if foreboding an inevitable yet not altogether knowable future.

“Playtime is over; golden wigs and fake nails aside, the cousins now face the tricky territory of teenagehood”

Sanguinetti’s newly-published sequel, The Illusion of an Everlasting Summer, charts the life that followed—a simultaneous continuation of their story, yet a distinctive chapter of its own. Playtime is over; golden wigs and fake nails aside, the cousins now face the tricky territory of teenagehood—threatening and tantalizing in equal measure. The tone here is more sober, subdued and sometimes sombre; all of a sudden, the world seems a far more real place.

The inner lives of girls, caught between childhood and budding adulthood, has long been a subject of intrigue for photographers; think Julia Margaret Cameron’s mystical maidservants, Sally Mann’s posturing twelve-year-olds, Justine Kurland’s fearless runaways or Lauren Greenfield’s Venice Beach brats. What makes Sanguinetti’s documentation a rarer form of photographic practice is the longevity of her camera’s focus in which she coaxes out the subtle emotional shifts from day-to-day, year-by-year.

The cousins were always unmistakable for their mismatching physiques—Belinda slender, while Guillermina plump—a fusion that was offset by the equality of their sisterly adoration. As they awkwardly progress through puberty, not only do the signs of their morphing shapes become starker, but they become increasingly conscious of it too. More considered—and occasionally suggestive—their poses hint towards heightened self-awareness and burgeoning sexualities.

New figures enter the frame. We come across Belinda, newly-married at sixteen, with her husband, Pablo. They stand barefooted beside an animal pen; she stares neutrally into the lens whilst he, somewhat slackly, turns his face. Their left hands interlock, yet there is something off-kilter about this affectionless embrace.

As the photographs accumulate, Sanguinetti’s progressively back-seated position becomes apparent. The raw, revelatory results from the cousins’ younger days—where grins and scowls ooze abundantly—have given way to more opaque ones. Here, we encounter an armoured, vulnerable youth, as though the girls are keepers of some obscure and vaguely troublesome secret.

Even from a young age, the pair paraded their acute grasp of traditional gender dynamics. In the preceding book, we see them playing “house”, seamlessly alternating between male and female stereotypes through cross-dress. More frequently, however, they step into the matriarchal shoes; in one photograph, they nurse three baby dolls snuggly wrapped-up in blankets, whilst in another Belinda stuffs a balloon beneath her dress as if expecting. “She always knew she wanted a family… that’s all,” said Sanguinetti. Now, we find her eight years later breast-feeding her new-born on her “wedding bed”, gazing wistfully through the window. Is motherhood how she dreamt it? Guillermina glances in the other direction, her expression perturbed.

It is in these moments that the book begins to unveil the fractures in their transitioning friendship—and ultimately the divergences in their ever-materialising paths. Belinda was the more pragmatic one, emotionally-restrained and forward-looking. Guillermina, contrarily, was the “hopeless romantic”, adamant Prince Charming would one day appear at her doorstep. Yet, her biggest fear was having a boyfriend. “He might abandon me,” she once bewailed. “I’ve seen that’s what people do. Leave each other.”

“Are their paths scripted from birth, or are they self-determined?”

Following Belinda’s birth and newfound family, Guillermina became lonely. We feel her estrangement pervading the photographs, gradually casting her peripheral presence. At other times, she adopts a maternal—and often protective—role, tending to Belinda’s plaster or swollen belly. They are gestures that indicate her instinctive love for her best friend, as well as her trepidations over letting go.

Afraid of the prospect of spinsterhood, Guillermina followed suit and got pregnant, subsequently becoming a single mother. Both girls’ stumblings into motherhood puts a spotlight on the tug of war—between destiny and agency—that they tussle with, all the while trammelled by a conservative countryside where social expectations loom large. In one of the book’s scarcer light-hearted moments, we find the girls (bar their peeking faces) buried in the dirt, evoking their symbolic passage out from the earth in which they were borne, and into a world they may not be ready for but awaits them nonetheless.

Are their paths scripted from birth, or are they self-determined? Or maybe, through the twists and turns of their respective journeys, it is never so clear-cut. What is indisputable, however, is the burdensome weight of each of these corners taken. From here, there is no turning back—no stripping off the fancy-dress. By her sensitive chronological sequencing, Sanguinetti conjures the fleeting presence of adolescence—each alternating blank page signalling a time-lapse, whether infinitesimal or huge, it is sometimes not so obvious.

The book leaves us with the pair in their mid-twenties. They have grown up and grown apart, but we know full well that their stories do not end here. Sanguinetti has continued to track the adventures of Guillermina and Belinda and more chapters will come. Yet, we get the sense that this particular leap might be their most consequential of all, as they transition from stars in Sanguinetti’s story to writers of their own tales.

Alessandra Sanguinetti, The Adventures of Guille and Belinda and The Illusion of an Everlasting Summer

Published by MACK, out September 2020 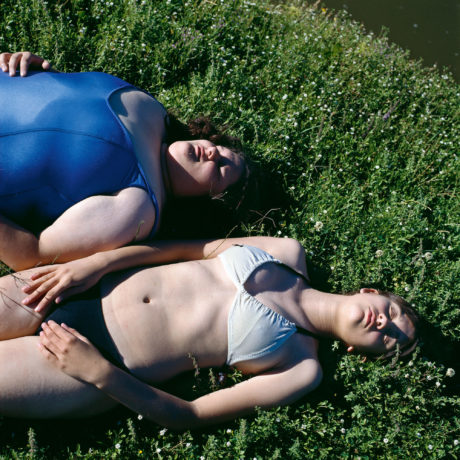