“Our wedding photograph,” writes Rao Pingru, “has not survived the upheavals of the intervening sixty years, but I can still remember it being taken, and the light falling on the eaves and the pillars, as vividly as if it were yesterday.” In 2008, when Pingru (then eighty-seven years old) lost Meitang, his wife of sixty years, he decided to memorialize their life together in a book illustrated with vivid little watercolours, recording the small details that become treasured memories and make up the sum of a life. The result is an intensely personal folk-art memoir of the minutiae of family life which also provides a fascinating glimpse into the violent political and cultural convulsions of twentieth-century China.

Pingru was born in Nancheng county in 1922, where little had changed since the days of the Song dynasty, and enjoyed a happy childhood informed with ancestral traditions. Some of the book’s first pictures show the ceremony that marked Pingru’s first calligraphy lesson, the making of a lion lantern with his mother and siblings, a diagram showing the correct way he was taught to wring out a washcloth. Woven into this are his wife’s own childhood memories: one picture shows a small Meitang getting emergency treatment after an overdose of deer antler. Pingru records the first time he saw his intended bride through a window, as she stood applying a dab of red lipstick; later he draws, just as lovingly, the home-made dialysis equipment he devised in order to care for her kidney affliction in old age.

Pingru joined the Imperial Army in 1941 to fight the Japanese, and records the sight of human corpses and animal carcasses amid jade-green mountains. His pictures tell expressively of his talent for observation but also of his capacity for happiness, allied with a remarkable stoicism. He only mentions in passing the consequence of being perceived as a class enemy of Mao’s new regime—being sent to a Re-education Through Labour camp in 1958—and it takes some piecing together to realize quite how many years he spent in this predicament, reduced to “unskilled and primitive labour” and only visiting his wife and children once a year for Chinese New Year.

Our Story. A Memoir of Love & Life in China by Rao Pingru

Out now with Square Peg 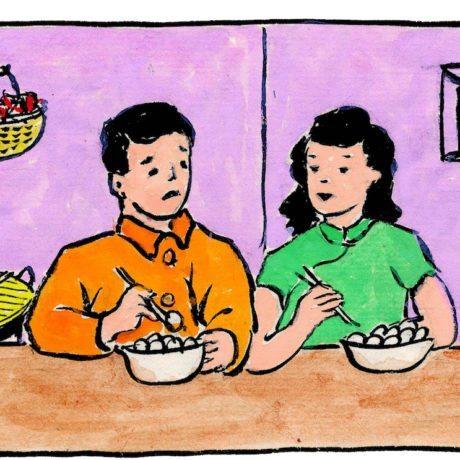