Stuart Semple is no stranger to the joys of music—as he recently testified in the Studio Soundtrack he created for us. “Music can really influence the way I make gestures,” he told me at the time. “It sounds weird, but there’s a way that the emotion of a song can come through into a painting.” He’s also no stranger to colour. In recent years, the artist has become renowned for his “spat” with Anish Kapoor, a response to Kapoor’s purchase of exclusive artistic rights to Vantablack, the “world’s blackest material” in 2016. Semple’s response was to release a series of paint colours including “the world’s pinkest pink”, available for everyone to buy, except Kapoor.

Now, his love of colour, music and a third strand that underpins his work—campaigning around and discussing mental health and happiness—have united in his design and painting of a piano for our Elephant West space, titled Express Yourself. The piece aligns with much of his socially engaged work—Semple is an ambassador for mental health charity Mind, and previous projects have included Happy City, which comprises an app and a series of public art interventions and interactive projects that aim to “connect strangers and swap fear for connection in public space” (as documented in a short film). These include smiley artificial clouds launched into the sky from museums, interactive painting walls at community centres and an Emotional Baggage Drop at Union Station in Denver, which invited visitors to leave behind an emotional burden and was “designed to blend seamlessly into the interior architecture of the space, suggesting that sharing emotions with each other should be as normal as checking a suitcase”, as Semple puts it.

It’s fitting, then, that Express Yourself is part of Elephant West’s partnership with Sing for Hope, a US-based music not-for-profit that supports at-risk and fledgling music programmes internationally; partly by providing beautifully painted, high-quality pre-owned pianos to schools and community centres around the world. The Semple-painted piano—Sing for Hope’s London edition—will remain at Elephant West for all to play and enjoy through December before being donated to arts mental health not-for-profit Hospital Rooms for use at the Bluebird House Ward Southern Health NHS Foundation Trust.

The piano project follows an exhibition at Elephant West created in collaboration with Hospital Rooms: a charity which collaborates with high profile artists such as Sonia Boyce, Julian Opie, Gavin Turk and Tschabalala Self to produce artworks for NHS mental health inpatient units across the UK. The show featured images from Hospital Rooms’ latest commission with the Hellingley Centre in Sussex, with works by artists such as Richard Wentworth, Lothar Götz, Hannah Brown and Tim Shaw, who co-founded Hospital Rooms with curator Niamh White.

Semple tells us he’s long wanted to work with Hospital Rooms, and that being asked to work on a piano which was to be donated to a mental health ward it “ticked every box”. Naturally, it’s very colourful: “Cyndi Lauper says that on the dullest days, she wears her brightest colours. Mental health wards are often so monochrome and depressive—its horrible—so I wanted to put something vibrant in there.”

“It’s a collaboration: it’s not about me, it’s about the patients”

The piano was painted on the front and back using colours that appear to be dripping; something of a departure from the artist’s usual more figurative work, which also incorporates text, to avoid making marks on the piano that might be too triggering to vulnerable patients on the ward, “so it had to be about colour”, says Semple. “I came up with a few different iterations, but then I had the idea of a rainbow, but to make it dripping, so it’s a bit like photorealism in a way. It was harder than I thought!” The sides are left blank, meaning that patients can paint them, making the piece a collaboration: “It’s not about me, it’s about them,” says Semple. “I’m excited to see what they do.”

But painting a piano, with its intricate elements and unusual arrangement of parts, was a challenge itself—resulting in some interesting moves in order to paint the instrument’s harder-to-reach spaces. “You have to do some mad yoga!” says Semple. “It’s very physical: there was a lot of squatting down and bending over, and it was all in one day; so seven hours of intense painting.” The dripping idea was to create a look that was more art, “not just design”, says Semple.

Having spoken to me before about the importance of music while he works, I had to ask what he listened to while painting the piano. Turns out he was in luck. “You wouldn’t believe it—whoever works in the cafe [at Elephant West] has the same music taste as me it was song after song after song that I love, even the weird stuff; things like Talking Heads, Bob Dylan, The Cure, but the rare ones that I love. It was like that all day; I was wondering if they’d cheated and gone through my work, if it was all a setup!”

To celebrate the launch of the project, we’re holding a party for Sing for Hope Pianos London Edition this evening at Elephant West, which is located next to London’s White City tube. Along with drinks and canapés, the evening will include a live performance at the piano by performing artist Joe Webb, plus a special guest appearance by the Staff Band of Bluebird House.

Sing for Hope London Event, showing the Express Yourself piano by Stuart Semple

Launch party 13 November from 6.30 to 9.30pm. The piano will be on show through November and December at Elephant West, London 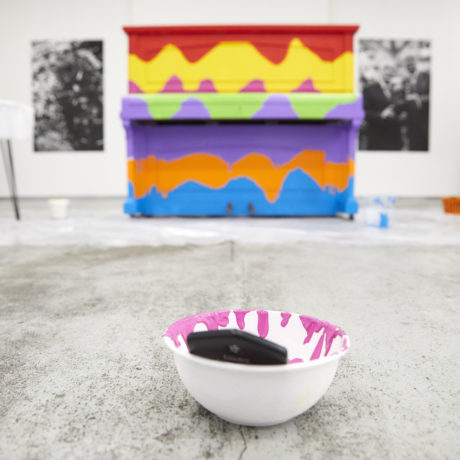