How did the exhibition Magic & Method come about? Did you produce new work for it?

Matt Incledon of Frestonian Gallery reached out to me proposing the pairing with Eduardo Paolozzi and Douglas White’s work. I’d not imagined this combination and I was really interested when I heard his curatorial idea. Douglas and I have been friends for a few years and I’m a great fan. We met installing works for David Roberts back in 2010. My sculpture was a luscious pink 22ft copy of the Disney Castle, and Douglas’s was an incredibly powerful dark black palm tree made from shredded burnt-out tires. Visually very different—but perhaps sharing an interest in ideas around nature and culture.

That theme seems to appear in this show: Paolozzi’s robot-like figures have an echo in my cubist-like busts, a seeming crescent shape cut into my larger piece segues into one of Douglas’s moon works, and a portrait of Faraday by Paolozzi sits opposite a piece by Douglas created by passing an electrical current across its surface. The main space is monochrome—a really elegant hang.

In the gallery’s second room colour is introduced—and included is one of my new works, a colourfully patterned bust, the first in a body of work I’m producing this year.

A series of cultural icons are referenced in the works’ titles: Jane Austen, Coco Chanel, Henri Matisse. How do they relate to one another—and to your practice?

I chose the Coco Chanel quote “I never wanted to lean more heavily on a man than on a bird” because the sculpture referenced both Brancusi’s Bird In Space and Rodin’s Walking Man. Chanel seemed to encapsulate both works and add a third “new” meaning. Very loosely, I’m interested in Hegel’s idea of the dialectic, where, as I understand it, the solution to a problem comes not from a compromise in the middle but from a wholly new third thing: the “synthetic”. When it comes to art creation, the lines between citation and “creating new” can be complex. The sculptures in which I feel I have created these new “synthetics” I call “intersections”.

“There are short-term and long-term traditions. For example, there is already a post-internet sensibility and artists fit within that tradition”

Your works look anything but traditional. Can you explain something about your production methods and attitude to digital technology?

I’m not a digital native—I started my undergraduate at the exact point that analogue was transitioning to digital. In my first year at the Slade we used analogue Hi8 videotape, in my second year Apple introduced FireWire and made MiniDV and digital non-linear editing became immediately accessible. Whilst studying at the School of the Art Institute of Chicago, I was part of a group called Radical Software Critical Artware set up by Jon Cates. We debated medium specificity in relation to video and “net art”. It was a very intense chapter. The physical traits of 35mm and 0s and 1s. In my practice I am conscious of what could be termed digital and analogue processes… and I’m interested in the associations we have attached to each in relation to objectivity and truth.

To answer your question another way: sometimes I might go to a museum and draw the outline of a figure, other times I might appropriate an image and use software to automatically convert a jpeg into a line. At each step of my process I can choose to use a “hands-on” method or a software/machine/digital treatment. For example, I can 3D-print a design and then hand cast it using clay and plaster, or I can handmake a work and then digitally scan and reproduce it. For me, the bottom line is the meaning of each gesture—choosing at which point to be subjective and which objective, and what that might mean. For my “intersection” sculptures I like the works to be produced as objectively as possible.

What does “tradition” mean to a twenty-first-century sculptor?

It depends on the context. There are short-term and long-term traditions. For example, there is already a post-internet sensibility and artists fit within that tradition. I guess I use the term only to represent a direction, a vector­—namely, stationary or backwards—that can sit anywhere along the historical timeline. If one’s reading of the world is contingent on one’s position, then orientation is key. Everything is a bit slippery. My vantage point is that of a thirty-seven-year-old gay white male Londoner. I have traditions. I have baggage. In order to move in a direction you have to have some fixed points and a “compass”. I use a few points: 1504 (Michelangelo’s David), 1851 (The Great Exhibition), 1877 (Rodin’s Walking Man). These are things which have some collective meaning. I’m not unaware of their subjectivity—namely, their eurocentrism. I’m always in the process of trying to understand what territory I can identify with and comment on.

In Magic & Method your work is being shown alongside that of Eduardo Paolozzi. Would you describe Paolozzi as an influence?

No, he’s not been an influence yet. He’s a bit too close to home… a bit too modern. I tend to look further back in time. In fact, I find his work incredibly “contemporary” in its sensibility—for example the Tottenham Court Road Tube station mosaic could have been made yesterday, with its colourful nod to the digital pixel. For the future, though, yes: his fragments, his figure-cum-geometric assemblages—and colour.

Until 21 April at Frestonian Gallery, London 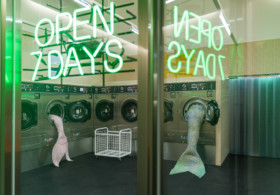