Zoobs Ansari’s work provocatively captures the anxieties and dynamics of our contemporary culture. His new show, Insanity Fair at Elephant West, not only infers references to iconic artists of the past but also to our current obsession with persona and the darker side of fame. Memories from his childhood, both in London and Pakistan, infiltrate his hybrid aesthetic, from the trauma of his father’s death when he was only eight years old to his childhood attraction to the glamour of American TV programmes such as Dallas and Dynasty and his move to Pakistan aged ten. The artist, known professionally simply as Zoobs, takes Andy Warhol’s famous line, “in the future everyone will be world famous for fifteen minutes”, and dramatically uses it as a visual metaphor.

Drawing provided an “escape into another world”, but it was his training at Kingston University in graphic design, and an opportunity presented after graduation to work for the makeup brand Shiseido in Paris, that led him eventually to his path as a fine artist and his particular vision. Zoobs’s distinctive bodies of work touch a nerve. When he felt that his portraits were becoming “too clean and crisp” he began to deconstruct them, creating collages (a medium he has utilized since childhood) then reconstructing them by overlaying with painting or lettering. In his work Ashes to Ashes (2013), part of his Word Search series, a bright hyperreal David Bowie is overlaid with individual letters, the fractured lyrics of his song a device to make us “focus more on the portrait subject”.

It seems as if the certainty of death is never far away in Zoobs’s art. In Lips (2014), from his Forever Young series, he combines skulls with some of his fashion beauty shots. Skin becomes transparent to reveal the hidden scaffolding of the self, half beautiful and half horrific. Zoobs suggests that “it’s a really interesting concept to combine death and the idea of longevity of life, youthfulness and beauty and staying fresh. We’re not perfect; as we get old, we get wrinkled. We get cuts and bruises and marks. Now we just fix everything but it’s not really perfect—it’s been made perfect.”

“We’re not perfect; as we get old, we get wrinkled. We get cuts and bruises and marks”

This body of work also resonates with his Social Anxiety series where, in both Social Anxiety No.12 and Social Anxiety No.16 (both from 2018), there is poignancy and paradox as he “haphazardly plasters together different images that are read as one—albeit distorted—face”. In No.16 the image is constructed from individual beauty shots that are “archetypally perfect” yet touch on our collective anxiety about how we look and perceive ourselves, reflecting a “terrible sense of insecurity or inferiority fuelled by social media and celebrity culture”. Zoobs wants us to feel uncomfortable viewing this work “because at the end of the day, perfection is a lie”. He wants to show the two sides of the story to make people feel wary of the beauty trap.

The idea of perfection is also inherent in his Hollywood Dreamscapes. When Zoobs moved from New York to LA to escape a relentless New York winter, the climatic contrast he keenly felt manifested itself in his work. In View From My Therapist’s Window (2016) we see an archetypal sunny LA landscape: the parking lot, the sandy beach with its traces of thousands of footprints, scattered people and palm trees. Zoobs explains that his move to California caused him to “fall in love with landscape photography all over again. Everywhere was so brightly lit by both day and night, it was so filmic and cinematic.” He felt compelled to make work in either hyperreal colour or black and white, both references to archetypal Hollywood films. In View From My Window (2016), taken at dusk, there is scaffolding, palm trees and neon, the artificial and natural coexisting.

Perhaps though it is Zoobs’s video portraits that most represent his enduring concerns. He started these works because he felt that “there was so much I was missing out on with my stills and I wanted to capture those in-between moments, because everybody can look very confident in that still, but what about those moments of unease?” His “emotional engagement” with his work and need to “record everything”, was a dynamic born out of his childhood feelings of abandonment and fear that “time was running out”. He also preferred to work as he has always done, one-to-one, without production teams, applying the makeup, designing the sets and the props in order to minimize distraction and create a relaxed trusting environment of just “you and them”.

In The Muse – Video portrait of Melanie Griffith, 2015, we get a transformative Warhol-esque screen test. Warhol’s own Screen Tests were silent, black and white portrait films produced between 1964 and 1966 and originally conforming to simple rules: the subjects were centrally placed, well-lit and attempting to hold a pose for three minutes in front of a static camera. Zoobs’s dynamic short videos are also black and white and lit in a similar manner. We see Melanie Griffith, part goth, part golden age of Hollywood star, as she mimes for the camera. Yet it is the sound that adds layers of intriguing narrative, as we hear snippets from an interview between the art historian Edward Lucie-Smith and Warhol, with the latter intoning “I paint anybody, anybody that asks me,” or “I try to make people look good … I try to do big simple designs.” The whirring of an old-fashioned film projector propels us back to the analogue age.

“I feel like everybody performs on a daily basis, even when they go to work, everyone puts away their vulnerabilities, and it’s a façade”

Zoobs feels an empathy with Warhol, commenting that “every answer that he replied [to Lucie-Smith], I feel like that’s what I would have said. I feel like maybe I channel him because I get him.” In I’m Too Sad to Tell You – Video portrait of Meitel Dohan (2015) there are multiple references. Firstly, the Warhol screen test of Ann Buchanan (1964) where she, as he related to the Herald Tribune in 1965, “…did something marvellous. She cried.” Dohan also cries as she listens to “Everybody Hurts” by REM. The evocative music, her commanding presence and Warhol’s voice all create an atmospheric and intimate portrait.

Ultimately in Zoobs’s collages, multi-media works, photography and videos, he peels back what might be behind the mask, revealing the tension and the turmoil, the dream and the reality. “I feel like everybody performs on a daily basis, even when they go to work, everyone puts away their vulnerabilities, and it’s a façade. It’s a mask, whether it’s the makeup that you are wearing or your outfit.

Until 9 April at Elephant West, London 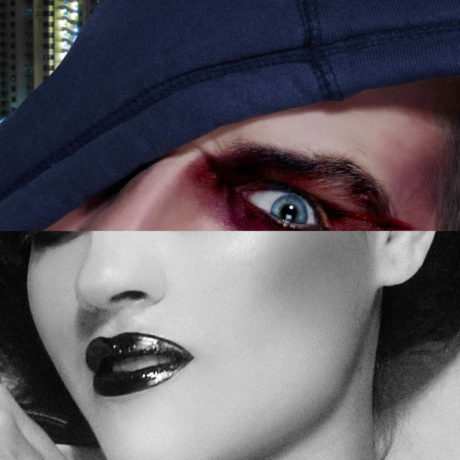