Cristina de Middel is giving a talk at the Dillon Gallery booth at Photo London.

“New Zealand is too beautiful for me,” she says, standing in front of some of her own images of that country’s bewitching mountain scenery. “There is something disturbing about landscape for me, especially in photography. Unlike with portraits or street photography, landscape photography reduces the real experience.” That sense of unease and dissatisfaction—both with the world and with the way photography typically renders it—made her want to do something different with the genre, she says.

In recent years, de Middel—a nervily exuberant and extremely likeable performer who concludes her brief talk at Photo London with a cheeky self-mocking bow-curtsey—has made a reputation for herself by repeatedly “doing something different” with conventional photographic subjects. De Middel’s experiment with the New Zealand landscape involved the use of a mirror. Another new project on show at Photo London, Jan Mayen, saw her travelling to the Isle of Skye, off the northwest coast of Scotland, to re-enact the activities of a group of wealthy amateur explorers who, in 1911, having failed to “discover” an island off the eastern coast of Greenland, went to nearby Iceland to stage a faked landing there instead.

The latter project was suggested to de Middel by Timothy Prus, the director of the Archive of Modern Conflict, who came to her bearing a box of materials documenting the 1911 expedition. “I’ve been collaborating with the archive for some years now and they have a very funny, relaxed approach, which goes very well with my understanding of photography and archive in general,” de Middel says. “They allow people in to give a second life to the images.” Jan Mayen is about failure, an abiding theme in her work. “I love people who try,” she says.

De Middel’s breakthrough work, The Afronauts (2012), was about another group of people who tried and failed: the members of the Zambia Space Mission, who aimed to put the first African on the Moon back in 1964. De Middel first learned of the project via “a list of the ten craziest experiments in history” which she initially assumed must be a spoof—it seemed so at odds with the idea of Africa usually carried in the media. But a little research confirmed the truth of the story. The space mission had not been documented visually, however, with the result that few people (not least, Zambians themselves) knew about it. To rectify the situation, de Middel decided to stage the visual “proof” herself.

The humorously celebratory project caused both excitement and unease. A few people, she says, “contacted me to share their impression that I was a racist, that I was making fun of Africans”. (Her intention was quite the opposite, of course, and de Middel says that in her experience most Africans view The Afronauts’ appropriation of NASA poses and paraphernalia in the way that Britons view James Bond movies and their humorous celebration of clichés about the spy world and national character.) Others worried about the project’s mixing of fact and fiction. All the same, today The Afronauts is credited with breathing new life into the photobook as a form and with opening up more imaginative approaches to traditional photojournalistic subject matter.

If The Afronauts made a few people think de Middel was a racist, it made a lot more people assume that she must be an expert on African affairs—despite the fact she had never set foot in the continent at the time. As a result, she has since found herself invited to participate in a variety of projects in Africa, including LagosPhoto, where she has served as a curator. These are duties she takes seriously. “We should focus on repairing what this monster, the media, has done to the image of Africa,” she says.

One of her recent projects grew out of a visit to Makoko, a floating Lagoan slum, “where most photojournalists go to feed the cliché of the beautiful but still poor Africa,” she says. De Middel was, as ever, determined to do something different with this most evocative of settings, deciding to restage a retelling of Amos Tutuola’s surreally magical novella My Life in the Bush of Ghosts there. “I thought the neighbourhood deserved a more comprehensive portrait,” she comments. It certainly gets that in the resulting photobook, This Is What Hatred Did.

She mentions an interview she gave around the time of LagosPhoto in which she was quoted as saying that documentary photography was no longer a good tool to describe Africa. “That was not my message: I didn’t say it wasn’t good—I said it wasn’t enough.”

Of course, de Middel spent many years working as a straight—and highly idealistic—photojournalist, employed by a local newspaper in Spain. “Magnum was like the Vatican to me,” she says. But it was only when she quit newspapers and straight reportage for the art world and a more fantastical approach to “fact” that she really discovered her voice. “I found it running away from where I thought it was,” she notes. Not that she thinks she has a particular aesthetic style (“I really adapt my language to what I need to say”), nor does she feel entirely at ease with her new artworld celebrity (“There’s something about just being present in the art world that I don’t really like… My ultimate goal is to go back to newspapers”).

At university she studied fine art and still loves to draw (“It calms me down”) but isn’t much interested in the debate about photography’s relation to Art with a capital A. “Art is always about communication for me,” she says. “So instead of trying to include photography in the art world, I would rather include all art in the communication world. With contemporary art, many artists forget about the audience and talk to themselves. When I make work, the first priority is to make myself understood.” So the big question for her remains: “What is the role of photography as an agent of change in the world?”

The Afronauts coincided with, and in some degree precipitated, a period of personal and professional crisis for de Middel. “I was turning the page on many things: I had no job, no gallery, nothing. So I ran away. I thought it was logical to go to China.”

As this apparently throwaway comment suggests, de Middel has a splendidly improvisational approach to travel and geographical mapping generally. One of her favourite ways of travelling around and documenting her home country of Spain consists of tracing out “semantic routes”. There is a Safari Semantic Route which is made up of a string of places bearing the names of animals and birds: León (Lion), La Paloma (Pigeon), etc. A big fan of movies as well as road trips, de Middel has also mapped a Horror Route: “Lots of places in Spain have names that remind you of horror movies.”

But back to China. “I had nothing to do, nobody understood me. My camera was my only companion.” She stayed for three months, roaming the streets taking pictures and “rediscovering the joy of photography”. The result was 1,500 images that she really liked but that lacked a narrative thread to pull them together—until de Middel came across a copy of the Little Red Book, that is. Opening a copy of the famous collection of bons mots by Chairman Mao published during the Cultural Revolution immediately “concentrated all my thoughts”, she says. The first page, beginning with the words “The Communist Party”, struck her as the basis for a good joke. “China now is the most liberal economy you can find,” she laughs.

Party (the reworked book’s title) is, de Middel says, her favourite among her projects. Inevitably it links to her favourite theme too. “The Little Red Book is about the failure of a utopia,” she says.

It’s hard to keep track of de Middel’s multifarious current and most recent projects—there’s one about nationalism in Spain, another wildly ambitious-sounding one about African religion, another about prostitutes’ clients in Brazil called Gentlemen’s Club, and yet another about—what else? Charlie Chaplin impersonators. Every year, to coincide with the birthday of the creator of the Tramp, hundreds of Chaplin lookalikes gather in a small town in India; a celebration de Middel has documented. “It’s a funny fact to catch people’s attention—a funny fact to talk about working conditions in India,” she explains. “The project is still a reaction to photojournalism. We’ve been told the same thing in the same way using the same words for too many years now, and we still don’t understand the world we live in.”

The opportunity created by the success of The Afronauts hasn’t been wasted on the indefatigable de Middel. “It came at a moment when I had nothing to lose, and that helps,” she says. “I have a feeling that I was really ready to go. I was waiting behind the curtains backstage, the microphone fell, I picked it up and…” Whereupon, quietly, with characteristic self-mocking boldness, she begins to sing. 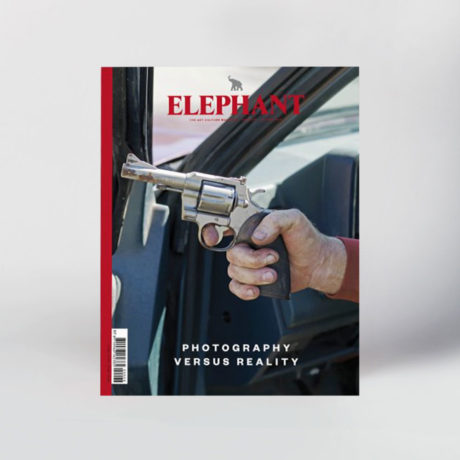