“We watched as the sparkling black river crossed the park, and then the highway, and then came silently up our street,” New York-based composer and multimedia artist Laurie Anderson intones dreamily in Landfall, her collaboration with San Francisco experimental string quartet Kronos. The thirty-track electro-acoustic piece is a response to Anderson’s personal experience of disaster: when Hurricane Sandy hit the New Jersey coast on 29 October 2012, a 32-foot wave rolled into New York Harbor and the artist’s Lower Manhattan home was flooded.

The track Everything Is Floating evokes the old keyboards and props she found drowned in her basement, the mementoes of a lifetime of performance turned to flotsam: “How magic. How catastrophic.” (The album is paired with the release of All the Things I Lost in the Flood, a retrospective book covering projects from throughout her career.) But in true Anderson style Landfall also reaches profoundly beyond the personal, at once inwards and outwards. Its string of post-apocalyptic “stories with tempos” (Anderson’s words), with titles like It Twisted the Street Signs and Riding Bicycles Through the Muddy Streets, show the artist as a masterly sound sculptor who, in the words of Kronos member David Harrington, operates in a place “where technology has personality”, a trait already evident in her surprise 1981 chart hit O Superman, with its mesmerizing use of the vocoder.

Much of the music in Landfall is generated by software designed for the solo viola and reinterpreted for the quartet, with added elements of the Optigan, a keyboard that uses information stored on optical discs. The Landfall cycle flows hypnotically from the ominously elegiac to the jubilant grime beats suggestive of a danse macabre. Its blend of electronic and acoustic strings sometimes lulls lushly, and at other times creaks like rigging on a ship straining in a murderous storm. Anderson traces poetic correspondences between Sandy and other images of absence and obliteration: a book about the extinction of innumerable species of animals, or the curious nature of aleph, the first letter of the Hebrew alphabet, “a letter with no sound, a mental letter”.

There are also ruminations on other people telling you about their dreams like it’s “a movie that you might want to see some time”, or Anderson’s experience of singing a Korean song in a Dutch karaoke bar and seeing the video background of sand dunes go glitchy from a bad Netflix connection, all delivered in the artist’s lilting, fairytale voice, an instrument in its own right, which she sometimes bends into what she dubs “audio drag”, a voice filter that pitches hers into a masculine register to create what she has called (sardonically) The Voice of Authority.

Fittingly, listening to the Landfall soundtrack induces a strong desire to become fully immersed in the multimedia performance of the work, in which the sounds of Kronos are translated digitally into onscreen language projections. But while we wait, there is much joy to be had from an aural memorial of disaster that finds beauty and magic in a catastrophe.

Out now with Nonesuch Records 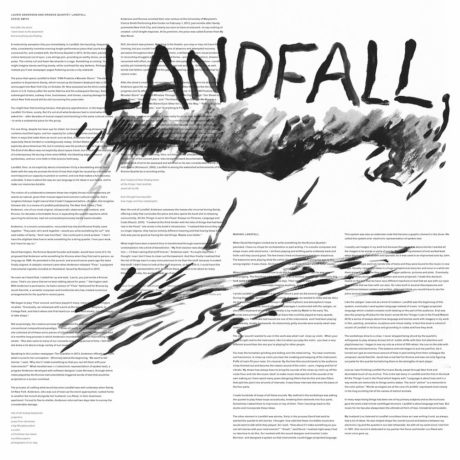