Zooming in on a Black man’s penis hanging out of an open zipper, the photograph Man in Polyester Suit (1980) is the most controversial photograph from Robert Mapplethorpe’s notorious Black Book (1986). The image found itself at the centre of a culture war in 1989, with the North Carolina Senator denouncing the work’s “obscenity” in promoting homosexuality, an outrage sharpened by the fact that it was funded by American taxpayers.

But congressional fuddy-duddies aside, the photograph has since come under scrutiny by those with a progressive politics too. Historian Kobena Mercer argued Mapplethorpe’s close-cropping “invites a scopophilic dissection of parts” so viewers can “scrutinise ‘the goods’ with fetishistic attention to detail” while filmmaker Isaac Julien claimed it re-inscribes the “dialectics of white fear and fascination underpinning colonial fantasy.” What’s more, the photograph’s subject, Milton Moore, later shared: “I think [Mapplethorpe] saw me like a monkey in a zoo”.

“Fani-Kayode freed the Black body from the colonial speculum, reclaiming it as sexually and spiritually complex”

Nigerian photographer Rotimi Fani-Kayode had Mapplethorpe in mind when he said: “Some Western photographers have shown that they can desire black males (albeit rather neurotically). But the exploitative mythologising of black virility on behalf of the homosexual bourgeoisie is ultimately no different from the vulgar objectification of Africa.”

Fani-Kayode’s Golden Phallus (1989) serves as an ambivalent riposte to Mapplethorpe. One of several chromatically rich prints (a selection of which were recently showcased at Hales, New York) produced by the artist just before his death from AIDS-related complications, it shows a nude man crouched on a pedestal, the breadth of browns in the body and background guiding us towards the pop of the penis, painted in vivid gold.

As with Fani-Kayode’s vast but brief oeuvre, raw homoeroticism is strongly felt here, each muscle’s chiselled curves are exquisitely lit in chiaroscuro. But it’s not the blinkered kind which led to Mapplethorpe’s reduction of his subject into an anatomical fragment. Framing the full figure in a solemn contemplation, Fani-Kayode stages a thinking subject first, and a desired subject second.

When it came to the Black body, Fani-Kayode’s approach was distinctly anti-essentialist. Entangling references ranging from Yoruba cosmologies to Caravaggio and punk, the symbols he employed were deliberately slippery.

“Framing the full figure in a solemn contemplation, Fani-Kayode stages a thinking subject first, and a desired subject second”

For example, the Venetian plague doctor mask might allude to the death wrought by AIDS. Yet it could also signify an enslavement to white fantasy, or even the mindfulness of the white-feathered Yoruba bird (eiye ororo). Acknowledging the force of Western iconography while revalidating his own ancestry, Fani-Kayode freed the Black body from the colonial speculum, reclaiming it as sexually and spiritually complex.

“I make my pictures homosexual on purpose,” Fani-Kayode once stated. “Black men from the Third World have not previously revealed either to their own peoples or to the West a certain shocking fact: they can desire each other.” Golden Phallus is not short of desire, but its most transgressive quality is its fashioning of another kind of fantasy: self-awareness. A discourse about representation meets a discourse about embodiment. Concept need not be divorced from feeling. 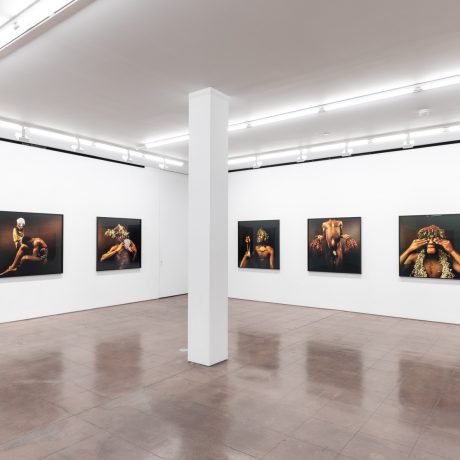