Graphic design and art studio DR.ME has made a name for itself as not just an authority on contemporary collage artists, but as skilled and highly prolific practitioners of the medium, too. The studio’s latest project saw the duo create a publication entitled Strip, playing with ideas of sex, censorship and the possibilities of collage.

Strip came about after a conversation around what defines our studio. Over the last eight years years we have became synonymous with creating collages using a technique in which we literally strip and combine images to make something new. This was the starting point for the series of work that makes up this publication, but we also wanted to explore mixed-media collage techniques, limiting ourselves to using imagery taken from vintage glamour magazines, vintage porn magazines, LGBT magazines and comic books—all a gentle nod to this idea of Strip. It was also influenced by the technique of détournement, in which images are a variation of the previous work, and where the newly created work has a meaning that is antithetical to the original.

Throughout the publication we have purposely censored any nudity, most if not all the images are sexual in content but everything has been censored in a variation of techniques over an array of body types, genders and sexual preferences to question societies attitude to sex and nudity: why is a male nipple ok on Instagram and yet a female nipple is not? Art history proves that the naked human form has always been a point of interest for artists but somewhere along the line we all became body shy, so in essence Strip is a tribute to the human form.

How did it begin? Where can we buy it?

In quite an inauspicious way (the best things always do). Grant who runs Duke’s messaged us through our shop simply saying he liked our work and asking if we would be interested in publishing something with his publishing arm. Initially it will be available from the Duke’s Distribution online shop but I’m sure there will be places for people to go and buy it physically.

Tell us more about your collaboration with Duke’s.

It’s been a really great project to work on. Grant has been really encouraging all the way through the process. As we do design work as well as art work, it was interesting to be on the other side of the conversation—London-based design studio Our Place designed how the publication would look and sent it across. Initially there was a few things that we weren’t sure on; but then we thought about how frustrating it is as a designer to have your ideas questioned and so just decided to say “we trust you” and we’re incredibly happy with how everything looks. The only thing that we really wanted was to have a plastic sleeve covering the publication. This evolved into a screenprinted plastic cover which we had printed here in Manchester. So, it was initiated in Marseille (where Duke’s is based), artwork made in Manchester, designed in London.

You’re very fond of collage: after all, you set yourselves the task of making one a day for a year. What did you learn from that? Are you still making collages on a daily basis?

That was a real challenge that taught us to be disciplined. It’s one thing to create something every day if you don’t have much on your plate but when you have two deadlines for that day and you haven’t got any ideas for what you might make, then it really pushes you to be quite instinctive and trust in your own eye. Our practice has always been based around being quite prolific: although we maybe don’t create a finished collage piece every single day of the year, we will often create a number of new pieces over a relatively short period of time, which in itself has evolved into us creating a monthly online digital PDFZine which is comprised of killed, rejected, forgotten or sketch work which is mostly collage-based. We release it for free, limited to 100 downloads for people to PIY (Print It Yourself). So in a way we are still carrying on in the same spirit as our year-long collage project with this project.

You’re responsible for the excellent book Cut That Out too. You worked with a lot of interesting studios and creatives on that. What was the best part of that project? Any regrets?

Thanks! There have been a few great parts to the project. The initial process of contacting people when we were getting going was very exciting, getting the box with the first copies in from the publishers was a cool moment, seeing it in amazing bookshops around the world is also still something that gives us an amazing amount of pride. No real regrets. As it was a couple of years ago there are people that we feel that we missed out now who should have been in it but that will always happen and is the nature of print—it’s a snapshot of a certain time!

You have a great studio name. How do you pronounce it again? What’s the best misunderstanding it’s given rise to?

DR.ME is pronounced “Doctor” and “Me”; it’s a mis-ordered acronym of our initials (Ryan Doyle and Mark Edwards). We wanted something personal that represented us both equally. So many mispronunciations! They probably stem from the fact that our Instagram/Twitter handle can’t have a dot in it so it’s just @DRME_Studio so people just read it as “DRME”, giving rise to a lot of “dreamy”, “drome”, “durrme”, and then loads of different ways of writing it down: dr.Me, Dr.Me, dr-me, DR me, dr ME, etc. etc. etc. We’ve even got how to pronounce it and write it on our business card now (although that’s for fun).

Strip by DR.ME is out now 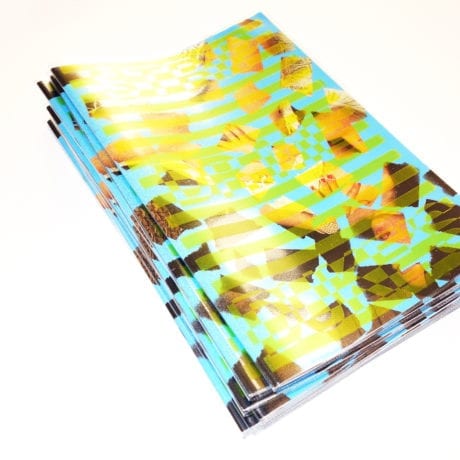