Hailed as a “game-changer… from a man and a company incapable of remaining within known theatrical boundaries” and as “one of the most fully immersive pieces ever created”, Complicité’s The Encounter is currently touring Europe again. Telling the true story of National Geographic photographer Loren McIntyre who got lost in a remote area of Brazil in 1969 and had a startling encounter that changed his life forever, it features a remarkable solo performance from Complicité founder Simon McBurney and a unique stage evocation of the Amazon rainforest courtesy of the design team. Here we speak to stage designer Michael Levine and sound designer Gareth Fry.

The play takes place in the Amazon rainforest, but the presentation of that is anything but naturalistic…

The Encounter didn’t require a rainforest on stage, it just needed an environment in which the piece could exist. We’re in a time that’s extremely sophisticated technologically, so if the sound designer gives you an incredibly strong sound of a train, for example, I don’t need to put a train on stage because the audience will conjure it from the sound, then the lighting can augment that, video can add another layer… You’re constantly weighing how much information you need to provide the audience with to give a sense of place.

How did you become involved with the production?

Simon [McBurney] had started work on the project two years prior and I had seen a presentation of what they had done, primarily as a sound piece. I was really taken by it—I was really interested in this idea of a piece that exists in the auditory mind of the audience rather than in their visual mind.

Simon was making sounds with objects that were the opposite of the jungle itself: plastic bottles of water, video tape, cardboard boxes, things like that. What was particularly beautiful was the transformation that then took place in the minds of the audience—seeing objects that had nothing to do with the narrative and that were being transformed. So you were looking at something and having this strange disconnect between the object and what you were imagining in your mind’s eye. I really liked that. It was as far from naturalism as you could get.

Tell us about the design itself.

I came across these images of anechoic chambers, which are very beautiful, very modern-looking but claustrophobic. There’s a touch of the forest about them because they’re made up of wedges coming from all directions: underneath you, at the sides and on top. It’s kind of like being in a spiky womb. So we explored making an anechoic chamber on stage, which became a kind of wall. The video designer was able to map the visual wedges. We start off in a bare space, where the story is being told as an auditory experience, and as the piece goes along we begin to feed in further layers of visual information.

Where do your ideas come from?

When I was a student in the 1980s you used to go to the library and stack up books and make lots of photocopies, whereas now you can get everything through a Google Image search. You get a certain amount of information through mis-searches too.

As a set or production designer you’re constantly circling around a piece with your collaborators, and looking at it from different points of view. You research when it was set, why it was written, what the impulse behind it was. How do you look at a scene, from the front or side? What is the point of view that you give the audience of the scene? Are we seeing it from up above? As you ask those questions, they begin to give you a certain number of answers. It’s like you’re dissecting something, and through that dissection you begin to understand how the organism works, and the more you look at it from different angles the more you begin to understand it.

You do a lot of opera. Do you prefer it as a form?

It’s not that. It’s just that I get booked well in advance for opera! Opera companies book their seasons two or three years in advance, so it can become difficult to take on a piece of theatre, which often has only seven or eight months’ lead time. I would love to do more theatre. But it’s hard to resist when someone calls you up and says you’ve got something nice coming up in four years.

Anyone visiting your website can see you make spectacular stage images. Is that particularly the case when you’re working on opera productions?

You’re working on a bigger scale, on a larger stage, in opera. Physically it’s a bigger space. Then, on another level, opera has this filmic quality. There’s something in the narrative of the piece that lends itself to a visual language. My job is to serve the story. In opera you can’t divorce the work from the music: you’re serving the music and the libretto. For example, Wagner in his pieces has these two parallel universes: one is the realm of the music, which is cosmic and strange and complex, and then you have these stories that sit within it which are rather simple stories about human nature—stories about fathers and daughters, and brothers and sisters. So you have these smaller stories within this larger landscape which is the music. As a designer you want to explore that in some way.

It’s one of the things about Wagner that you can get lost in the music, the larger landscape, and you might not pay attention to the actual narrative. In a way, for me, the work I enjoy is to be able to juggle the two at the same time, so you serve the larger impulse of the piece without losing track of the smaller narrative.

There are many extraordinary things about The Encounter, but one of the most immediately striking is that the audience wear headsets.

Simon was given the book about twenty years ago and he spent a long time mulling over how to do it. He did some workshops before I came on board and began to think about the story’s epic scale, its claustrophobia and its characters. That the audience wear headphones is something that evolved out of that process of trying to find the best way to tell the story.

They wear headphones so that they can benefit from a technique called “binaural recording”. Can you explain that?

It’s not a new technique, it’s been around since the 1930s. It’s a way of recording sound that essentially mimics the way human beings hear sound. We have two ears and if we hear a sound to our left it hits our left ear, then a tiny, tiny, tiny fraction of a second later it hits our right ear. And that little time difference and the fact it’s travelled a few centimetres further means it’s a bit quieter and it’s gone round our head as well by the time it hits our right ear. Our brain is incredibly clever and can use the tiny differences in the way it hits our left and right ears to work out very accurately where that sound is coming from, to within two or three degrees. Our brains are very good at locating sounds and creating this sense of the world around us.

Binaural recording uses a microphone that’s shaped like a human head—it has two ears on it and a microphone in each of those ears, so it records sound in exactly the same relationship as if we as human beings had been where that head was. As such, it creates these really immersive, evocative recordings of being somewhere. Normal microphones don’t do that in the same way.

This was pretty unique. You don’t normally have to go beyond the M25 to do theatre design sounds. The show is based on the book Amazon Beaming. It’s a true story and the people in the book really exist, so it felt important to do that story justice because of the issues it brings up—about the West’s incursions into the Amazon rainforest and the civilizations there, which are as relevant today as they were when the book was first written. So Simon and I spent a week there with the local community. We went into the forest to record the sounds that became the background to the show. It was an amazing opportunity—you don’t get to do that very often. It was important to get their perspective on the story to be able to tell it from all sides.

The opening ceremony of the 2012 Olympics, the stage version of Harry Potter—you’ve been involved in a lot of remarkable productions. You were also involved with the David Bowie exhibition at the Victoria and Albert Museum in London.

Yes, I was brought in to look at how to present the audio content so that it wouldn’t simply be forty bits of David Bowie playing out of speakers and creating this huge mess. We started looking at this Sennheiser headphone-based system which is very clever and automatically tunes your headphones into the video you’re closest to. It made what was a sound-focused exhibition not feel like an auditory mess.

Until 5 May at the Barbican, London, subsequent tours to Antwerp, Berlin and Moscow 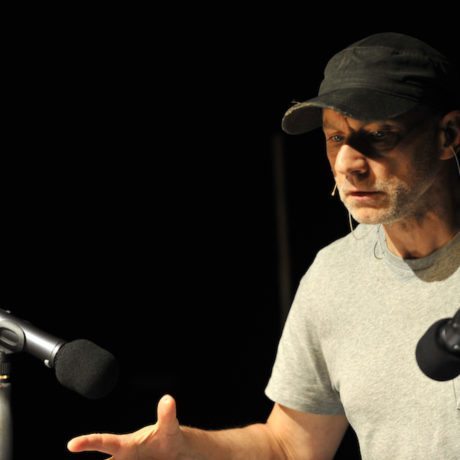