“Where do you come from?” As someone who is mixed race, it is a question often asked of me, reminding me of my own hybridity even when I choose not to answer. Tarik Kiswanson knows the challenges of cross-cultural status well; Palestinian by birth, he grew up in Sweden before living in London and settling most recently Paris. The charged politics of identity and exile run through his work, frequently examining translation and mistranslation; perception and misperception. Sculpture, performance and poetry… his thematic interests take many shapes, from highly polished steel and brass abstract sculptural works to collaborative performances with pre-adolescents. Together, they draw into question the cultural histories that we each carry with us, unpicking memory and provenance to reveal the overlaps and instabilities brought about by the global movement of people and products.

As part of the Gwangju Biennale in South Korea, Kiswanson is currently exhibiting a new performance and sculpture in the Palais de Tokyo-curated Pavilion Project. The exhibition fittingly takes as its starting point the slippages that occur in language when lost in translation. Set in the Gwangju Civic Center, a remarkable brutalist space with a soaring central atrium, twelve artists respond to the ambiguities that occur when distinct domains and cultural codes meet and transform. Kiswanson produced his new works in the city of Gwangju itself, working with twin eleven-year-old brothers to produce a performance in a language that he cannot speak himself.

How did you first begin to make work as an artist? What are some of the early memories that have shaped your practice?

I first started to write during the period when I was growing up in Sweden, not in Stockholm but in the south, in the countryside. It’s a very Swedish community, and my parents emigrated there in the 1980s from Jerusalem, Palestine. It was a period of much self-revelation, I became conscious of a lot of things. I started to write at the age of eleven, and I often think of it as the forgotten age of childhood, which is also how child psychologists occasionally refer to it—between the first developments of a younger child and the introverted teenage years a lot of crucial things happen. It is also the moment you begin to understand what race and class mean, privilege and poverty. That was a revelation for me, when I realized that I had a different skin colour, my family spoke a different language and we had different traditions from everyone else in the white Swedish community I was in. I didn’t feel Swedish, but I didn’t feel Arab either. I was suspended somewhere in-between. My early writings and art making were connected to this. I started to write poems, scribbling down my thoughts.

“There’s a longing, a longing to belong, that is behind my work”

I think I’ve always been questioning my identity and where I’m from, and this feeling of being rootless, because very early on I understood that I wasn’t like everybody else. It’s about living with the sensation of belonging nowhere—a rootless identity that constantly travels between different conditions and contexts. It is an identity that is born outside the idea of land and nation, and for me it’s not just about the political but also about how the world has transformed. Through the great flux of immigration and globalization that we have been experiencing since the 1980s, this has become the story of many. We are merging, surpassing physical borders to become something different. Being from many different cultures is very rich, but it can also be very violent, and very hard. There’s a longing, a longing to belong, that is behind my work. I believe a lot of people can relate to that.

You were initially a writer; what led to your transition to visual art?

I simply wanted to use another language. Transitioning from word to form is for me going from one language to another, using other signs and communicating through other means. The core of my work lies in the connections between things, one informs the other. It has always been hard for me to imagine things as separated entities when developing my work, in my opinion there is only one way of existing: in communion and connection.

A lot of my writing in the beginning was about memory and memory loss. Some of my first works were sculptures that I produced under the title What We Remembered. These were abstract works, held together with melted silver. When my family left Jerusalem, they took everything with them, from the cabinets and chairs to the tables and the silverware. These objects followed my family’s trajectory through exile—from Jerusalem to North Africa to Jordan and finally Sweden where Kiswani became Kiswanson in a brand new immigration office. I have used that same silverware to assemble my metal works for many years. The history of my family is in the seams of my works. It is often in the seams that interesting things happen—a space of tension where things connect, overlap, merge and fertilize.

How autobiographical is your work?

Using my family’s silverware is a very personal thing, but I think that it’s something that everyone can really relate to, almost using the past to create a future—but a future that is quite shaky and unstable. My sculptures from that period were very thin, very precarious, they shivered when you walked next to them. This idea of instability has run through a lot of my works, even thinking about ways of seeing. Many of my artworks consider vision, and my poetry speaks about ideas of perception, and whether you can believe what you see, and seeing differently with other eyes.

I believe any body of work is autobiographical, it is impossible not to be. From the moment we decide to create we undoubtedly enter a space of personal questioning, and we want to give a form to the ideas we develop. But making and presenting art is also about reaching out, exteriorizing the internal and taking a position. Throughout my life I have explored the question of the hybrid identity and being “in-between” through writing and sculpture. I believe these are subjects many can relate to. For me, it has always been about that—using myself and my own trajectory to speak about something much larger and vaster than myself.

What has been your experience of beginning to work with performers, and particularly with young performers, of directing them and collaborating together?

It’s been important to have performers who enable me to return to the age that was so significant for me—eleven was an age of self-revelation for me—and it’s an interesting age to work with as they are in a period when they are constantly observing everything around them and questioning what they see and experience in their lives. It’s completely extroverted, which is ideal to understand how they see the world, and their optimism and energy. Their closeness and openness with each other is also something that I found highly fascinating. Working with eleven-years-olds in Paris at Lafayette Foundation, I very quickly noticed how at ease they were with each other, fearless of body contact and closeness. Much of these things we lose as we get older.

I intentionally work with kids who have never done this before, regular school kids but with a drive to explore. Most of them come from multiple, hybrid cultural backgrounds. My writing is something that is often developed in their presence and through the dialogues we have. I’ve been in Gwangju for almost a month working with twin eleven-year-old boys, and we produced the costumes here.

What have you learned while working in Asia for this period leading up to the Gwangju Biennale? How has it changed or influenced the work that you’ve produced?

It’s been an intense period, but I have enjoyed it very much. English is very rarely spoken. When working on my new performance piece “The other side of the lip” here in Gwangju with the twin boys Seyong and Guyong, I wanted to be confronted with just that: how do you develop a new work with local children without speaking their language? It ended up being a highly intimate collaboration where instead of talking we would use our bodies to communicate. Though we had a translator at times, most things were expressed through movement, which meant that I had to be more physically active in the way that I was rehearsing with them.

I’m also showing a bronze sculpture “Departed” (2018) that I produced at a remote foundry two hours from Seoul in the middle of the jungle. The sculpture has a hybrid body, the head of a French boy mannequin from the early 1950s attached to the body of a child “Made in Korea” window display mannequin. It was very challenging as the foundry is quite rural, but the human contact I had was rich in emotion and kindness. My one-and-a-half-month period here is also full of funny anecdotes!

That feeling of constantly being at the edge of total incomprehension is interesting. I sometimes had the impression I had lost my capacity to speak, which in return meant I wrote immensely during the hours we weren’t rehearsing. The best thing about the experience is taking the risk and not knowing if it will work out. New works can be produced anywhere, it doesn’t have to be shipped. These works encompass many invisible stories of my time here. They are made and rooted in the region in which they are shown, which is what I like the most about this whole experience. 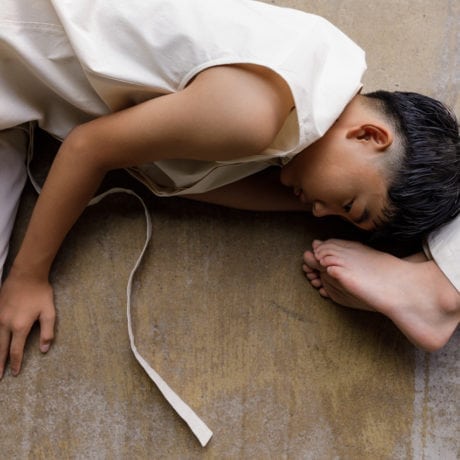