As members of the artist group Common Culture we have a longstanding interest in the use of comedy as a means to provoke and unsettle established rituals of cultural consumption, to bring about critical reflection on the values and structures that underpin them. In 2016 we curated two exhibitions on art and comedy, Double Act, held simultaneously at the Bluecoat, Liverpool and the MAC, Belfast. From out of these shows we have developed our exhibition The Laughable Enigma of Ordinary Life, for the Arquipélago, Centro de Artes Contemporâneas in São Miguel, the Azores, allowing us to explore the fertile relationship between comedy and the everyday.

The title Double Act not only reflected our joint curatorship over two venues, but the way in which comedy involves, as Andrew Stott has put it, “a continual awareness of the possibility of reading a scenario in two different ways, of a division in comprehension and the co-existence of parallel ideas”. The comic effect of a lot of the contemporary art included in Double Act results from the way in which it sets up a doubled experience, its humour is often the result of putting two disparate and opposing ideas together.

Sometimes this doubling involves a form of mimicry or appropriation that entails a comic falling short: for example, Kara Hearn’s videos showing homemade reenactments of emotional and dramatic scenes from well-known films. The joke with Hearn’s work is the collision between two worlds. In borrowing and trying out a vocabulary of dramatic responses, the work is not emotionally denuded. The shortfall arises less from her performances than the economy of their DIY domestic production. Her videos rely on the fact that we know the references, both to the films and the world of fantasist play-acting of obsessive fans reliving scenes and lines. They are cathartic, intense dramatic moments that are copied, but depleted due to constrained production values. In this respect, it is a comedy of the fall, from the economically and emotionally charged Hollywood blockbusters to the ad hoc mini-dramas performed in her bedroom.

“We were keen to explore ways in which comedy alters our understanding of the everyday.”

In the case of Pilvi Takala dressing up as Snow White and trying to enter Disneyland Paris, her performance does not fall short, but as an adult dressed as Snow White she is able to stage a canny collision between the supposed innocence and purity projected by the Snow White character and Disney’s “wicked” capitalist property rights. Mirroring the stepmother in the Snow White story, Disney is revealed as obsessed with maintaining control of their image and the destruction of competition. In the video documentation of the incident, Real Snow White, we see children repeatedly asking to be photographed with her, while anxious security men, trapped by the need to protect Disney’s property rights and still maintain the mask of innocence upon which Disney’s corporate fantasy dependents, are left floundering, unable to satisfactorily explain the apparent contradiction of why Snow White is being prevented from entering Disneyland.

A strategy that many comedic works use entails a doubling through quotation. Keith eentry’s Estate Paintings, for example, were important to us because of this. His abstract paintings conflate references to suprematist art and evoke its socialist ideals, with aerial plans of British housing estates, more readily associated with the failure of modernist social dreams. In Spitalfields Estate (1996) the reiteration of the visual language of geometric abstraction appears like a nostalgic yearning for the formal vitality of Russian suprematism and the revolutionary social and cultural ideals it once embodied. But with Malevich’s work now decorating the mansions of oligarchs, and modernism’s utopian dreams of social and cultural transformation long since withered, to make such paintings today seems like a joke, and a cruel one at that.

The title of our Arquipélago show comes from a line in Simon Critchley’s book On Humour, and refers to comedy’s propensity to alter our perception of the everyday, the way in which “jokes tear holes in our usual predictions about the empirical world”. Here we were keen to explore ways in which comedy alters our understanding of the everyday. All the art in this show springs from ordinary life, which is always about our experience of the ordinary. What constitutes the “ordinary” is obviously framed by the specific circumstances each artist experiences, but these are governed by social relationships and conventions, a shared commonality with the audience, making their art and their humour legible. The comedic makes its mark in this show by the different way artists feed off and translate the everyday.

In David Sherry’s Running for the Bus, he picks a familiar daily mishap and turns it into an absurdist drama, through repetition. Sherry deliberately breaks with a routine order. Arriving laden with shopping, he sits and waits at a bus stop. When a bus arrives, he is oblivious to it and does not stir. It’s only when it leaves that we see him get up and chase after it, both hands holding full shopping bags. The detail of the bags is significant, it adds to his plight, and the pathetic image of him running after the bus. This is the clownish, impudent dumb act—a comic fall. The artist is not special, he falls and fails and keeps on failing. Viewed as art this repetitive action strips performance art to a pathetic baseline, an act of stupidity and ineptitude, which of course is the source of so much slapstick comedy.

As artists working as curators we were keen to send up our own pretensions and cast an eye over the rituals and conventions that govern the curation of exhibitions. An integral work for all three shows was Maurice Doherty’s neon I Slept With The Curator To Get This Show (2016)—a one-liner that succinctly undermines the assumed impartialities that lie behind curators’ choices to show some artists rather than others. Doherty’s work exposes the vanities and insularities within the art world. It also makes fun of artworks that reveal the conditions of their own existence, with a nod towards Bruce Nauman and Joseph Kosuth’s neons. But as a transcription of handwritten text it also mimes the mannerisms of Tracey Emin’s neons and the way they trade on intimate and frank sexual disclosures.

“One aspect of all the shows we have curated concerns the problem of analyzing comedy and our attempts to bring it under critical scrutiny without destroying it.”

Doherty’s one-line gag builds on the competitive gossip of an insular and corrupt art world, but counters the discrete whispering with an act of overt declaration. The focus of the joke is the curator, the figure who decides who is or is not included in an exhibition. To this extent the frankness of the neon declaration serves to unsettle the legitimacy and ethics of a group of often self-regarding art world professionals whose ranks have expanded to dangerous and unsustainable levels in recent years, thanks to the proliferation of a host of postgraduate curating contemporary art courses. But the luridly bold statement also announces the unapologetic complicity of the ruthless careerist artists prepared to do whatever it takes to be included in a show. Doherty’s neon will always function like a joke in the company of other art: a disruptive, rebellious intervention, a comic “whistle-blower” casting doubt on the ethical integrity of the system in which it operates.

A new video and series of drawings by Erica Eyres, made for The Laughable Enigma of Ordinary Life, allowed us to present the painfully leaden nature of an academic conference committed to the dissection of humour. Evidently bored with the academic discourse, Eyres instead made a series of drawings of the people attending and presenting papers at the conference on comedy she attended. Here the joke is the pall of gloom that seems to pervade the event. People appear sad and depressed, alienated and detached from the impact of the humour they are studying.

The Laughable Enigma of Ordinary Life, presented in the magnificent space of the Arquipélago, allowed us to realize a remarkable sculptural installation by Richard Hughes, which became in many ways the centrepiece of this show. Hughes works with and against the blankness and banality of urban space, animating its structures with an inventive playfulness of form that transforms the overlooked and the everyday into something extraordinary. In his Pedestrian series of sculptures, Hughes choreographs an encounter with concrete lamp posts that have escaped their utilitarian grounding and mutated into gangly pairs of legs, jauntily throwing shapes and seem on the brink of legging it from the gallery. The work speaks to our capacity for imaginative transformation, to see beyond the habitual and encourages us look at the world again. It runs rings around all that is predictable.

The Laughable Enigma of Ordinary Life 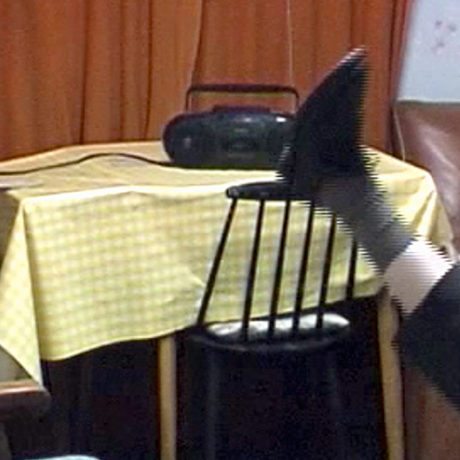 The unusual restoration of the religious fresco by a local resident led to countless memes and international ridicule. But is it a pop art icon for the internet age?
Read More 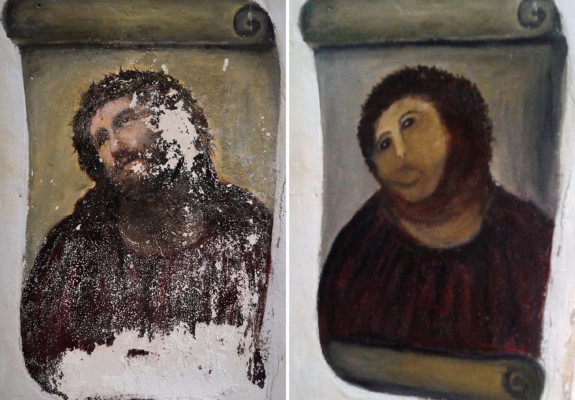 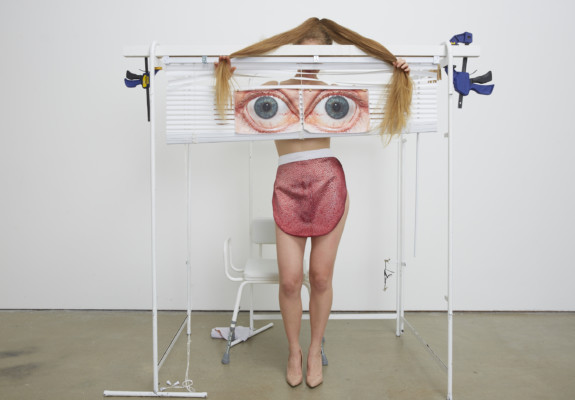 As we prepare to open Ridiculous! at Elephant West, a raucous exploration of artists who can have a good laugh at themselves, discover seven of the names on show.
Read More