Do people ever tire of scaring themselves? It seems today, with TV shows like The Terror and The Haunting of Hill House, as well as the remake of 1977 cult classic Suspiria, we are living in the age of the horror shocker. Tom Butler’s new work emanates a ghostly energy that chimes with the times.

How did you start making your cabinet card portraits?

I started appropriating cabinet cards when I moved to America in 2010. I had already been using vintage postcards as miniature readymade environments but working on the portraits took more courage. A landscape postcard could be divided up with a drawn-in barrier or filled with imaginary bugs, but now I was working with a sitter and I found myself in a mini relationship. I had to collaborate to find how to alter this new person and with that find their new identity. I knew I wanted to conceal them but in doing so it seemed to reveal something unique about both of us. Once I made a few, and found I was building a community of sorts, I couldn’t stop.

As well as altering the bodies of anonymous Victorian sitters, you’re using your own body in the work in this show. Can you tell us a little about these new series? Where did they begin and do you consider them continuous with the older series?

They certainly are but the process is different because I can alter the figure before the photograph is taken, and I don’t need to use gouache if I incorporate concealment into the poses. I use myself in the work because I want a chance to be the sitter, which has forced me to think three-dimensionally about concealment. I have always felt a kinship with the sitter’s desire to hide and so this felt instinctive.

There are two series of photographic self-portraits in Ensemble. The first, Figures, are taken with my tripod mounted DSLR and a remote shutter in my studio in Portland. Here I attempt to reduce myself to a singular form. Instead of presenting myself in a recognisable way, I appear concealed, ambiguous and without a definitive shape: is the figure faceless or is it concealing its face? Is it captured hiding or performing?

The second are my Homunculi series. Instead of reducing myself to a single figure I am trying to create something singular out of multiple parts. I photographed individual parts of my body and assembled them in-camera like a kind of abhuman jigsaw puzzle. This is a Jekyll and Hyde series in which I feel as though I am playing both the mad-scientist by documenting the homunculi—traditionally miniature humans which alchemists and magicians believed they could create—and the subjects themselves that don’t necessarily wish to be documented.

“We all hide or bury our personal demons as best we can but they can rise to the surface in moments of anxiety. We often forget that having them makes us human”

You’re using a phrase from William Hope Hodgson’s 1914 short story The Crew of the Lancing as a kind of epigraph for the show: “In spite of their unearthly strangeness I had a feeling that there was something familiar about them.” What is Hope Hodgson’s story about and how does it relate to the pieces on display in Ensemble?

The Crew of the Lancing is a story about two ships told from the point of view of a crew member. The Lancing is the name of a ship he sees approaching in the distance, a ship and crew that are familiar to him. Or so he thinks. As The Lancing nears the crew member notices that something is not right. The Lancing’s crew look strange—part-human, part seal and appear hostile to him. I won’t tell you the end. This is the moment that’s important to me. The moment when he sees the mutant crew for the first time they are both “unearthly” yet “familiar”. This is key to how we can recognize things that are frightening to us. Did these monsters destroy the crew of the Lancing or are they the crew of the lancing? Are they looking to devour or are they seeking refuge? Could this happen to us as well? Ensemble contains a lot of uncanny images. We all hide or bury our personal demons as best we can but they can rise to the surface in moments of anxiety. We often forget that having them makes us human.

How “Gothic” is your work? Is there a serious strand of gothicism within contemporary art?

I return to tropes of concealing and revealing which is central to the genre’s imagery and fiction, and I find the Gothic is never far away when one starts looking. Only last week I found myself viewing Doris Salcedo’s broken / reassembled desks (Tabula Rasa) at White Cube Bermondsey through a Gothic lens. They seemed to vibrate with ghostly life because of their damaged incompleteness. There is renewed interest in ghost stories and frightening TV shows too. I’m thinking of Shirley Jackson’s Haunting of Hill House or the remake of Dario Argento’s Suspiria. Perhaps we need to channel our anxieties through more entertaining forms of terror to make them bearable, or even to comfort us.

“I knew I wanted to conceal my sitters but in doing so it seemed to reveal something unique about both of us. Once I made a few, and found I was building a community of sorts, I couldn’t stop”

Can you recommend three works of Gothic fiction we should all be reading this winter?

For me, almost all roads lead back to Frankenstein by Mary Shelley, published in 1818. If you’re an artist and you haven’t read it, buy it today. It seems to sum up the wild optimism and promise of creation that artists can feel, juxtaposed with the realisation of responsibility of having brought something new into the world. More than once have I feared my work might come back to get me.

The Haunting of Hill House by Shirley Jackson feels like a vital read at the moment. Her work unsettles me like no other. Even if you’ve seen it on TV the book is better. Without giving it away, the book explores the location of the supernatural and the far more frightening notion that instead of ghosts being out there, it is us who are haunted.

On this idea from a contemporary writer, I would also recommend Jennifer Finney Boylan’s I’m Looking Through You. She draws on her own experiences growing up transgender in a haunted house. I was twenty-five when I read it and there’s an attic scene that made me keep the lights on. 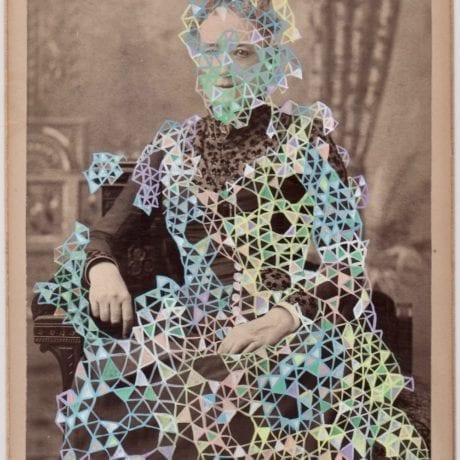