Five fat men stand on a red stage dressed like the cast of Reservoir Dogs: black suits, white shirts, black ties. They stare us out, looking cool as they can, and they start to strip—not quietly, not demurely, but like proper, plus-size Chippendales.

Joe Spencer, bald with a bushy ginger beard, shimmies his shoulders as he loosens his tie. Asad Ullah, a financial consultant with clear plastic specs, flashes open his jacket to ironic whoops. Cherubic Sam Buttery writhes in sultry slow-mo as the bass thump of the music builds, then cuts out abruptly. “What’s so fucking funny?” screams Scottee into a mic at the side of the stage. “What. Is SO. Fucking. Funny?”

“They strip not quietly, not demurely, but like proper, plus-size Chippendales”

Fat Blokes describes itself as “a sort of dance show.” Over ninety minutes, five men—all fat and all too aware of their fatness—trot, twirl and spin through a series of choreographed routines. They march in deadpan geometric formations to Kraftwerk-style computer pop, and swig Diet Coke to the ba-da-ba-da-bum beat of Etta James at full holler. Ella Fitzgerald’s Dream a Little Dream accompanies a tender pas-de-deux as two big male bodies wrap around one another like silver screen lovers, extending with some of that Ginger Rogers grace.

Dancing takes daring at the best of times—perhaps more so for men, more still for fat men, and more than ever on a big public stage. None of the four fat blokes standing with Scottee onstage is a dancer, by trade or by nature. All four responded to an open nationwide call. Dancing in Fat Blokes, they put themselves—and their bodies—right on the line.

Scottee’s a cult figure on the queer cabaret scene. For years, he ran a fatcentric beauty pageant at The Royal Vauxhall Tavern, Hamburger Queen—a celebration of big-boned beauty dressed up to the nines, doing party tricks and comedy cooking routines. Contestants in sparkly sumo suits and drag created chocolate poos and sugar-sprinkled blocks of lard. They wobbled, jiggled and stuffed their faces full. “You feel as though you have entered a different universe,” wrote psychotherapist and artist Charlotte Cooper after attending. “One where fat people are as much a part of things as anyone else.”

Fat Blokes does the same in a more mainstream, middle-class space. By putting fat bodies on show it both makes fat visible and renders it invisible. The more we see it, the less noticeable it becomes.

“Fat is a politic,” Scottee’s prone to saying, but Fat Blokes makes clear that it’s not simply one thing. Fat’s plural. He dedicates each dance with a spoken-word rant: to the headless bodies used on news reports; to before shots, the epidemic, the ticking time bomb; to those brave enough to eat in public and to those that are not. All four of his fellow performers are gay, all come from different class backgrounds and all have a different sense of their size—even, individually, on different days of the week.

“Fat is a politic”

Publicly, Fat Blokes frames itself as kind of a sideshow: “Roll up, roll up. See the fatties dance.” It lures an audience in with the promise of spectacle, a sight to behold, then sets about subverting that gaze. It’s subterfuge. Instead of an invitation to gawp, maybe to marvel, perhaps to point and laugh, it delivers a space for fat men to be seen and heard. Together, they take ownership of fat. Scottee’s speeches repeatedly slide from “I” to “we”.

Between each routine, the performers deliver an autobiographical speech each, opening a fridge and pulling out a mic. Ullah’s early confession that he’d take a “thin pill” is subsequently offset against his tearful revelation of becoming estranged from his dad. Gez Mez talks us through his weight fluctuations, before announcing his current state of happy self-confidence. Buttery recounts, in quite shocking detail, a fatphobic physical attack on the streets of Soho: a champagne flute smashed against the back of his head, slicing open an artery. It could have left him dead.

For all four men, fat has caused pain and shame, but onstage, in Fat Blokes, it’s shown off and celebrated. Not absolutely. One routine, Eating in Public, offers them a choice: to eat a banana facing the audience out front, or to turn away and do so unseen. It varies day-by-day, depending on how each feels. When one performer turns his back, Scottee throws him a wink; one that quietly says, “I get it, we’re here.” There is, he orders his audience each night, to be no shame and no judgement. Only support and care.

And Fat Blokes is shaped with a real sense of care. It takes pains to put its four performers at ease and grant them control over how they’re seen. Marty Langthorne’s gentle lighting casts a warm glow: never too stark or too bright. Often it throws the five bodies into artful silhouette, showing off their outlines without exposing their weight. You see shapes, not sags; figures, not flab. It lends them real definition—the very thing shorthand might say they lack—and, cast in shadow, they become abstract and alluring.

Swapping suits for white smocks shows these bodies at their best: white eradicating contours, the shape hanging well. Their bare legs are on show, muscular, shapely and strong—no fat here—and the cute outfits, miles from masculinity, stops bodies being weighed off against one another. They’re flattered by Lea Anderson’s choreography, all simple steps done well, gestures that let their physicalities shine. She’s instilled technique too: how to shimmy like a star, how to hold a really good pose. It’s as if this gang of four have been through finishing school, given the confidence shot of a lifetime. When Gez Mex bursts into a full-blown Flashdance-style solo, spinning like a dervish, bumping and grinding like Beyonce, it’s breathtaking. He owns the stage. They all do.

“The lighting lends them real definition—the very thing shorthand might say they lack—and, cast in shadow, they become abstract and alluring”

Spencer’s story, perhaps, gets to Fat Blokes’ heart. Bullied as a teenager on account of his size, he refashioned himself as a full goth: Slipknot T-shirts, tattoos, blond hair dyed jet black. The laughter still came, the jokes and the jabs, but Spencer says fondly, it was within his control. He made himself more visible. He chose how he was seen.

That really is what Fat Blokes achieves. It doesn’t simply encourage us to look at the five fat bodies onstage. It instructs us—orders us—to look in a certain way. “This time,” Scottee barks at the show’s start, “you’re going to see us and you’re going to desire us.” By the final routine, when the five finally fully let rip, they’ve taken our gaze under their control and you do. As Beth Ditto screams out Standing in the Way of Control—even the soundtrack is full fat—they whip off their smocks, bare their chests and jiggle with wholehearted gusto. It’s not funny. It’s fantastic. You want to punch the air.

Until 11 November at Southbank Centre, London 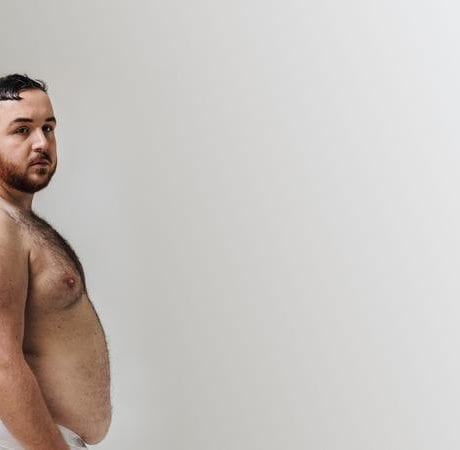 Don't miss out.
Get the latest from Elephant straight to your inbox and 20% off your first purchase.
You can unsubscribe anytime.

This website uses cookies to improve your experience while you navigate through the website. Out of these, the cookies that are categorized as necessary are stored on your browser as they are essential for the working of basic functionalities of the website. We also use third-party cookies that help us analyze and understand how you use this website. These cookies will be stored in your browser only with your consent. You also have the option to opt-out of these cookies. But opting out of some of these cookies may affect your browsing experience.
Necessary Always Enabled
Necessary cookies are absolutely essential for the website to function properly. This category only includes cookies that ensures basic functionalities and security features of the website. These cookies do not store any personal information.
Non-necessary
Any cookies that may not be particularly necessary for the website to function and is used specifically to collect user personal data via analytics, ads, other embedded contents are termed as non-necessary cookies. It is mandatory to procure user consent prior to running these cookies on your website.
SAVE & ACCEPT