Electronic music regularly gravitates towards space and otherworldly themes. The British musician and producer Actress (aka Darren Cunningham) has brought an out-there intensity to his many varied soundscapes; for his collaboration with the London Contemporary Orchestra, he explored inspirations including the Lageos (Laser Geodynamics) satellite. The Lageos missions were originally launched in 1976, and the spherical spacecraft is a thing of weird beauty: studded with laser reflectors, giving it the appearance of an extra-terrestrial glitterball.

The music, too, evokes its own strange and heady allure. Actress x LCO brings together different realms, with a mutual passion for experimentalism, “hybrid” dimensions and unexpectedly playful edges. This collective project has its roots in the debut live date at London’s Barbican Centre in early 2016 (then entitled Momentum). While that first encounter seemed to be feeling its way, they’ve since developed vivid new material and reworkings for concerts in Moscow and at London’s Tate Tanks (for 2017’s BBC Proms), and created a collaborative album, Lageos (Ninja Tune); this month, they’ll also return to the Barbican for a new show, featuring a bespoke visual installation by Universal Assembly Unit.

“I wanted a classical-leaning record with electronics that was unlike anything you’ve heard in a contemporary sense,” says Cunningham, whose Actress compositions have spanned digital funk rhythms to “R&B concrète” and shadowy nightlife moods, never settling in a single genre. “We didn’t want it to be a sanitized studio/live recording; I think that would have been too conventional. This record is quite surreal in parts: it’s violent, it’s beautiful, it’s drone-y—there are different moods and vibes.”

Cunningham initially became fascinated with creating source recordings within the Barbican’s brutalist architecture. “I was thinking about the depth of the space where this was going to be performed,” he says. “Then the depth of the musicians became more of a concern for me: getting the most out of the instruments, the players and myself.” He studied the “micro-composition” theories of musician and designer-engineer Iannis Xenakis; he also found himself digging through recycling bins for musical materials, which the ever-intrepid LCO melded with their orchestral instruments.

“This record is quite surreal in parts: it’s violent, it’s beautiful, it’s drone-y—there are different moods and vibes”

“When it came to the recording process, it was almost a case of deconstructing the Momentum material through capturing each instrumental line separately and then handing these ‘stems’ over to Actress to process, manipulate and reconstruct in some cases, eventually arriving at Lageos,” explains LCO co-artistic director and co-principal conductor, Hugh Brunt.

“I like how Actress has in turn responded to our re-interpretation of the track Hubble, and Galya Beat for me is a dynamic, muscular track that pits an acoustically-distorted violin against a drum machine triggering glitchy samples. There are also tracks such as Chasing Numbers and Voodoo Posse Chronic Illusion where respectively there’s little to no processing, so the ‘electronic’ timbres are being created purely through acoustic means by the eight instrumentalists—that might involve the use of plastic bags to emulate white noise or an EQ’d hi-hat, house keys struck on the double bass tailpiece or Blu Tack to dampen the piano’s upper strings and create a percussive, almost gamelan, sound.”

Lageos does evoke echoes of other space atmospheres, from Brian Eno’s Apollo to Jerry Goldsmith’s sci-fi movie scores; it is also an elegant and immersive collaboration, orbiting between electronic and acoustic realms: “You’re entering the world that I like to occupy,” murmurs Cunningham.

There is a sense of continuity here, in many respects. Photographer Mehdi Lacoste (who worked with Cunningham on the gleaming cyborg-style visuals for Actress’s 2017 album AZD) has returned on the Lageos album artwork, while the live performance reunites the LCO with art/tech design studio Universal Assembly Unit, having previously worked together during Ron Arad’s Curtain Call installation at London’s Roundhouse (2016).

“For Curtain Call, the orchestra was in the centre of the curtain, within our 360° projected visuals, and the audience moving around,” recalls UAU co-founder and director Samantha Lee. “It had the feeling of travelling in space, but also being in a massive cave. It was very slow-moving and transcendental. “The Lageos idea was really interesting because it carried on this idea; we wanted to physicalize the idea of sounds from outer space. The staging is exciting, because it creates a cinematic quality, though it’s frustrating, because audiences can’t walk through it.”

“Music is like a sculpture: I can see it, feel it, taste it”

The set-up might be minimal, but UAU’s designs have earned their rep for captivating effect. “A lot of it is reliant on the movement of light,” says Lee. “There’s a horizon bar behind the players, and a semi-circle of footlights in front of them. We create a cloud of haze, so they’re surrounded; we’re playing with the idea of planets, orbits, satellites—not directly referencing the tracks, but coming from the same world.”

“The visual aesthetic is always an important consideration,” adds Cunningham, whose multimedia collaborations have also included Eddie Peake, Eve Ackroyd and videographer Nic Hamilton. “I think all the visual artists I’ve worked with have this implicit inbuilt feeling for the music. And for me, music is like a sculpture: I can see it, feel it, taste it. I want to get that across as much as possible: the physicality of what we’re delivering.”

Out 25 May with Ninja Tune 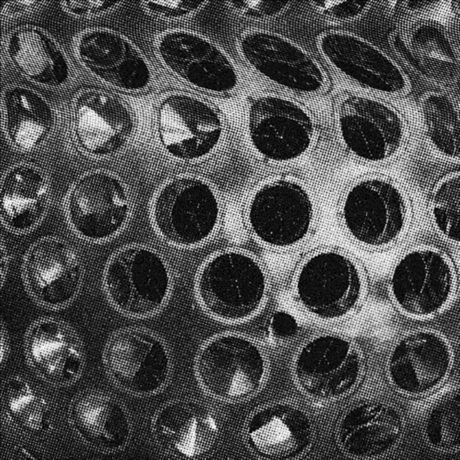