Comedy isn’t the first thing that came to mind when I thought about your work.

[Laughs] I’m really curious as to why you didn’t think so!

I just see the topics you discuss, like the politics of gender and race, as deadly serious, and you explore them in a very confrontational way sometimes. How do you see the relationship between your art and comedy?

I think it’s a macabre or dark humour… I’ve been thinking about it, and there’s always been an underlying tension of humour in my work. For example, with the piece where I urinated on the dividing wall in East Jerusalem, that was a deliberate attempt to invite some kind of visceral reaction like awkward uncomfortable laughter—and that’s the tension I always try to work with. There’s an ominous edge to it, I think, but you’re able to stimulate a different vibration because of the reaction. It stems from exorcism and ritualistic art, traditional healing—and laughter, dance, singing all have a big part in that.

I don’t want to be didactic. I find the art of this century so far is so didactic and immersed in documentary photography, which is not fucking art! I’m an artist who uses photography but I’m not a photographer, I’m interested in the corruption of it. My first camera was bought from the drug dealer down the road from my grandmother’s house for about thirty rand. I’m back in the neighbourhood where I was born in Durban, which is the root cause of my humour. In the apartheid landscape my neighbourhood was a Coloured neighbourhood, and it was a pretty dangerous neighbourhood, there were gangs on the street—so everyone here has this dark side to the way they tell stories. It’s part of this whole condition of the person of colour in the postcolonial era. Humour isn’t innocent—it’s a way to deal with trauma. But my four-year-old tells the most wonderful, innocent jokes. He makes me laugh a lot. Recently he said: Why didn’t the cow cross the road? Because he was eating chicken! If he was around when I was a kid he would’ve been beaten up! They would’ve said cows don’t eat chicken, don’t be stupid!

“I find the art of this century so far is so didactic and immersed in documentary photography, which is not fucking art!”

Would you ever do stand-up comedy?

I have a desire to be a stand-up comedian and I have this idea of a piece I want to do and it always works well in my head. If I’m bawling, telling unreal stories, I always have laughter inside me because it’s so melodramatic! I love the way comedians present themselves, it’s almost evangelical.

Talking of evangelical, you were once on stage with a choir…

I did a piece at the Philharmonie in Berlin where I beat the choir of the Haus der Kulturen der Welt [House of World Cultures] while they were attempting to sing Peter Tosh’s Downpressor Man in German. And you can’t sing reggae in German! I was determined I was going to crack the shield that surrounds the earth by performing on this site where these spirits are incarcerated—the Philharmonie is built on top of a site where 250,000 people were eugenicized. People were yelling at me to get off the stage, it became very anarchic in that no one has ever dared to heckle, let alone speak out, during a performance in this revered and austere place. People were shouting: We’ve had enough now, you’re going on and on. The piece was entitled Duppy Conqueror after the Bob Marley and the Wailers song. I had heard that it came out of them being forced to perform for the dead in order to conquer their stage fright. They would play concerts in the cemetery at night to the “Duppys”.

You do obviously do some outrageous things in your performances—has using comedy in your work ever backfired?

[Laughs] Yeah! I did a piece while I was at Goldsmiths doing my MA called Shitting Bullion, where I ate a colonial meal the night before and then planned to defecate in front of my class. The thing is, despite drinking a lot of coffee and wine, everything had turned to putty and I was constipated for seven days. I was so constipated when I tried to execute the piece it was like I was giving birth, I was screaming… but they sat and watched it. Then after I was done, I was supposed to say, “Take a look at the art in the back while I go and wipe my rear.” When they all started to discuss the work, my seminar lecturer said: “Actually I think Tracey thinks Goldsmiths is shit and she doesn’t want to be here.” He hit the nail on the head! Everyone turned round and started shouting: “Fuck you, Tracey Rose!” So that backfired in the sense that no one liked me after. [Shrieks with laughter.]

How do you deal with stage fright?

Alcohol has always been the one thing that’s given me strength, as it does for most people on the planet, but I don’t really want to do that, I don’t drink as much as I used to. I met a psychologist who wanted to remap my mind. I was telling her about some of my work, she thought I was mad, but I just explained I’m an artist. She said I had ADD but I said no, I just haven’t eaten! She was going to remap my mind to help with my stage fright, but I told her I need to use my stage fright in my work, it’s this vulnerability I need to put in the work. I’m the type of person that has this default setting—it doesn’t matter how good I look or feel, if my make-up is good and I’m wearing a nice dress and heels, I’ll end up with a broken heel and lipstick on my teeth. I’m a freak of nature and that’s how I was intended to be, it’s this comedic clown thing! 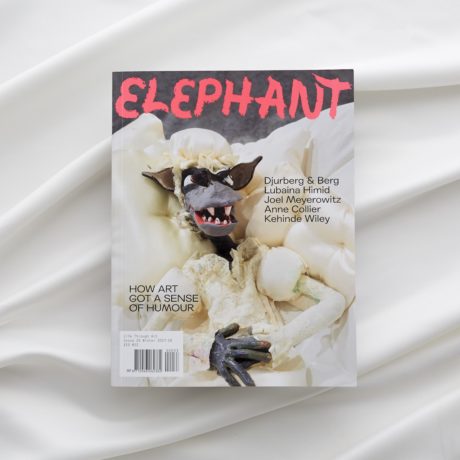