There is a beautiful simplicity in considering the flimsy, scuffed, greasy handprinted-partition separating cab driver and passenger as analogous to the lens of a camera. It takes a combination of a deft imagination, artistic impulse and an empathetic, charming personality to combine the two “lenses” to such effect as in the images of Joseph Rodriguez.

The Brooklyn-born documentary photographer began his cab driving career in New York City in 1977, and the images he shot from then until a decade later have now been gathered together into a beautiful new photography book simply titled Taxi: Journey Through My Windows 1977-1987.

Rodriguez was encouraged to start taking pictures of his passengers by acclaimed photojournalist Mary Ellen Mark, who he took a workshop with at the International Center of Photography school. “I had all these pictures I was taking of the street through the window of the cab,” Rodriguez says in the book. “She said, ‘It doesn’t seem that you’re brave enough to take pictures of people in the cab. There are people right next to you. Take pictures of them.’ So that was when I started making portraits of my passengers.”

During his first few years of driving, Rodriguez also managed to get off opiate-based heroin substitute methadone and pass his two-year degree at Brooklyn Technical College. In 1985 he graduated with a Photojournalism and Documentary diploma from the International Center of Photography in New York; he went on to work for Black Star photo agency his work later appeared in publications including Esquire, The Guardian, National Geographic and The New York Times Magazine.

However, during his years of driving, Rodriguez’s day shifts were gruelling, spanning 4am until 4pm. It meant he caught the city at its most strange and furtive: the leathered-up punters being turned out of the city’s underground fetish clubs like the Hellfire, Mineshaft, The Anvil and The Vault; the hustlers; the moneyed men racing to and from the airport; the children of families on their way to church.

As Bronx-born writer Richard Price writes in his introduction to the book, in the decade between 1978 and ’87 it felt as though New York “was getting its teeth kicked in on a daily basis, encompassing as it did, the dawn and high noon of the Aids crisis, one municipal budget crisis after another leading to wage and hiring freezes, labour strings, and in general, an overall deterioration both physical and spiritual in the everyday quality of life.” He describes a metropolis blighted by street crime, cocaine turf wars, and from the mid-80s the “nihilist WMD” that devastated the city: crack.

“To drive a cab back then,” he writes, “you either had to have a death wish or come to the job with a biography that inured you to the danger or graced you with such intuitive empathy/curiosity to see and hear and sometimes engage with the cavalcade of humanity sliding in and out of your back-seat trumped the nightly game of Russian roulette.”

We see, through Rodriguez’s eyes, the cab as a sort of portal, not just from A to B, but from one sort of person to another. He often saw his customers pulling unusual moves, such as entering the cab in bondage gear, only to emerge from the vehicle clean-cut in an oxford and khakis ready to face unwitting family and friends. One woman, he recalls, drove around getting hot and heavy with her partner (or so he presumed), only to get back in an hour or so later with her boyfriend, who was apparently confused as to where she’d been “hiding” in the club earlier that night.

“In these images he’s as much a part of the scenario as his subjects. Perhaps this is why they feel so imbued with a non-judgemental sense of humanity”

The photographer’s previous work had seen him immerse himself in the lives of the gang families in East Los Angeles, and in the everyday lives of civilians caught up in the war zones of Afghanistan and Pakistan. In these images, though, he’s as much a part of the scenario as his subjects. Perhaps this is why they feel so imbued with a non-judgemental sense of humanity and genuine interest, rather than a “them-and-us” detachedness.

His subjects are the sort of people rarely seen as the “stars” that they become here, and Rodriguez paints them with a depth and emotional complexity we rarely see in the usual style of street photography. His hustlers and sex workers aren’t archetypes or flat representations of bigger issues, but individuals with feelings that veer from tiredness to sadness to defiance to playfulness and humour, all in a single snapshot.

“To drive a cab in New York City, then as now, is to become invisible… but if you’re of a certain cast of mind, rather than feel dehumanised by that dynamic, you can embrace that invisibility to continuously school yourself on the infinite varieties of human experience…” writes Price in the book’s introduction. “The overarching mission of Joseph Rodriguez’s work is to make visible those we choose not to see: the shunned, the ignored, the demonised.” 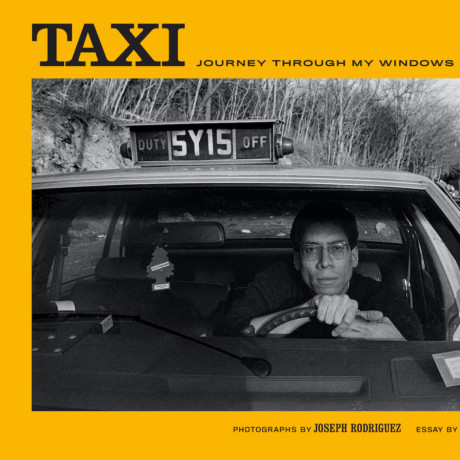