Tension is ever-present in the fashion photography of Sibylle Bergemann. The East German photographer documented the reality of life in the GDR, while capturing the output of artists and designers who tested the boundaries of censorship and carved out spaces to dream within its repressive regime. Taken in the winter, when the historic park lay under a blanket of snow, this image (Annette and Angela, Lustgarten, 1982) combines the striking beauty of its composition with the darker backdrop of the Cold War.

Hair flying behind them in the wind, skirts billowing, the dynamism of the running models appears at odds with the sparse, frozen trees above them. Their playfulness also jars with the harsh cityscape just out of shot: the partially reconstructed Berliner Dom, still bearing the scars of World War II bombing, and the sharp-edged Palast der Republik, which housed the parliament of the GDR. Bergemann’s casual shot of the pair plays out directly under the nose of the state.

“Freed from the need to photograph clothing in order to sell it, Bergemann was able to experiment”

From the late 1960s through to the fall of the Berlin Wall, Bergemann staged photoshoots for East German fashion magazines like Sibylle. Founded in 1956 by Sibylle Boden-Gerstner, the so-called ‘Vogue of the East’ distanced itself from its consumerist counterparts in the West by including sewing patterns alongside designs, rather than brand names. Freed from the need to photograph clothing in order to sell it, Bergemann was able to experiment with a range of artistic and documentary styles.

Throughout her career, Bergemann also photographed the fantastical creations of East Berlin fashion collective Allerleirauh, who attempted to evade censorship by producing avant-garde shows in abandoned chapels and bath houses across the city in the 1980s. As with fellow fashion group Chic, Charmant und Dauerhaft, the economic scarcity of the GDR only fuelled the ingenuity of these collectives: in the absence of traditional fabrics, designers made clothes out of shower curtains, hospital intestine bags, and plastics usually used to cover strawberry plants.

Bergemann’s documentation of these subversive artistic undercurrents, combined with her distinctive compositional craft, left an indelible mark on Germany photographic history. As these two women run through the snow, they evoke the small pleasures of rebellion to be found even under difficult circumstances.

Online store launching October 2021; this image by Sibylle Bergemann will be available for purchase as a poster, alongside posters, books and edition prints from all OSTKREUZ photographers 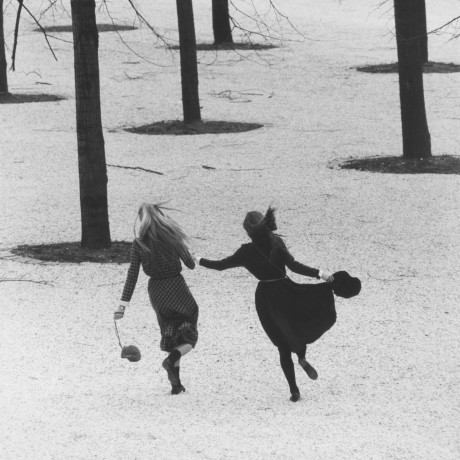