In the 1990s, British photographer Ajamu X organised and hosted private sex parties in his South London home under the moniker of the Black Perverts Network. Created in direct response to the exclusionary door policies of predominantly white gay clubs at the time (“It was basically no fats, no femmes,” he told Frieze earlier this year), the gatherings provided a safe space for Black and Asian men of all shapes and sizes to come together without fear or inhibition.

Some 30 years on, and the expectations of the queer clubbing scene remain narrowly defined by a history of uneven power dynamics. Hakeem Kazeem is a filmmaker, writer and the founder of club and performance night The Batty Mama, launched in London in 2016. The Batty Mama emerged from a series of conversations between artists Kazeem, Ama Josephine Budge, and Lasana Shabazz, who found that “many queer nights marketed to a black and brown audience were often dominated by a white audience.”

The common ground between Kazeem and Ajamu is immediately apparent, and has led the two to collaborate on short film projects together, as well as a series of portraits. Ajamu’s 2015 photograph of Kazeem (currently on display at London’s Cubitt gallery in Archival Sensoria, a solo exhibition of Ajamu’s work curated by Languid Hands) is quietly reflective, at once staged and yet serene. Kazeem appears before the lens with eyes closed, hands clasped loosely together as if in the midst of an intuitive ritual. There is an introspective calm to the portrait, and a sensation of simultaneous motion and stillness.

“Like Ajamu’s early parties, as much a form of activism as they were a celebration of pleasure, Kazeem melds the personal and the political”

Bare-chested and unadorned, Kazeem’s skin comes to the fore. Shadow and light cast the crevices and creases of this intimate terrain in sharp relief, in contrast to the smooth blankness of the sheet behind. “Through our bodies,” as Ajamu has previously stated, “we bring our archives with us.”

At The Batty Mama club nights, “the focus is to support and promote Queer People of Colour’s creative work and art,” Kazeem told i-D magazine in 2016. “It’s important that we strive to create an immersive experience, and to have Black and Brown bodies occupy queer and black spaces.” Like Ajamu’s early parties, which were as much a form of activism as they were a celebration of pleasure and kink, Kazeem melds the personal and the political.

Standing before Ajamu’s lens, eyes closed and deep in thought, together they enact the purest desire of all. Even just for the duration of the camera shutter, Kazeem takes up space. 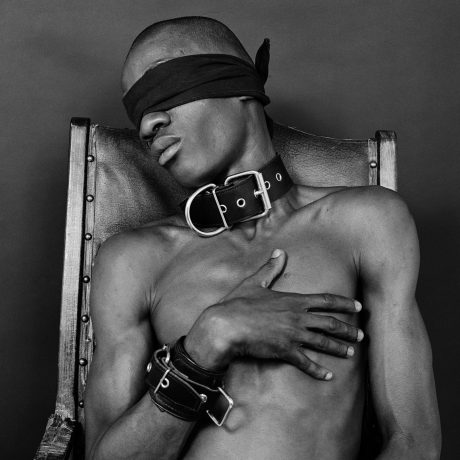