The world is in flux. As far as politics is concerned, we seem to have stepped through the looking glass. Climate change is our generation’s Armageddon and nuclear rearmament is, amazingly, in the news again. Art can offer up escapism in such times, or it can hit us in the face with the big issues; historically, it has done both. But artists can also proffer strategies for navigating through the chaotic and unexpected—as they are at this year’s Artissima fair in Turin.

Chilean artist Alfredo Jaar’s neon work Be Afraid of the Enormity of the Possible (2015) could be a motto for our times. These words are taken from Romanian philosopher Emil Cioran and force us to confront the fact that anything, and everything, can go wrong. So far, so pessimistic. But while this particular piece is not exactly comforting, taken as a whole, Jaar’s oeuvre is about perseverance and standing up to the big issues. He has also captured in lights that immortal line from Samuel Beckett’s Waiting for Godot: “I can’t go on, I’ll go on.” In the end, Jaar is telling us to keep going in the face of overwhelming possibilities.

When the Stardust Hotel opened its doors on the Las Vegas Strip in 1958 the Cold War was at its height, and just 65 miles north of the city, the American government started testing nuclear weapons. All in all 1,032 atomic bombs were detonated in the Nevada desert between 1951 and 1992. You might think all this radioactive activity was a concern for the gamblers and pleasure seekers of Sin City. Not so. As Francesco Jondice’s images remind us, America’s capacity for commercialization knows no bounds. The Stardust Hotel, along with many others, opened its rooftop and hosted atomic-themed parties, so that guests could watch the explosions while sipping on their martinis. These unlikely sideshows even had a mascot, Miss Atomic Bomb, who dressed up as a mushroom cloud. Only in Las Vegas could nuclear testing be turned into a kitsch money-spinner.

Keep your eye on the skyline

The financial crash happened a decade ago and we are still talking about austerity, so, as far as financial security goes, it pays to say ahead of the curve. Artist Jonas Staal is founder of the artistic and political organization New World Summit. He has been working on a long-project called Monument to Capital, realized in 2013 as a video and lightbox installation. It takes as its starting point the Barclays Skyscraper Index, a report which argues that there is a direct link between the construction of the world’s tallest buildings and economic meltdown. According to research, there is a direct correlation between the next record-breaking tower and an impending financial crisis. It seems that there is a global drive to “monumentalize capital at the very moment it disappears”. With this in mind, it pays to watch the horizon.

You are not alone

If you are feeling overwhelmed by what you hear on the news, know that you are not alone. Birgit Jürgenssen’s 1976 work I Want Out of Here! takes the form of a self portrait of the artist dressed in a conservative lace-trimmed blouse, pressing her face against a pane of glass. It is a comment on the repressive norms and expectations imposed on women, and is as relevant now as it was in the seventies. But this one image also captures what many of us are feeling about Trump, Brexit and the resurgence of right-wing politics.

Look for the silver lining

When doomsday does land, don’t forget to appreciate the hidden beauty. Pamela Diamante’s ironically named photographical series Estetica della Apocalisse (Aesthetics of the Apocalypse) charts how art imitates nature, or, more precisely, natural disasters. She teams photographs from the sites of landslides, floods and earthquakes with their artistic equivalents. One such pairing asks us to compare the image of a man sticking his head into Doris Salcedo’s 2007 Shibboleth, that infamous 167 metre fissure installed on the floor of the Tate Modern, with a very similar photo of a man doing the same with an crack that has opened on a Californian road after an earthquake in 2014. It seems that people can’t resist the urge to investigate what lies beneath. There are eleven more examples of life and art converging in this way, including images of works by artists such as Olafur Eliasson and Miguel Chevalier. So when Armageddon does hit, don’t forget to pop your head out of your nuclear bunker for a moment and appreciate the artistry of it all.

Until 4 November at Oval, Turin 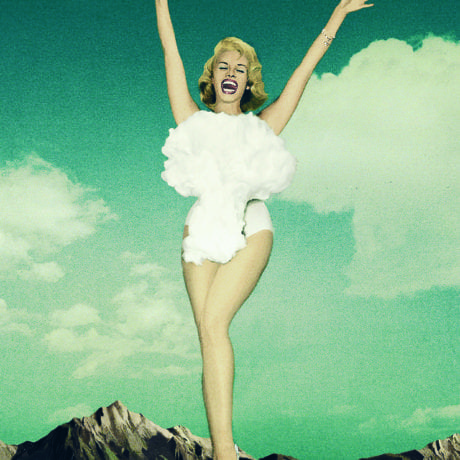