“My journey began when I was eleven and was made aware that I was black, different and an artist who didn’t know how to voice my annoyance with the notion that I didn’t fit in” says Deborah Roberts. The Texan artist is in London for her first solo exhibition in Europe, at Stephen Friedman gallery, titled If They Come. “My practice changed many times, trying to provide an aesthetic in which the work could demonstrate its discontent with my current political status. I had a lot of ups and downs and I’m glad I finally found a method and a voice to make a difference.”

That method draws on techniques devised by Romare Bearden, the influential American artist who used manual cut-and-paste compositions with cloth, paper and paint—and who was himself inspired by Mexican Muralism—to explore his life experiences in New York at a time of shifting politics and perceptions.

Roberts relates equally to the revolutionary Dadaist Hannah Hoch, whose fragmentary aesthetic was a way of literally deconstructing and rebuilding a place for women in the Weimar Republic. This relationship between aesthetics and politics is dovetailed in Roberts’s own works: composite forms that are roughly but deliberately assembled to construct new figures.

“The need to push for change or acceptance inspires me”

“As a practicing artist I realized early on that I was not interested in works that did not speak to the human condition, especially those that affected African-American women.” Roberts explains. “So, my practice and scholarship grew beyond the borders of the United States to look at the work of women artists from around the world who felt the necessity to challenge the status quo, which prompted a change that still motivates me today. Whether the works deal with politics, race, gender or class, the need to push for change or acceptance inspires me.”

Her figures speak in particular to women and men as they come of age, a period that is often particularly fraught and dangerous. Ava DuVerney’s Netflix series, When They See Us, offers a retelling of the 1989 case of five black youths who were wrongly convicted for twelve years for the rape of a jogger in Central Park. It was one of the most publicized cases of the decade. In Roberts’s exhibition, a work depicting a group of black teens echoes this feeling. All hands and eyes, gestures and motion, it considers the question of being seen, and by whom; it is titled When You See Me.

“My primary focus has been on the adolescent black girl and the interpretations, descriptions and judgments that are used to define her as she moves into womanhood. These interpretations will follow her throughout her life as a black woman, as it did her mother.” Roberts reflects. She sees the struggle against racism as cross-generational. Now in her late fifties, Roberts clearly feels a sense of responsibility towards the next generation. As someone who creates images, she is engaged with how black boys have been represented. Works in the exhibition such as After Stephen, Ulysses and Give It a Try analyse the way damaging stereotypes created by the media are internalized by youths.

Roberts describes the public and prolific dissemination of negative images as a form of “social terror that has instilled fear and self-loathing in black people over generations. My hope is that my work defeats these past narratives and breaks the notion that they are inferior.”

Roberts’s exhibition underlines the power of the gaze and the nuanced ways of being seen in the public space. It’s no different in the UK, Roberts believes, to what she has observed in the US. “Most like to think that because there are so many examples of terror heaped on black bodies in the United States that our culture is less civilized, but one should look at the negative attention that Meghan Markle received after it was announced that she was to be Prince Harry’s bride. My exhibition highlights that we must gradually replace the traditional idea of beauty with a global beauty that embraces us all.”

The bodies Roberts constructs are deliberately unbalanced, unstable, a sum of assembled parts—the self-construction is evident, and it carries a powerful message. “Being a black woman artist with the world’s attention in 2019 gives us a certain freedom that we haven’t had in the past to dispel gender stereotypes and archetypes, and introduce and re-introduce different types of beauty over multiple visual disciplines.”

Deborah Roberts, If They Come 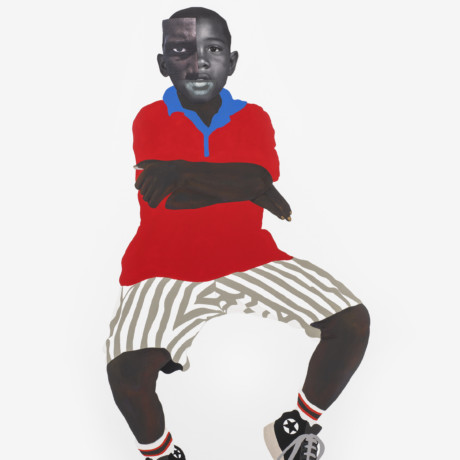