In 1998, Portugal had a referendum on abortion. Voter turnout was poor, and abortion was illegal in the country until 2007. Artist Paula Rego was living in London at the time, but she knew how common practice back-alley abortions were in her home country—she had even been asked by women she knew in a Portuguese fishing village for money to facilitate them. Rego, a mother of three, had also had abortions herself, while studying at the Slade School of Fine Art in London. Rego responded to the Portuguese abortion ban in 1998 and 1999 with a series of explicit but clinical drawings of women having abortions. She bought school uniforms in John Lewis and made her subjects provocatively young to remind the viewer of who abortion bans affect most: young women, women who are poor and women from ethnic minorities—women who cannot access or afford to pay for abortions and who often end up resorting to dangerous illegal practices, or try to do it themselves at home.

Works from Rego’s Abortion series are currently showing as part of the artist’s retrospective at MK Gallery, Milton Keynes. As it opened, my newsfeed was flooded with photos from the US; pictures of governors signing bills to bring abortion bans into widespread affect were circulated with #stopthebans campaign mechanisms. This happened in line with discussions around the “global gag rule”—which has been routinely revoked by every Democratic President and reinstated by every Republican President since President Ronald Reagan introduced it in 1984. The controversial ban blocks US funds to any global, non-governmental organization that provides any form of information or referral about or for abortion when the pregnancy has not stemmed from rape or incest, and when there is no immediate threat to the woman’s life. While there is an official line that this will not affect countries who have access to safe and legal abortion as a constitutional right (such as South Africa), it is strongly believed that most clinics err on the side of caution and apply blanket bans. Unsafe abortions lead to seven million women being hospitalized and 70,000 women dying around the world, every year.

Within Rego’s exhibition there is a painted triptych of three different women, older than the girls in the series of etchings and drawn with pastels. Crouched, curled up, legs open, their discomfort is obvious, but they are deliberately bloodless depictions—Rego felt that showing blood would distract attention from the cause. Rego’s Abortion series was used in Portuguese newspapers to support the next referendum campaign for liberalizing abortion laws, almost a decade later. She referred to them as propaganda. Rego has said that these are the paintings she is most proud of.

Tony Gum recently spoke publicly of the work she made in the aftermath of an abortion, the crimson red double self-portrait, Sweet Saboteur. The artist told the Guardian that women are unprepared for how “grueling an abortion can be”. The lack of representation of both the physical and psychological aspects of abortion only compounds many women’s sense of shame and guilt. Gum made the portrait as part of a process of dealing with the “psychological fallout” she experienced, divided between helpless and hopeful.

Tracey Emin has made a lifetime of work about the two abortions she had, aged eighteen and twenty-six—the names Foetus I and Foetus II are embroidered inside her pioneering tent, Everyone I Have Ever Slept With, a work that was ridiculed at the time it was created in 1998. Where Rego’s abortion works were foremostly political, Emin’s are personal; the British artist has spoken of the direct works on abortion as being neither pro-life or pro-choice—it is simply something that happened to her, that has altered the course of her life. She has never stopped thinking about it; making art about it has helped her to heal, and it has helped many other women to confront their own pain and heal collectively. Out of sight, in our times, often means out of mind. By bringing abortion into the public space and into public forums, we can no longer avoid the realities of what an increasing number of women face. 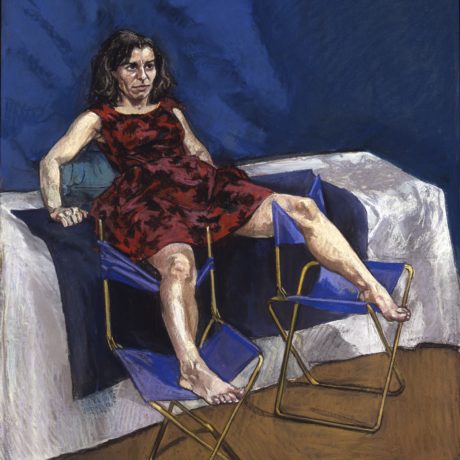