My first encounter with Ayana V. Jackson’s work was the artist’s 2013 Poverty Pornography series. Inspired by Geoff Dyer’s rumination on the history of photography in The Ongoing Moment, Jackson interrogated the way black bodies in the global south had been represented by the camera, creating a stereotype image—bodies ravaged and ruined by sickness, subjected to suffering, economic, physical and psychological. From colonial period missionaries and periodicals to images used by National Geographic or western charitable organisations, the colonial lens has assumed a dominant gaze on black bodies, pitying and distant. “It is my view that we are still suffering from that ‘framing’ of the earth and its inhabitants.”

Over the last decade, Jackson’s work has been defined to some extent by a recurrent interest in the role of photography since its first uses; the ways in which cameras have been used in the Global South to dominate and disseminate particular ideas. “My previous works acknowledge that the invention of the camera and the discipline of photography happens at the same time as the colonial experiment. Its use becomes more widespread as Europe began to dig its claws deeper into the non-West. Where word of mouth, text and drawings were more common forms of relaying who and what was seen and experienced, photography brought the remote closer and the lore more real.” She tells me. “However it is important to consider the position of the photographer, the era, notions around race, ideas of civilization, the hunger to ‘capture’ something they’d heard about. Not to mention the interests of the financiers of the photographers and/or editors of the presses that published those early photographs.”

“It is important to consider the position of the photographer, the era, notions around race, ideas of civilization, the hunger to ‘capture’ something”

Jackson developed this dialogue with nineteenth and early twentieth-century photography in series such as Archival Impulse, Dear Sarah, to Kill, Allow to Live—and most recently her startling portrait series Intimate justice. As a photographer, she was intrigued by the air of objectivity the camera was able to convey. “There was no first-person perspective, no dialogue, just a one-way stream of images being created under very problematic geopolitical circumstances.” Jackson has been her own model since 2009, in part to address the position of photographer and subject simultaneously. “Through the use of my body, I have at times mirrored the problematic imagery as an effort to ask my audience to reconsider what they are (or were) looking at and examine their own relationship to the work.”

Installed on the walls of Marianne Ibrahim’s Chicago gallery are twelve works by Jackson, in a solo exhibition titled Take Me To The Water—a precursor to her major exhibition at the Smithsonian National Museum of African Art, due to open in October next year. Take Me To The Water is an “old Negro Spiritual—I am unsure of its exact origin, but I am most familiar with it as a song that was sung in the ‘Black Church’.” Jackson recalls. “I remember it distinctly because it would be sung, hummed, then sung again for as long as it would take for a communal baptism to take place. I am officially christened Catholic, however, I spent a lot of time in the AME and Baptist churches of my paternal grandmother and grandfather.”

The trembling voices of elderly church ladies come to mind when Jackson listens to Nina Simone’s rendition of the song. “I often say that the subconscious is a beast. I know this is true because I chose the title without the song in mind. Now that I am reminded that it was a constant refrain during my childhood, I know it is the only reason the title occurred to me.” Dance, music and movement also relate to Jackson’s childhood; trained as a competitive gymnast, she learned controlled movement—something that she now employs intuitively in her photographs.

The works are unmistakably Jackson’s, exploring the condition of the black body—her practice aligns with that of Lubaina Himid and John Akomfrah, who have examined the history of transatlantic slave trade from the British side of the water, through costume, performance and theatre. She brings ten semi-fictional characters back to life from the water, restoring histories where they have been erased. In her new work, Jackson collaborated for the first time with the fashion designers, Rama Diaw and Mwambi Wasaki to create original costumes, which she had previously sourced from costumiers and opera houses in Paris and South Africa. The costumes add dimension and new nuances to the characters, who live at the bottom of the ocean.

“Through the use of my body, I have at times mirrored the problematic imagery as an effort to ask my audience to reconsider what they are looking at”

Some of them relate to the Water Spirits, “both historically and presently revered by communities within countries impacted by the transatlantic Slave trade (Nigeria, Senegal, Angola). By no means does this series present or reference an exhausted list, however. The work references certain key figures that also have found their way into African Diasporic belief systems in places like Brazil, Cuba, Haiti and the United States.” Other pictures refer to the studio photographs that her Great Grandparents commissioned as personal keepsakes and memories, as well as the myth of Drexciya, a techno band from Detroit formed by Gerald Donald and the late James Stinson. “Their founding myth was that they are the surviving descendants of the pregnant women who were hauled overboard the slave ships. While the treatment of pregnant woman as sick cargo is a brutal fact of the triangular trade, the idea of an aquatopia populated by aquahumanoids is obviously rooted in fantasy.”

“In my imagination, these spirits that pre-existed the middle passage were present in the waters when the pregnant mothers were drowned. They somehow took physical form and helped birth the babies underwater where there was a seamless transition from the amniotic fluid to the seawater. The complementary set of characters presented would be the descendants of those babies: The Drexconians.”

For Jackson, ocean waters are seen as an ambivalent and sacred force. “The human community has to respect its presence and its power. From the most ancient civilizations through to those yet to be born, there is a certain wisdom in honouring the importance of water. Its use in ritual is common throughout all of humanity. That said, there is most certainly another layer, another nuance related to the history of Black America and the troubled waters that delivered us to these shores. This series is certainly set in those waters.”

Take Me To The Water also connects to Jackson’s earlier works, in that she continues to stage her own, female body in the images. “My work centres itself around ‘othered’ bodies. Its first point of entry would be the Black American woman’s body because that is my own subjectivity. However, as I work through the ways photography has played host to so much propaganda, I cannot help but acknowledge that the woman’s body—regardless of regional, ethnic or cultural specificity—has been manipulated and misrepresented in much the same way,” she explains.

“What a woman’s body is capable of: how it should perform; who gets to see it or posses it; the ways in which political systems have systematically oppressed it. The manner in which photography (particularly through twentieth-century advertising and editorial content) has been used to illustrate its lack, inferiority, weakness… There are many overlaps between gendered and racialized bodies, particularly when one sits on the side of the disadvantaged.” Her position means that her work “sits at the crossroads of race and gender. It is a thesis rooted in intersectional discourse.”

“From the most ancient civilizations through to those yet to be born, there is a certain wisdom in honouring the importance of water”

Though Jackson’s works are steeped in history and intervene in the archive, this doesn’t mean that they do not relate to the present moment. The colonial gaze is as diffuse—if more insidious and corporate—as in the nineteenth century. How does she feel about this, as someone involved in photography?

“Perhaps I am a bit jaded, but I think the compulsion to use imagery as propaganda will always be there. Invariably there will be those who use their power over, access to, and distribution of content to manipulate others. Thankfully we have reached an era where self-driven content is easier to create and distribute”—Jackson remarks. However, she adds, that despite the democratisation of photography, “I hope this only expands our capacity to speak about ourselves for ourselves, but even that has potential drawbacks. Too much noise sometimes means you look for, or only pay attention to, the loudest clearest voice, and then we circle back to where we started.”

“Unless we don’t. Who knows? Either way, I am confident there has been movement. More criticality. The fact that my work sees the light of day is a testimony to that. So I’m optimistic. At the end of the day, I’m team humanity.”

Ayana V. Jackson, Take Me To The Water

At Marianne Ibrahim, Chicago, until 26 October 2019 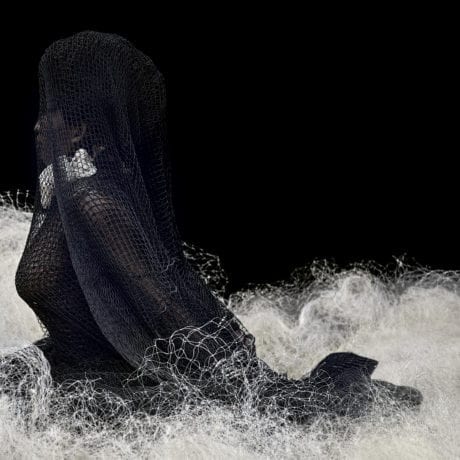