Out today on Artsy is Suchandrika Chakrabarti on Masaccio’s Expulsion from the Garden of Eden.

If you drive out of Caracas and towards the east coast, you have no choice but to go past Petare. The view, as you inch closer to the city limits, is vivid and colourful. The Caracas barrio (you might know it as “favela”) is a pick ‘n’ mix of tones, shades and tints. The small square houses, built on the contours of the mountains, could be a deep terracotta brick, a worn-in white with streaks of water damage, or maybe even a pale pink that glimmers in the Caribbean sun. Each house is unique, its own mountain, standing out in the sea of pixels. Petare looks like a vast, beautiful oil painting, one that often shakes a visceral reaction out of people, if only for its sheer magnitude. It’s also one of the most deprived neighbourhoods in the world.

I don’t remember the first time I visited Petare. I was likely a child, too young to understand where I was. I do, however, remember the last time: it was 2009, I was seventeen years old, and I was preparing to leave the country I call home. At that point, Venezuela seemed to have reached the peak of socio-political collapse (somehow, I didn’t think it could get worse) and life was becoming increasingly difficult.

During that time, my dad was part of a softball team that would practice and play in Petare and El 23 de Enero, two of the most dangerous barrios in the capital. One Saturday before a match, my dad decided to take me to el Museo de Arte Popular de Petare on a whim. “Did you know that there was an art museum here?” he asked me, his eyes widening as he waited for my response. No, I told him, I didn’t know there were art galleries in Petare. He grabbed my hand and pulled me towards the small white building, giddy in his quest to prove something to me.

“Petare looks like a vast, beautiful oil painting. It’s also one of the most deprived neighbourhoods in the world”

Inside I came across a painting called Barrio Caruto by an artist called Bárbaro Rivas. The painting, named after an area in Petare, was a quintessential snapshot of the barrio. A man and a woman watch a cluster of goats as they tread down the sage sloped road, while four small, earth-coloured houses and a palm tree stand in the distance. The image, with its textured strokes, was instantly comforting, and somehow also mystical. It felt like a version of home that was always there, yet often hidden by others.

That day I learned Bárbaro Rivas was an illiterate child who never knew either of his parents. Born in Petare in 1893, he grew up extremely poor, taught himself to paint and devoted his life to his faith in art, and God. His paintings often centre on questions  of class, socio-political unrest and the divine.

Some works are more explicit than others; in one painting, he illustrates protestors holding up picket signs that translate to “enough lies” with the backdrop of the Ávila, the mountain range that cradles Caracas like a knowing elder. In another, he paints a simple portrait of a local woman he knew, filled with tenderness. One common thread ran through them all: his love of Petare. His belief in God, but also his belief in the barrio. His belief in Venezuela, and in a different vision for our country.

At seventeen, my life in Venezuela was as good as it could be. My mother, a Maracaibo-born radiographer, grew up in the middle class neighbourhood of Altamira—a metropolitan area known for its air-conditioned office buildings, European-style bakeries and fashion ateliers. My dad was born and raised in Los Mecedores, a barrio on the west side of the city, where gunshot sounds were so commonplace, they’d ring out in the night like haunted lullabies. I lived in Los Naranjos, an area further away from the bustle of the city centre, a quiet haven on the slope of a mountain where people had tiled patios and didn’t immediately fear for their lives—at least not like they did in Los Mecedores.

I noticed how people in my neighbourhood would react when I told them what part of town my dad was from, and their shock if I mentioned that I went to Petare a few times a month to watch my dad and his team play softball. “What?” they would gasp. “Do you know what that place is?” I recall the looks of disapproval from my more affluent classmates when my grandfather would pick me and my brother up from school in his battered taxi. I especially remember the time a family friend congratulated my dad, in front of me, my mom and my brother, for marrying a middle class woman and “bettering his bloodline”—forgetting that we were part of his bloodline, too.

“Although a place of intense hardship, the barrio is also a beacon of solidarity, affection, laughter and true friendship”

Bárbaro Rivas, like my dad, taught me the true joy of the barrio. Although a place of intense hardship, it’s also a beacon of solidarity, affection, laughter and true friendship. It’s a place where people, despite having nothing, will invite you in for a hot meal. A place where art is not only truthful, humble and mighty, but possesses a fighting spirit that can stand up to the classism that afflicts Venezuelan society. A special place where you can find pockets of beauty and resilience in the most unexpected places, like a softball field made of dirt, or a simple painting of a man and woman leading goats down the mountain in Barrio Caruto.

As I write this, a picture floats to the surface of my mind. It’s an aerial shot of Caracas, the Ávila sitting in the background above thousands of homes packed into the frame; the Francisco Fajardo highway runs through the middle of the image, separating the two sides. Zoom in and you will notice that the left side is full of spacious high-rise apartment buildings, courtyards and abundant greenery. The right side, where Petare is, resembles a pointillist painting, seemingly a million small homes crammed into the same surface area on the incline of a mountain. Two halves of Caracas in one image: one society physically divided by class.

I am reminded of just how important Bárbaro Rivas’ work is; he created a language that could be understood by everyone. And crucially, he gave me the tools to understand my own complicated identity—as a Venezuelan, and as the proud daughter of a man from Los Mecedores.

Head to Artsy to read their latest story in the series, a piece on Masaccio’s Expulsion from the Garden of Eden 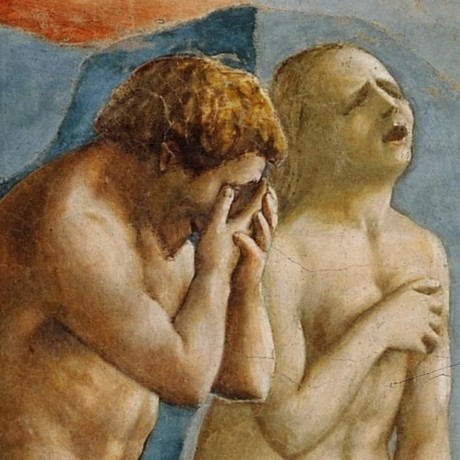