The MAAT (Museum of Art, Architecture and Technology), designed by the British architecture studio Amanda Levete, celebrated its first anniversary in October. Since its inception it has brought important artists and site-specific experiences to Lisbon, conceived not only for the two buildings that constitute the museum, but also for the oval gallery: an iconic space which gives the artist absolute freedom to occupy it with an experimental stance concatenated between the work and the viewer. The American composer and artist Bill Fontana is the fourth person invited to create a site-specific work for this gallery, which was inaugurated by French artist Dominique González Foerster with the installation Pynchon Park in 2016. She was followed by Mexican artist Héctor Zamora with Ordem e Progresso and Cuban artist Carlos Garaicoa with Yo Nunca He Sido Surrealista Hasta El Día De Hoy.

In Shadow Soundings Fontana presents seven large-format canvases displaying images transmitted live from the Ponte 25 de Abril, Lisbon’s landmark suspension bridge. Simultaneously, sixteen speakers dive into the depths of the Tagus river. We close our eyes, we feel the bridge, its noise, its musicality and whispers. We lay down on the sofas scattered behind the canvases and admire its magnificence, the architectural traits and constant vibration. Based on the sounds, we interpret a variable spatial composition that fills the whole gallery with an immersive and sensorial environment. Between reality and imagination, we start the journey through this Gesamtkunstwerk. One feels the brain massage instigated by these noises now formatted as an experimental music performance.

Bill Fontana started his career with composer John Cage and is regarded as a pioneer of sound-allied artistic experiences. He has created site-specific installations all over the world, across a fifty-year span. This sculpture-like method of using sound formed the basis for MAAT director Pedro Gadanho’s curatorial concept. He met the artist when he was still working at MoMA (The Museum of Modern Art, New York) and in March 2016 Fontana visited Lisbon, where he saw the bridge for the first time. He promptly forecasted a project for the oval gallery that he describes as “an opportunity to mishmash moving images with the sounds and external vibrations of the bridge and the Tagus river”. It is an alternative idea to his 2012 piece Acoustical Visions of the Golden Gate Bridge in San Francisco, the American twin of Ponte 25 de Abril. Gadanho asked him to go back to “the composition, to the idea where the sound isn’t merely captured, it’s also transformed into a composition capable of mixing the sounds coming from the river, with those from the steel and the cars running on the bridge’s metal deck.”

In his first bridge incursion, Fontana visited every corner, watching the shadows and the beauty of their movement. He surrendered himself to the sounds and images that could be extracted, conducting a thorough inspection by recording tests with microphones and vibration sensors strategically installed in various positions. “Above all, I wanted to understand the bridge as a living musical instrument and create a work of art based on that premise. It crosses the river, it lives in the water, and so it was vital to combine its sounds with the Tagus’s elements. Part of what can be heard is its subaquatic voice.” The installation depicts several months of work, which included major, in-depth research and days devoted to walking throughout the space, thus transforming the bridge into the artist’s studio. “I spent a lot of days going up and down the bridge creating hundreds of recordings, whose consequence is this experience.”

To conceive Shadow Soundings Fontana was offered absolute freedom and, taking into account that he had already developed several bridge-related projects, he felt acquainted with their sonorous behaviour and infrastructure. Nevertheless, the Ponte 25 de Abril surprised him due to its sonic complexity, specifically because one of the car lanes is a made of metal. “The bridge ends up emitting a constant sound, due to this metallic surface, and this noise is like a voice that can be heard in every spot of the city that surrounds it. The Golden Gate Bridge doesn’t have that trait”. In addition to the bridge and river sounds, Fontana utilises some previous recordings to form these audio experiences, and so the installation “becomes a combination of the bridge’s live sounds with some mixes that I conducted in my own studio, to explore musical possibilities, with the bridge then becoming a sound sculpture. The physical scale of the oval gallery also represented an opportunity to expand my limits and explore the relationship between sounds and moving images, hence creating this immersive environment which can be experienced in this space.”

Until 12 February at MAAT, Lisbon 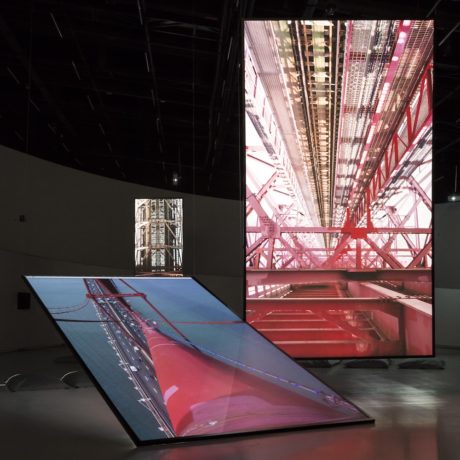