Out today on Artsy is Alex Temblador on Frida Kahlo’s My Grandparents, My Parents, and I (Family Tree)

There’s a teenage girl who has been floating around my head since 2006, which would make her not a teenager anymore. I first saw her when I was 14, at a Victoria & Albert Museum photo exhibition themed around twilight, the ‘magic hour’. I took the train with my Dad down to London for the show, from an Essex coastal hometown where the evening light did hold a kind of a power, something beautiful and electric on certain nights. But I only think this in retrospect—at the time, my eyes were drawn to visual representations of other bored teenagers in bleak places, in faraway but parallel realities. I collected these alternative adolescences, arranging them into messily organised computer folders, including the girl from the exhibition. She’s still there, actually: in a hard drive folder labelled ‘sound & vision’, in between a portrait of musician Patrick Wolf and a very early Harley Weir photograph. Filename: “29115-large.jpg”. Forever floating.

There is a potential energy inherent to the teenage girls of Bill Henson’s photography, as with all actual girls. Known for his landscape photography and portraits taken at dawn and dusk, Henson’s photographs taken in Melbourne between the 80s and the early 2000s (sometimes called the ‘suburbs series’) are inhabited by adolescent boys and girls who exist in a shadowy realm somewhere between nature and the city, day and night, and the banal and magical. Having called the idea of suburbia a “dreamscape”—and his photographic mission as a journey towards capturing something of that—it’s no wonder Henson’s photographs are occupied with young girls, themselves inherently the occupants of yearning, of dreamscapes of their own making.

A teenager myself at the time, I recognised something of myself in these twilit youths. And though many of the photographs feature boys and girls in an ambiguous entanglement, the particular work I encountered back then features a girl alone, floating above a city skyline. She is exposed and grubby, twisted slightly toward the camera, but beautiful like an angel (I can’t help but think of two lines from Taxi Driver, here: “She appeared like an angel, out of this filthy mess” / “I’m God’s lonely man.”). Floating neither here nor there, the large-format prints of Henson’s work felt ominous, as if they portended how life would throw me around in years to come.

“I collected these alternative adolescences, arranging them into messily organised computer folders, including the girl from the exhibition”

I didn’t realise it in so many words at the time, but this was the first time I saw a work in a museum that felt like it spoke directly to the condition of being young and a girl. Henson captures something of girlhood’s doubleness: how you are both spotlit (central to the drive of popular culture), and in the shadows (not taken seriously). But also, rather than merely ascribing weakness to girls—their vulnerability, as some have interpreted the bruisedness of Henson’s lighting of bodies—Henson’s depiction is a testament to their hidden powers. Flying in the sky above it all, she bears witness to the inherent power I also felt I possessed as a teenage girl; so powerful, I could break my boundaries in the flash of a bulb.

For Henson, speaking to Time magazine in 2013, his idea has always been to lend timelessness to an adolescent state that is, by definition, circumscribed by time: “When you’re photographing a kid and they turn their head, you almost want it to feel like the great pyramids. You’re looking for an intensely intimate, breezing, proximate presence but, at the same time, something that is millennially distant.”

But for me, the girl was also of her time—a close relative of a certain aesthetic moment of the mid-aughts, one reflected in my ancient hard drives with all those photographs trawled from Blogspot and Tumblr pages. A moment in time when teenagers of the North American and Australian suburbs loomed large, imagery that spoke to me as a girl in a town surrounded by bleak countryside on one side, and a vast ocean on the other. It was a moment that contained Donnie Darko, a skeleton with a hoodie riding his bike through 1989 suburbia to the strains of Echo and the Bunnymen; music videos by synth artists like M83, like the ghost girl in “Don’t Save Us From the Flames”, who would float into the sky over and over again on the MTV2 channel.

Closer to home, there was the first season of Skins, whose original trailer so entranced us, with its house party where the cast have the same grubbiness and peculiar grace of Bill Henson’s girls (especially, of course, the otherworldly Cassie). I also think of the artists roaming British folklore aurally and visually at the time: Patrick Wolf’s “Tristan”, Bat For Lashes’ “The Wizard” come to mind. Everything I loved at that time was preoccupied with a desire to expand outwards into space; with films, photographs, music and fashion that could contain sky-sized feelings. The inherent contradiction to the era? The obsession with being an outsider coexisting with a visual culture where suburban youth was central.

“Flying in the sky above it all, she bears witness to the inherent power I also felt I possessed as a teenage girl”

Though my discovery of Henson’s work intersected with this youth cultural era, his images endure more strongly than many of the other works it produced. Maybe that’s because, for me, these are photographs that still have a power to shake the viewer out of cultural assumptions of what girlhood means, and how it feels. You might draw a parallel in terms of subject matter with the work of Larry Clark, who was also the subject of a police raid in Australia for his movie Ken Park in 2003, a few years before a Henson exhibition in Sydney in 2008 drew the same reaction and controversy. But that’s where the similarities end: because, unlike Clark’s lens of observer and sometime-facilitator, Henson’s photographs hold something of the imaginative vistas of girlhood within them.

When we are presented with a teenage girl in visual culture, she is supposed to be in-between; poised to change her form; to come-of-age. Maybe that’s why this girl suspended in space felt, and still feels, so talismanic—that is, representative of teenage girls everywhere through time. To revisit that image by Bill Henson today feels like hovering above a former self.

Head to Artsy to read their latest story in the series, a piece on Frida Kahlo’s My Grandparents, My Parents, and I (Family Tree) 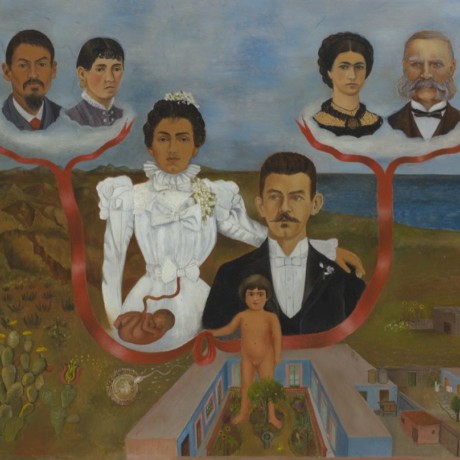