I’m a scaredy cat at heart. Recently I’ve been walking into rooms and jumping out of my skin because I failed to notice my boyfriend sitting there. Still, as nightfall envelops London and Halloween approaches, I catch myself staring out the blackened windows longingly, fantasising about a mysterious stranger climbing in and nestling dangerously into the crevice of my neck…

The vampire has been firmly rooted in the cultural imagination for centuries. In visual art there are manifestations as early as Henry Fuseli’s ghoulish figure atop an unconscious woman in The Nightmare (1781). But my fascination with the vampire truly started with the 2014 Persian language film A Girl Walks Home Alone at Night.

Director Ana Lily Amirpour’s vision portrays a woman in long, black robes and a Breton striped top who appears to float seamlessly down the street, atop her hidden skateboard. This unnamed vampire, with a penchant for music and dancing, preys solely on cruel and abusive men.

It was through Amirpour’s film that I started musing on vampires as a source of redemption. The undead and ageless, after all, have been around for centuries and borne witness to the many atrocities inflicted by the living upon each other and the world. Certainly, a vampire necessitates bloodshed of some description, it’s in their nature to seek their next meal via a vein, but what if a vampire was selective about where it sourced its food?

The vampire lovers, wryly named Adam and Eve, who appear in Jim Jarmusch’s 2013 film Only Lovers Left Alive, bypass humans altogether. Instead they opt for a direct supply of superior O-negative blood from a nearby blood bank, out of fear of contamination from the multitude of sins of the 21st century.

The pair deplore modern day life, with Adam referring to the living as ‘zombies’, viewing them as the true undead with their inability to truly appreciate the wonders of the world. While Jarmusch’s bloodsucking protagonists aren’t here to save us, they certainly dispel the idea that vampires are inherently murderous creatures.

“This unnamed vampire, with a penchant for music and dancing, preys solely on cruel and abusive men”

In my hunt for a reformed vampire, I turned to writer and curator Charlie Fox, a ghoul and goblin expert and longtime friend of creatures of the night. In 2019 Fox curated the exhibition My Head is A Haunted House at Sadie Coles HQ gallery in London. It offered a jump directly into the depths of the horror genre, right down to a Twin-Peaks-esque zigzagged floor.

Fox is ambivalent at the notion of a virtuous vampire as a source of desire. “Personally I’ve never really cared about being saved from darkness so much as trying to befriend or cuddle up to it,” he says. “Everybody seems to crave transcendence today as a way to get free from the horror of existence. Vampires are magical because they offer some other way of being in the world, beyond good and evil or life and death, which is nice to dream about… or to be haunted by.” 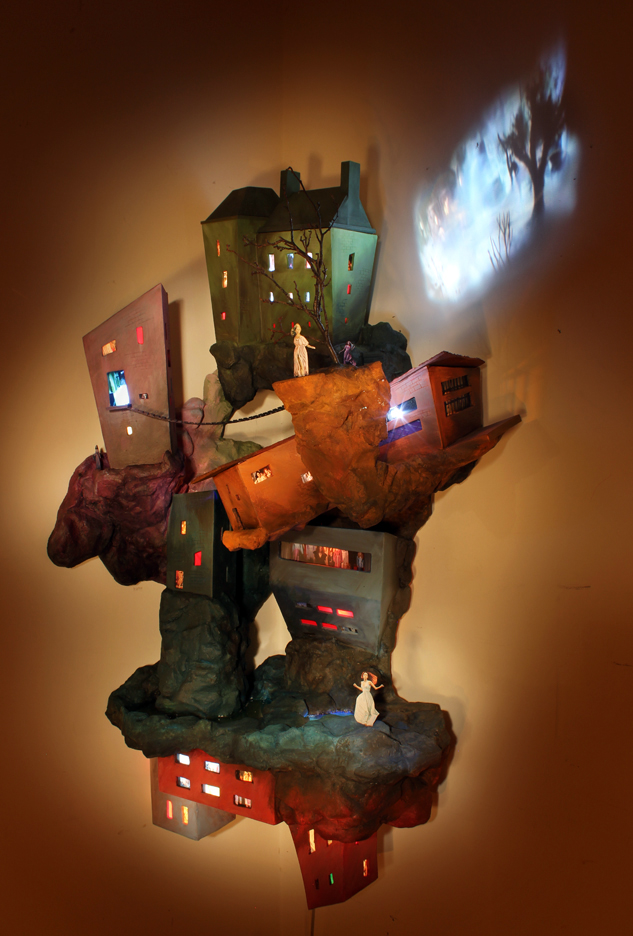 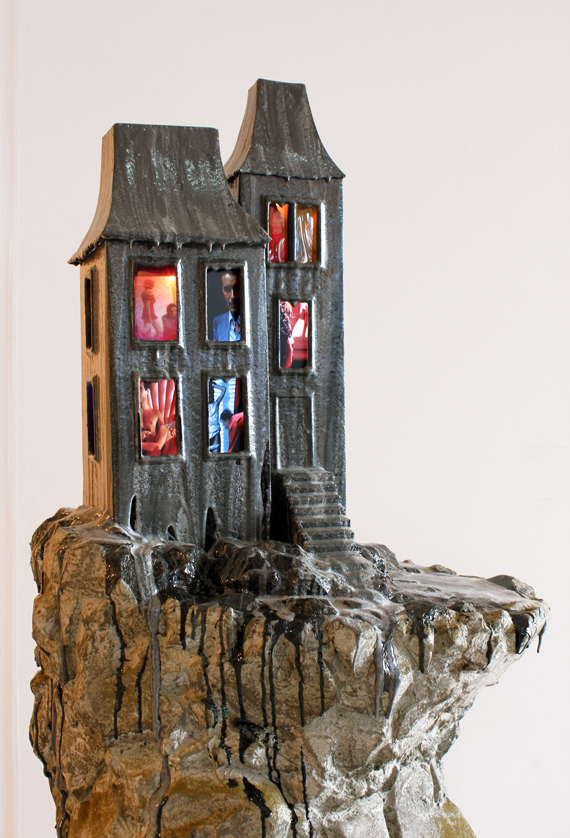 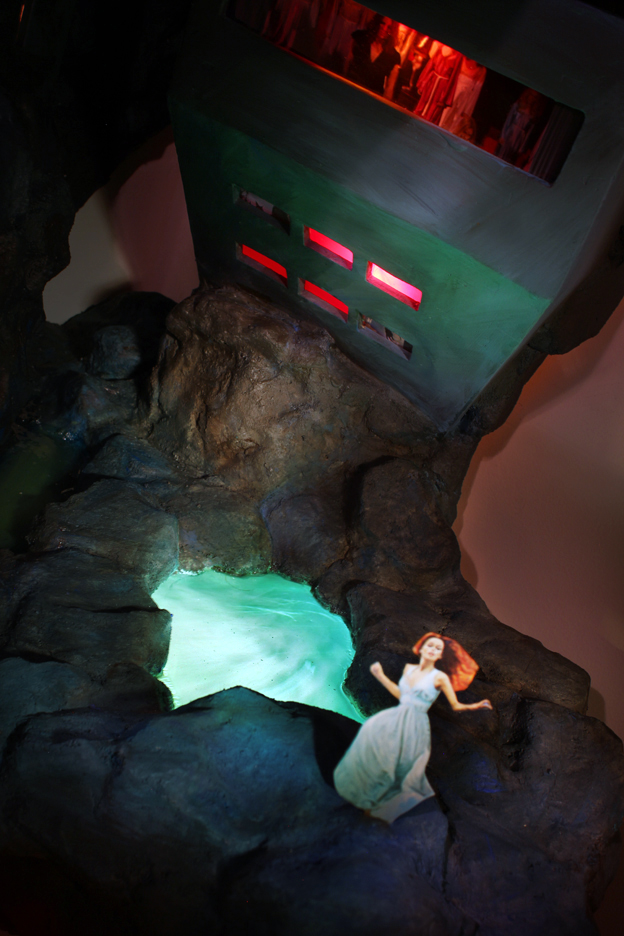 With her delicate miniatures of haunted houses, Californian artist Tracey Snelling is another who has long fallen under the vampire’s spell. Place of Shadows, Mansion of Menace (2013) borrows snippets from Phillip Glass’ 1999 score composed to accompany Tod Browing’s 1931 Dracula film, with further references to campy vampire films including Count Yorga (1970), The Vampire Lovers (1970) and Andy Warhol’s Blood for Dracula (1974).

Snelling’s works often features the kind of scenes you might find a vampire wandering around in the dead of night, but she too is less convinced by the possible redemption of vampires. “They are selfish by nature and their main goal is survival, which is usually at the expense of others’ lives,” she says. “But their charm, sexiness and allure makes them seductive, and allows them to continue their methods to survive.”

I’m beginning to lose hope of ever finding my longed-for vampire in shining armour, when I think of Lindsey Mendick. In a series of paintings at her 2020 Goldsmiths CCA show Are You Going to Destroy Me?, Mendick presented a series of portraits of her partner (the British artist Guy Oliver) as a member of the undead. In the paintings he leans towards her with his mouth open, fangs clearly visible as they embrace.

“The protagonist vampire is always lonely, always restless,” reflects Mendick. “They have seen everything and are weary of hedonism. They are so admired but alone in their soul… until you. And you were the thing they were searching for, not only in this lifetime but in many lifetimes. It was you.” 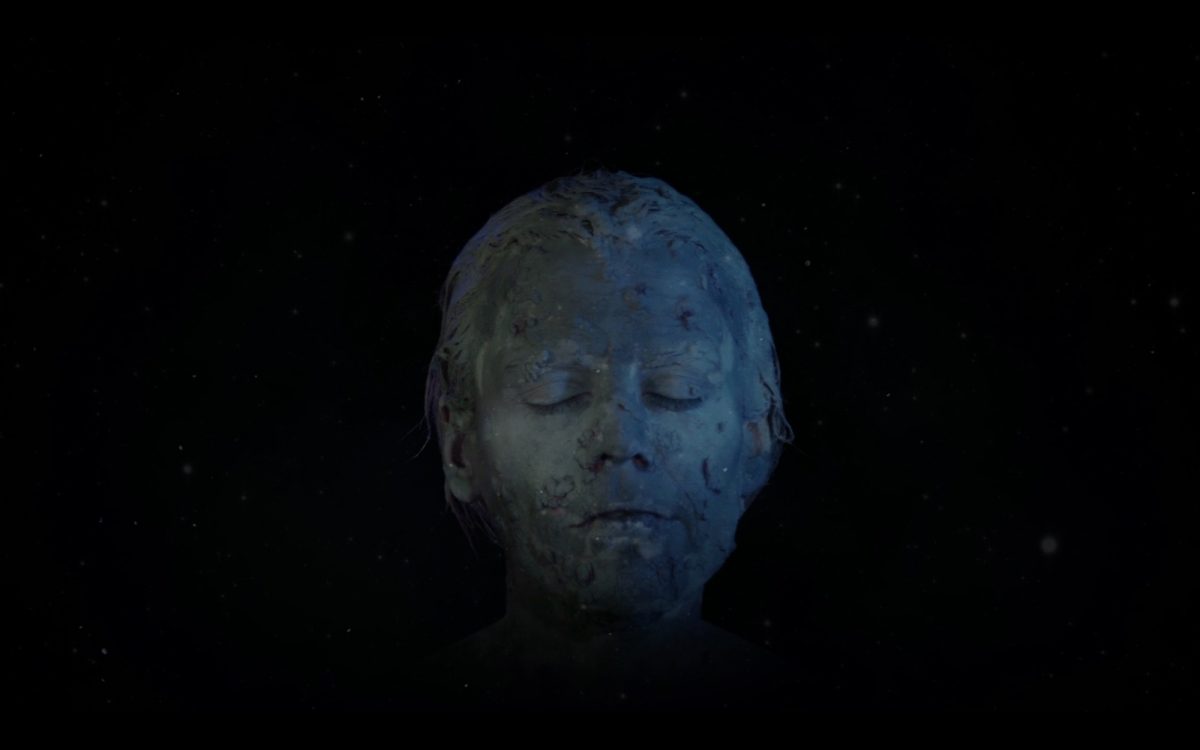 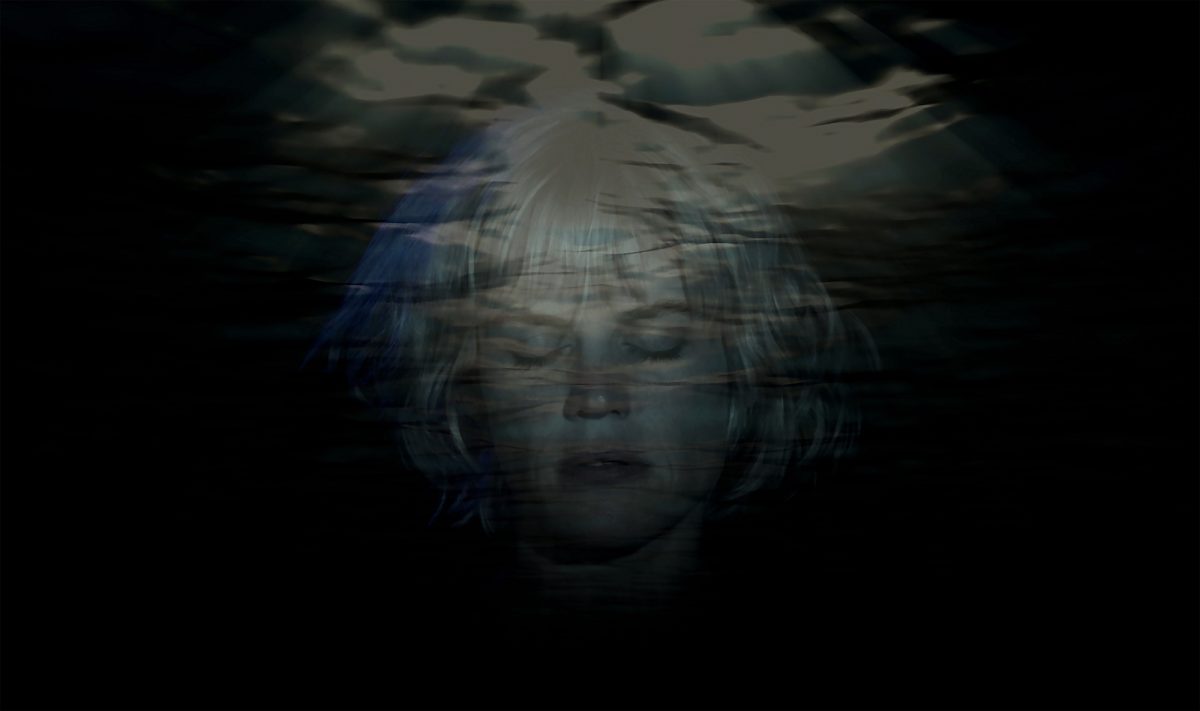 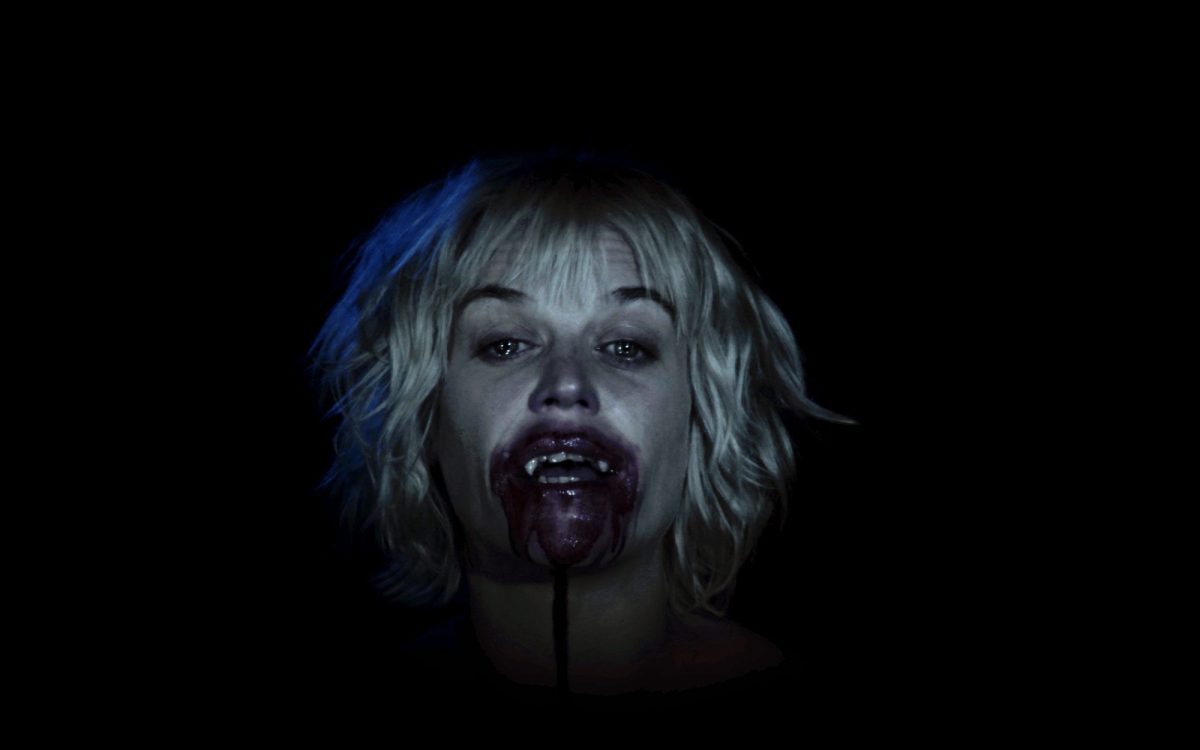 “Might the life of a vampire be a way for women to free themselves from the restrictions of the female image?”

Shani’s vampire tells us, “I had no image of myself, only touch.” It is both a chilling and invigorating thought, for what is possible for a woman who not only breaks from the image of societal expectation, but who has no image at all? Might the life of a vampire be a way for women to free themselves from the restrictions of the female image as it has been historically constructed? Might we be our own salvation?

This narrative of redemption is developed in the story of Nosferasta the Rastafarian vampire. Nosferasta is the alter-ego of Oba, a Trinidadian artist and musician based in Brooklyn. In Adam Khalil and Bayley Sweitzer’s new film of the same name (made in conjunction with Oba) currently showing at Gasworks in London, parts of Nosferasta’s origin story are relayed in a non-linear time warp spanning 500 years.

We join Nosferasta in the late 15th century. During the transatlantic slave trade Oba endures the middle passage from West Africa to the Caribbean, before meeting Christopher Columbus. Columbus is portrayed as a vampire, fetishising Blackness as a way to get closer to the indigenous people of the Caribbean. Concluding that there is no way for a vampire to become Black, he must turn a Black person into a vampire.

“The protagonist vampire is always lonely, always restless. They have seen everything and are weary of hedonism”

Oba becomes the subject of Columbus’ sinister fantasy. For the next five centuries, he stalks the earth with Columbus, spreading the colonial project through the colonisation of bodies in the form of bloodsucking. Vampirism is cleverly conflated with the destructive legacy of colonialism, the repercussions of which can still be felt today. It isn’t until the mid 20th century, when Oba encounters Rastafarianism, that he imagines an alternative life and a way to get free.

Oba is the reformed vampire incarnate, and seeks redemption by killing Columbus. His thirst for blood remains but he resists. Nosferasta is determined to redeem his past violences by participating in the decolonisation of the modern world. Knowing intimately the realities of being both targeted by and complicit in colonialism, could Oba’s rehabilitated vampire be the ultimate antihero?

As a teenager I coveted the intense love between mortal and vampire, longing for my own destructive love affair. It follows that vampires who are doing the work to dismantle the colonialist and patriarchal structures of the world would be enough to make me swoon. Then I remember my boyfriend appearing seemingly out of nowhere in the dark, with his nocturnal habits and late-night snacks. It dawns on me that I’ve been fantasising about a vampire climbing in my window, but maybe I’ve been sharing a bed with one all along.

Jamila Prowse is an independent curator, writer and editor based in London 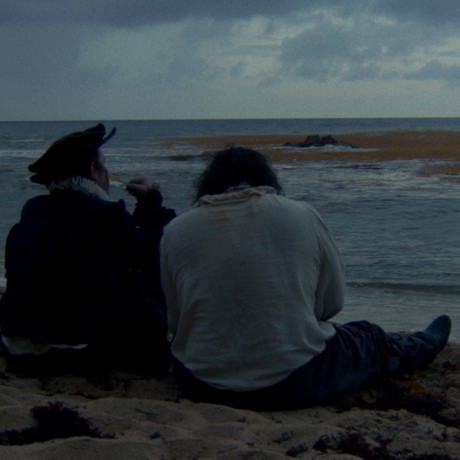