As a teenager, Shōmei Tōmatsu lay awake at night as American B-29s bombed his hometown of Nagoya, Japan. World War II, atomic devastation and the subsequent infiltration of American culture into Japan profoundly affected Tōmatsu’s outlook. Few photographers would go on to chronicle the country’s pierced psyche with such a merciless eye. “Ruins are the basic image of post-war Japan,” he once said.

Tōmatsu’s 1969 cult photobook Oh! Shinjuku plunged headlong into the underbelly of Tokyo’s bohemian district, an area that encapsulated the mythology of post-war counterculture. Wandering its backstreets at night, Tōmatsu photographed crowds pouring into department stores, drop-out youths sniffing glue outside strip clubs and butoh dancers engaging in impassioned sex. On the back cover, he predicted that such debauchery was destined for disaster: “Shinjuku is the now of the 60s and at the dawn of the 70s a violent gale is going to blow away your freedom… Oh! Shinjuku.”

Threading their way throughout the book are the violent student protests of 1968, orchestrated by the leftist organisation Zenkyōtō. Recognisable for their white construction helmets and swinging staves, students mobilised in their fight against American imperialism and the despotism of the neoliberal Japanese state.

“The unbridled energy of this inky, impressionistic shot is emblematic of Tōmatsu’s freewheeling form of counter-journalism”

Dissent reached its zenith on 21 October, when tens of thousands of anti-Vietnam War protestors clashed with riot police at Shinjuku Station. Tōmatsu observed the burning battlefield from an upstairs window, through which he caught on film a frenzied figure lobbing an object (most likely a stone) at the police. The unbridled energy of this inky, impressionistic shot (currently on display at Moriyama – Tōmatsu: Tokyo at Maison Européenne de la Photographie, Paris) is emblematic of Tōmatsu’s freewheeling form of counter-journalism, hovering somewhere between sharp historical documentation and highly-stylised expressionism.

In 1976, the reclusive Tōmatsu confessed that he bore witness to the raffish, rebellious and sexually liberated youth culture of Shinjuku “through the eyes of a stray dog”. While he despaired of that generation’s descent into decadence, how was Tōmatsu himself perceived by the young? It was long understood that for the unruly Provoke photographers who rose to prominence in the late 1960s (employing experimental aesthetics to reflect the turbulent times in which they lived), Tōmatsu symbolised the conservative old guard who were to be rebelled against.

However, with the benefit of hindsight, historians have re-evaluated Tōmatsu’s influence on the Provoke crowd, resituating him as the spiritual forefather of the movement. As evidenced by the MEP’s presentation of Tōmatsu’s work alongside Daidō Moriyama’s (one of Provoke’s helmsmen), mapping out affinities seems entirely fitting. Tōmatsu translated the fleeting fury of political opposition into a radical language of representation, one less bound to pure description than to visceral experience. And that’s what Provoke was all about: photography as protest. 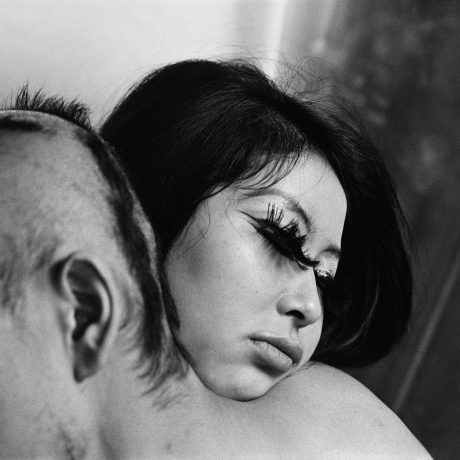