Tits, ass and teeth, that (un)holy trinity, is at the forefront Virgin Territory, a video installation piece from Vincent Dance Theatre that explores the terrifying ruse of children “dancing for the camera” and “playing in an adult online world”. It doesn’t scaremonger, nor does it sensationalize; but the piece does draw on the real-life experiences of young people aged between around twelve and fifteen, who share their experiences around the “pornification” of culture, and the expectations placed on young girls and their bodies, namely in sharing them with boys (and men) via the internet.

“What does constantly performing for the camera do to our sense of self worth? I see for myself how the adoption of porn-influenced style and imagery in mainstream pop culture is affecting how young girls dress, behave and present themselves online and in real life,” says Charlotte Vincent, founder of the Vincent Dance Theatre. “They seem to be validated not by real, live friendships but by Instagram likes and Facebook followers.” This, she sees as a huge contributor to the rise in mental health problems, self-harm and “self-loathing” in young people; and she hopes this artwork will serve to provide a “provocation” and “wakeup call” around the culture we’re living in that’s become inherently damaging to the young people growing up in it.

Vincent has long used her choreography and platform to further feminist messages, and this piece was first conceived as a live performance in 2014 before becoming a video installation for the Brighton Festival in May 2017. Since then, it’s taken on various formats and is this month being shown at Towner Gallery in Eastbourne (until 10 March) and Turner Contemporary in Margate, from 12 to 14 March.

Since the piece deals a lot with social media and the way young people communicate, which can change really rapidly, has much changed in how you feel about the piece since it was first shown in 2017?

Tell me a little bit more about what you mean about the “pornification” of culture, and where we’re seeing that.

Politically I’m extremely concerned about the way we’re building up our young people. We can’t get rid of digital devices—we have to learn to live with them, and it’s up to all of us. I worry as a feminist, but we’re so entrenched in that. Even when I go into universities to teach dance, people don’t want to sweat or get dirty, they arrive in full hair and makeup.

You mentioned that you’re a mother, how far do you think that’s made you more aware of the issues explored in Virgin Territory?

I’m the mother of a boy and I want him to grow up understanding consent and that there should be harmony between all genders—male, female and all in between. I also want him to see that the real world is as important as the digital one; so I limit his access to devices. I want boys to see that girls can do anything; and that if boys want to dress in pink or do things that are still seen as “girly”, that that’s great too.

How as someone involved in dance do you think you can help challenge those sort of things?

For Virgin Territory we had a six to eight month period of research in the community where we ran workshops and invited groups of young women from schools, colleges, dance companies, pupil referral units and charities we know in and around Brighton. In most of those groups, there were people I followed up with to record interviews, and those were edited down to make the piece… so they’re real voices, real testimonies. We’re just trying to translate and represent these real life stories.

What comes through is the resilience and power of the young girls. Two have continued into further education in dance, and one just got into the National Youth Dance company, which is huge.

Why is the digital world and the way it affects sexualization and women so important for you to explore in your work?

There are many fantastic, brilliant things about the online world, of course. But the flip-side is things like sexting and regretting it: the body becomes a currency to be passed around, which is very unhealthy… It’s eroding privacy.

You can get literally anything you want and see it in your hand. I’m really anti-pornography: I think it’s damaging, I think it’s objectified women; and advertising that leans on that power imbalance and consumption of women in pornography is appalling. So I’ve always made work around gender politics from a female experience point of view, and tried to put the female experience on stage. That can be triggering, as all of us are on some spectrum of trauma somewhere: we’ve all been wolf whistled in the street, at the smallest end of it. I’m just keen for people to open their eyes and for people to see the pressure to look good all the time and be sexually available all the time. I’ll use my platform to do that, but it’s a life-long commitment of pitting gender politics as art and poking it and saying, “What do we think about this?”

This sort of thing isn’t just relevant once a year, it’s every day. I do it as a mentor and leader and as a mum: I’m trying to keep the pressure up because I don’t think it’s in men’s interests to. The speed of change isn’t fast enough.

Beyond the Family Album served as a reminder of the taboo that remains around the ageing, ill and inconveniently sexual female body.
Read More 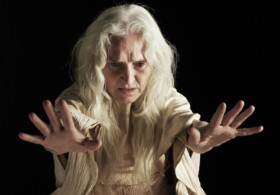