If you look closely at Banksy’s Deride and Conquer, you can see smudges in the paint, marks left by bubble-wrap that the painting was packaged in while the canvas was still wet. Steve Lazarides remembers this because he was the one who picked it up from Banksy’s studio to take to a collector. In the late 90s, Lazarides—who directs Lazinc, his gallery on Sackville Street, where an exhibition of Banksy’s “Greatest Hits” from 2002-2008 has just opened—would drive all over the country with the artist’s work in the boot.

Before the Banksy boom in the early 2000s, Lazarides was working as a photographer, and was one of the only people documenting the artist’s street work. Later he would become Banksy’s agent, but in 2009 the pair would split, according to some reports, acrimoniously (though Lazarides says there’s no hard feelings now). The current exhibition was mounted without Banksy’s involvement.

Deride and Conquer was produced at the peak of Banksy’s career, before he stopped doing selling exhibitions in 2008, in favour of social interventions like Dismaland and the Walled Off Hotel. Unusually, it’s painted rather than stencilled, and has rarely been seen in public since it appeared in Turf War—the 2003 exhibition on Kingsland Road. This show sparked media controversy and attracted a particularly militant animal rights activist on account of the fact Banksy had graffitied directly on to sheep and cows that were milling around the warehouse space during the show. Turf War transformed the then 28-year-old Bristolian into a household name—albeit an anonymous one—and was closed down by police after just two days. While looking at the work, Lazarides reflects back on the moment Banksy blew up, telling Elephant, “we never expected it, we were worried no-one would come, then there were people queuing up outside the door. We were just in the right place and at the right time.”

“Painting sucks, art sucks — hopefully I’ll get out of it soon and find something a bit more worthwhile to do with my time”

Banksy’s works are anchored in their moment; the artist only ever produced paintings for specific shows, with ideas of how to unsettle the audience, and fling a political message in their face, usually in response to a global crisis—Gaza, Guantanamo, Syria. Deride and Conquer, however, is timeless Banksy sarcasm on his home ground, with some of his notable motifs: the Union Jack, the monkey, and the crown. It is Banksy as the satirical, self-hating Brit. Its anti-establishment, anti-elite sympathies are as subtle as a smack in the face—like many of the artist’s works.

“Painting sucks, art sucks—hopefully I’ll get out of it soon and find something a bit more worthwhile to do with my time,” Banksy told Artnet’s Joe La Place at the time of Turf Wars. “I don’t like the gallery system. These days, the value of art seems to come down to whether one millionaire likes it or not.” This week, three paintings were sold (on the secondary market) for between £500,000 and £1.5 million at the exhibition in Mayfair before it had even opened. With its pristine parquet and sweeping staircase, the surroundings for Banksy’s works today couldn’t be more different to their past life in the back of a van.

Love him or loathe him, Banksy has successfully side-stepped the art world, and possibly more than any other British artist in our times. Deride and Conquer is a reminder that he was once just a kid with a naive dream to change the system.

Until 25 August at Lazinc Sackville 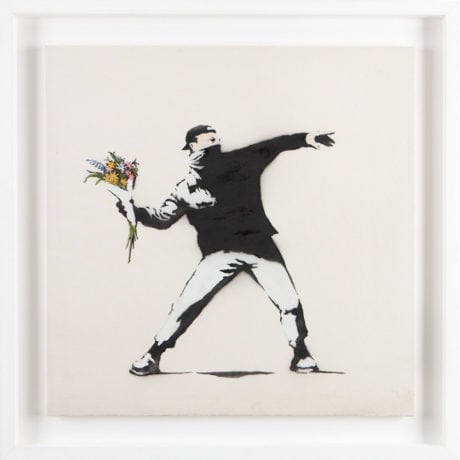