As we sit down to write this article in Belfast on 5 December 2021, it marks exactly 100 years since the Anglo-Irish Agreement was signed and Northern Ireland came to exist as a separate entity, since which time it has been defined by almost constant political and violent unrest. In spite of the Good Friday Agreement of 1998 and the subsequent economic transformation of the country, the weight of the conflict continues to bear down upon the emotional, physical, political and cultural health of its inhabitants.

From childhood in our native Northern Ireland, we navigate this conflicted territory through a series of learned and intuited codes, language and allegiances. It is from this intricately nuanced and highly contested context that Array Collective have emerged. Based in Belfast, they were awarded the 2021 Turner Prize this December. They are the first winners from the region of the most high-profile award to be given in British art.

Composed of 11 artists, Array are based in one of the last remaining inner-city studio buildings in Belfast, and have been working together since 2016. The group maintain independent practices but come together regularly to protest the most urgent social justice issues particular to Northern Ireland: mental health, language rights, abortion, workers’ rights, social housing, gentrification and LGBTQ+ rights.

While artists can often write themselves into radical positions from inside the nurturing spaces of galleries, Array have reacted spontaneously and generously to the needs of their city. They have shown up on the streets and brought energy, wit, historical irreverence and a sense of the absurd to the bleak political decisions of the past decade.

At the centre of the work, currently on show at the Herbert Art Gallery and Museum in Coventry in connection with the Turner Prize, is a three-screen film of an event, The Druithaib’s Ball, which took place in July 2020. The event was created with and for an audience made up of peers across arts and activist sectors, inviting us to “an evening of performances and craic to mourn and mark the Centenary”.

The film is presented within a recreation of a síbín, “a pub without permission”, as the collective put it, essentially an illicit bar where alcohol is sold illegally. The installation is replete with the many material trappings of such spaces, including more than 80 artworks produced by Array members, by collaborators, and carefully selected from community and archival contexts.

“Array have shown up on the streets and brought energy, wit, historical irreverence and a sense of the absurd to the bleak political decisions of the past decade”

Throughout the film, a cast of activist voices traverse 100 years of violence, suffering, sorrow, solidarity and hilarity. Array’s unflinching take on the centenary of the Anglo-Irish Treaty champions the causes they have been working on, with nothing out of bounds, too difficult, or too precious to be thoroughly interrogated.

Array have never played the art game. Arguably it isn’t really an option in Belfast, with no multi-annual funding, itinerant spaces, and a public so attuned to the idea of ‘notions’ (airs and graces) that they wouldn’t stand a chance. Instead, Array represent the DIY collective working which has come to define the visual art scene in Northern Ireland throughout the past decades.

Lacking an art market and the more expansive arts infrastructure of neighbouring capitals Dublin, Glasgow and London, the art scene in Belfast has a generous approach to supporting artists from within the community itself. This is coupled with a heightened awareness of the dubious cultural priorities of those who hold the purse strings.

The overwhelming local response to Array winning the Turner Prize has been one of enormous pride and relief at having this type of collective practice acknowledged and championed. “I was always convinced that the North of Ireland is a fertile ground for creative work, especially in the field of engaged practice,” Peter Mutschler, director of non-profit arts organisation PS² reflected following the win.

“Array’s work will inspire many,” he continued. “It has opened new perspectives, how we make and validate art and where it happens. This win marks a seismic shift. Trembles should also be felt by the funders, adopting a long-term, ground up funding strategy for the arts.” For many, this recognition for the local arts scene is long overdue.

Unfortunately, all too often any form of formal validation comes externally, from outside this region and beyond the sector. And yet, the UK media’s reporting on Array’s win only reinforces a longstanding lack of comprehension around the political climate of Northern Ireland and the artists working within it.

“Far from having only the ‘thinnest smear of artistic meaning’, this work is not anti-intellectual: it’s anti-imperialist”

The original press reviews of the exhibition railed against the concept of rewarding collectives whose work was deemed more social work than artwork, deeming it “an embarrassment”, with even some reviews lauding 2021’s shortlist as the prize’s “most virtuous ever”. Array were generally given an easier ride for the charm and authenticity of their síbín. However there was next to no critical engagement with the content of the installation, deemed little more than a theatre set by some critics.

This is particularly frustrating as the folksiness of the Array aesthetic is representative precisely of its responsiveness to local conditions. Their city-centre location enables them to turn up at protests with banners on which the paint hasn’t yet dried. Far from having only the “thinnest smear of artistic meaning”, this work is not anti-intellectual: it’s anti-imperialist. It is richer than most will ever know. This “stuff” is the fabric of our lives; the “relentless yapping” the inconvenient truth of our existence.

Tell us again that it’s “fun” to create a pub mop bucket in the shape of the ferry which takes our pregnant people to Scotland for healthcare that is still illegal in Northern Ireland. Array’s description: “Soaked in shame by a country that loves to export our discomfort”. Tell us that sticks, called Bata Scór, which were worn around the neck and used to record instances of children speaking Irish instead of English so that the appropriate number of punishments could be administered, contribute to an “imagined spiritual past” in the context of a UK collecting institution. Tell us that a T-shirt bearing the slogan “Eire Says Relax” (a paraphrase of the banned 1983 Frankie Goes to Hollywood song), referencing both the subjugation of women and of LGBTQ+ communities in Northern Ireland, is “weak”.

Press representations of the divided, binary communities of a backward Northern Ireland historically presented to the world caused much mirth and not insignificant ill-feeling about how little is known or cared about this region and its people. Not least the discussion about whether Array identify as Catholic or Protestant or (shock!) both.

“Perhaps you needed to be there [to understand it]” railed one critic. But it’s inconceivable to artists in Belfast that art critics from London would, indeed, ever be here. Despite the post-Brexit arguments over a sea border, a more amorphous divide has long existed, one that annexes Northern Ireland’s cultural exports from the rest of the UK. Northern Ireland spends less than half the amount on the arts per member of the population than England does.

This has to change. The time is now.

Ciara Hickey is Curator of the PS² Freelands Artist Programme and co-Director of Household Belfast.

Jane Morrow is an independent visual art curator, writer and PhD researcher with a specialism in artist development. 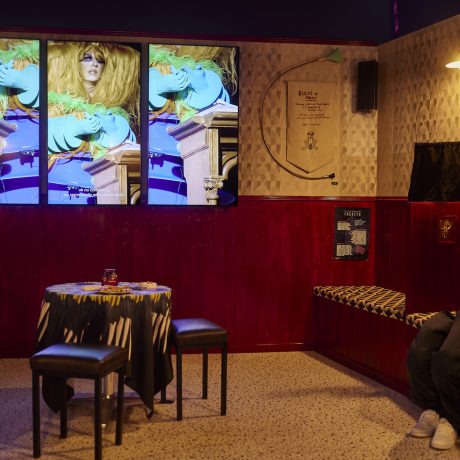