November 13, 2017. Eager rap fans are waiting at newsstands to get their hands on New York Magazine, because on the cover is one of the genre’s biggest stars—Belcalis Almanzar, aka, Cardi B. The American star, then twenty-five, had released her debut single, Bodak Yellow, in June that year and made it to number one in the US—only the second time a female rapper had topped the charts, since Lauryn Hill’s 1998 I Like It. In the video, Cardi cavorts on a camel in the desert.

The frenzy around Cardi B’s explosive debut wasn’t only about her flow—her ideas on feminism were also sparking debate. As she astutely observed in a 2016 video posted to her Instagram, “The problem is that being a feminist is something so great, but y’all don’t want me to be great”.

Cue Hassan Hajjaj: the Moroccan-born photographer known for his mash-up of Marrakech and East London styles—by way of the masters of West African studio photography. Hajjaj is a self-taught artist who started taking pictures in London in the 1990s, after buying his first camera in 1989. He inadvertently found himself in the midst of London’s golden era of art, fashion and media, the decade that brought the YBAs and the Spice Girls, Jefferson Hack’s empire and magazines like The Face, as well as Britpop and club culture.

“She’s loud, bold and proud, in gold and glitter against a hot pink pattern of stars, but she’s just as iconic as his belly dancers, henna girls or surfers”

Hajjaj set up shop in East London, selling clothing and furniture he designs, as well as his art, and often staging shoots there. The rich yet raw, party atmosphere of his shots (sometimes set up on the street) quickly became popular; but the subjects Hajjaj has continued to shoot, despite his success, have been his own idols—the market sellers from Marrakesh who appear in Kesh Angels or the musicians who feature in My Rock Stars, shown at his Somerset House solo in 2017.

In fact, it’s Hajjaj’s portraits of his people, not his celebrity portraits, that he has continued to present in exhibitions and at art fairs, and that he has continued to champion in interviews. He established his style with his own heroes, not his celebrity work—and this is important when we come to his portrait of Cardi B. It’s what makes this image of the superstar photo stand out—she’s loud, bold and proud, in gold and glitter against a hot pink pattern of stars, but she’s just as iconic as his belly dancers, henna girls or surfers. Hajjaj’s pictures of the world’s icons, next to his own, show us how photography can put anyone on a pedestal.

The environment that shaped Cardi B—also a self-made star born to immigrant parents—in the Bronx, in the 2000s, wasn’t so different to Hajjaj’s formative years. That connection is something that Hajjaj always manages to bring out, no matter who is standing on his stage. His work is a document of a nomadic, hybrid, creative tribe; a community united by his camera. 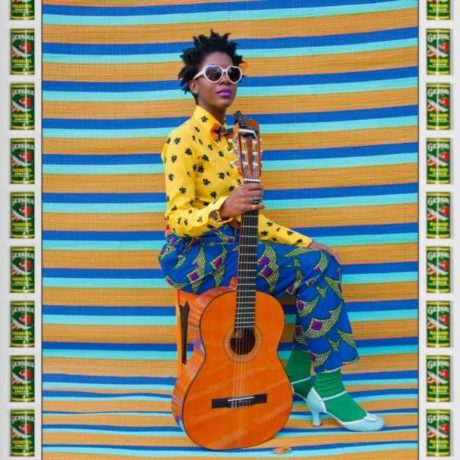