For most people who love Mark Leckey’s 1999 video work Fiorucci Made Me Hardcore, it’s the euphoric invocation of youth and rave culture that touches them. The clips that make up the video, which is just shy of fifteen minutes long, depict bodies moving, often in trancelike unison. The broad sources of footage are pulled from club scenes across the UK, spanning a broad spectrum of time and musical genres, creating a common thread that speaks to human connection and the universal power of night culture.

The film at once evokes very specific memories and feelings for those connected to the scenes represented, while also reaching for something more universal, and even transcendental. Jamie XX’s 2014 track All Under One Roof Raving, which samples audio from Leckey’s film alongside other rave clips, alludes to this sense of a higher being. My own connection to Leckey’s work begins with the local and the deeply personal, as it connects me to my regional cultural heritage.

Fiorucci Made me Hardcore opens with clips from the 1970s Northern Soul scene, clubs in towns in Northern England and the Midlands. The ordinaryness of the surroundings belied the energy of the nightlife, where locals danced to imported US soul records. Clips sourced from Tony Palmer’s footage, filmed for Granada TV’s This England programme, followed people who went to the famous “All Nighter” at Wigan Casino at the end of a long day at work. The Casino in Wigan was arguably the epicentre of the scene, competing against hotspots in Manchester, Blackpool and beyond. It was voted “The Best Disco in the World”, ahead of New York’s Studio 54, in a 1978 Billboard poll.

“Dance moves have a peculiarly regional lilt; dancers stalk the dance floor, proudly leaning back and swinging from side to side”

Dance moves, too, have a peculiarly regional lilt; dancers stalk the dance floor, proudly leaning back and swinging from side to side. These gestures and gaits might eventually evolve into the stage swaggers of the likes of local Wigan legend Richard Ashcroft from The Verve, or other North West music stars, such as Ian Brown or Liam Gallagher, with their unmistakable stances. It speaks to something I know about the region, that magic “je ne sais quoi”, something poet Tony Walsh captures in his poem for Manchester, titled This is The Place. Speaking of the industrial workers who created the city and its surrounding towns, including Wigan, he stated: “They left us a spirit, they left us a vibe”.

In Palmer’s full film, attendees to Wigan Casino spoke at length about what the club means to them. In clips on show at Wigan’s local history museum, devotees make themselves clear: “I don’t know what I’d do if Wigan shut down; life wouldn’t be worth living.” In Leckey’s video work, their distorted mutterings become dreamlike.

Though Fiorucci Made Me Hardcore was created in 1999, I discovered it around the time of Leckey’s Tuner Prize win in 2008. I was living at home in Wigan, having moved back after graduating from the University of Manchester and beginning a master’s degree in journalism in Lancashire. I began to do short stints of work experience in media jobs in London, attempting to break the cycle known to anyone who has tried to make the leap to the capital from the regions. I was looking for a job without a place to live, and securing a place to live without yet having a job. Eventually, via a questionable rental in a mould-covered room in Hoxton, I began to establish myself in London.

Despite placing myself in the correct geographical location to pursue this career, the journalism industry is one where opportunities are often secured through personal contacts. It is notoriously difficult to break into. There was also the difference in cultural reference points that my London-centric peers had, which felt intimidatingly cool. Leckey’s Fiorucci Made Me Hardcore, titled to reference the way in which particular clothing labels can provide a sense of belonging, gave me reassurance that I too came from somewhere with rich cultural history. Leckey’s work showed me how this legacy connected me to others in cities around the country, including London.

That the cultural history of the town I was from was not just archived in a curious documentary made by a local television channel, but had been elevated into the art establishment, felt like a personal boost. Until then, I’d only ever seen the North West represented on this scale through the likes of L. S. Lowry. The magic work of Wigan artist Theodore Major, a peer who Lowry himself considered the better painter, never reached the same acclaim.

It wasn’t that Mark Leckey simply drew on the music scene of the North West and made it look cool; his film is so much more than nostalgic wallowing in past glories. He channeled something of the magic that many of those local to the region know resides there too. His depiction of nightlife as transcendental, connecting people with a higher power, seems almost religious.

“It wasn’t that he simply made the music scene of the North West look cool; Leckey’s film is so much more than nostalgic wallowing in past glories”

It is a spirituality present, too, in Theodor Major’s paintings of moody industrial Wigan landscapes and weathered figures. Major railed against Orwell’s social injustice polemic The Road to Wigan Pier, where Wiganers were depicted as a downtrodden underclass. Instead, he saw humanity, warmth and even magic. He described an ironworks as the most beautiful place he’d ever seen; when the light from the furnaces hit the wet ground during a rainstorm, he saw playing children as if they were “walking on fire”. 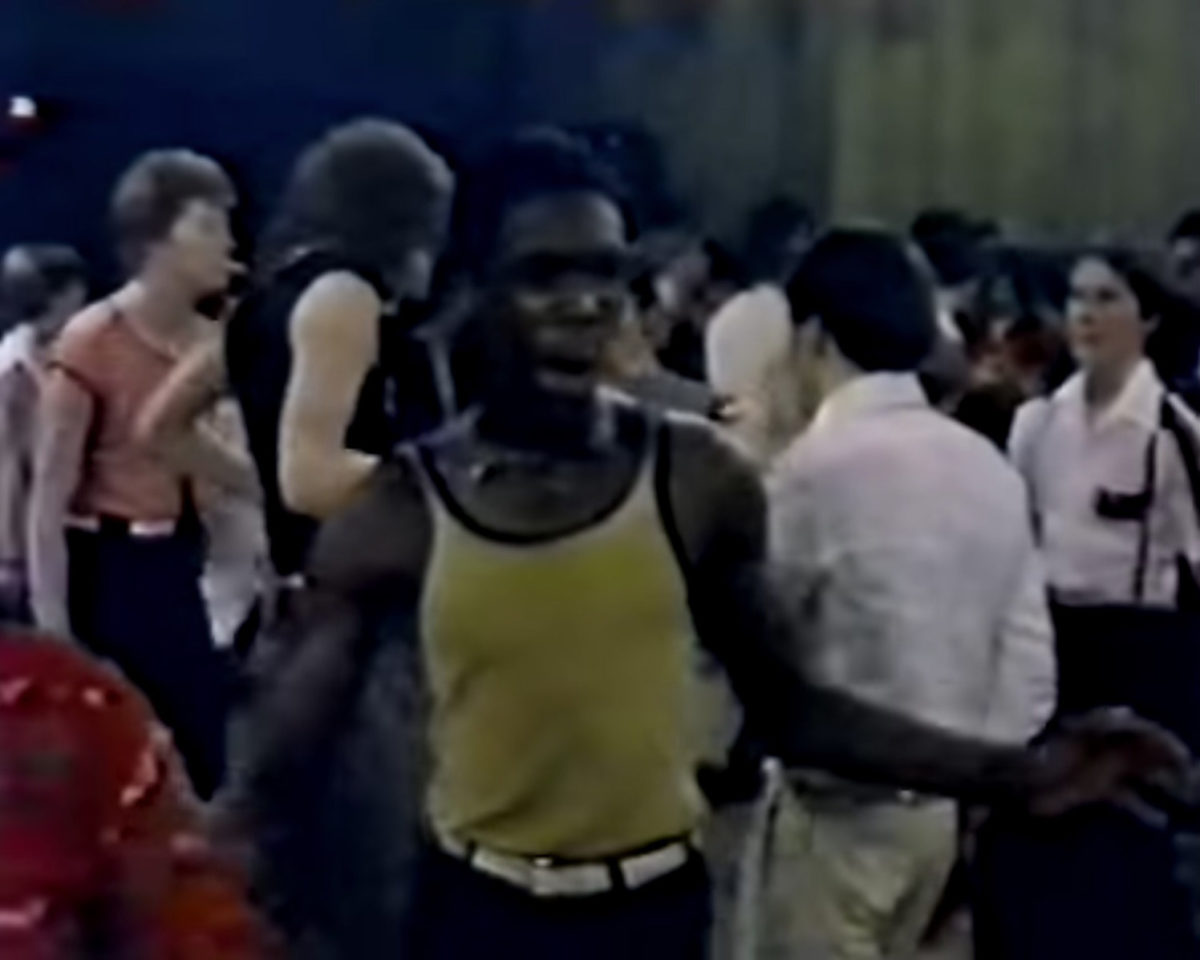 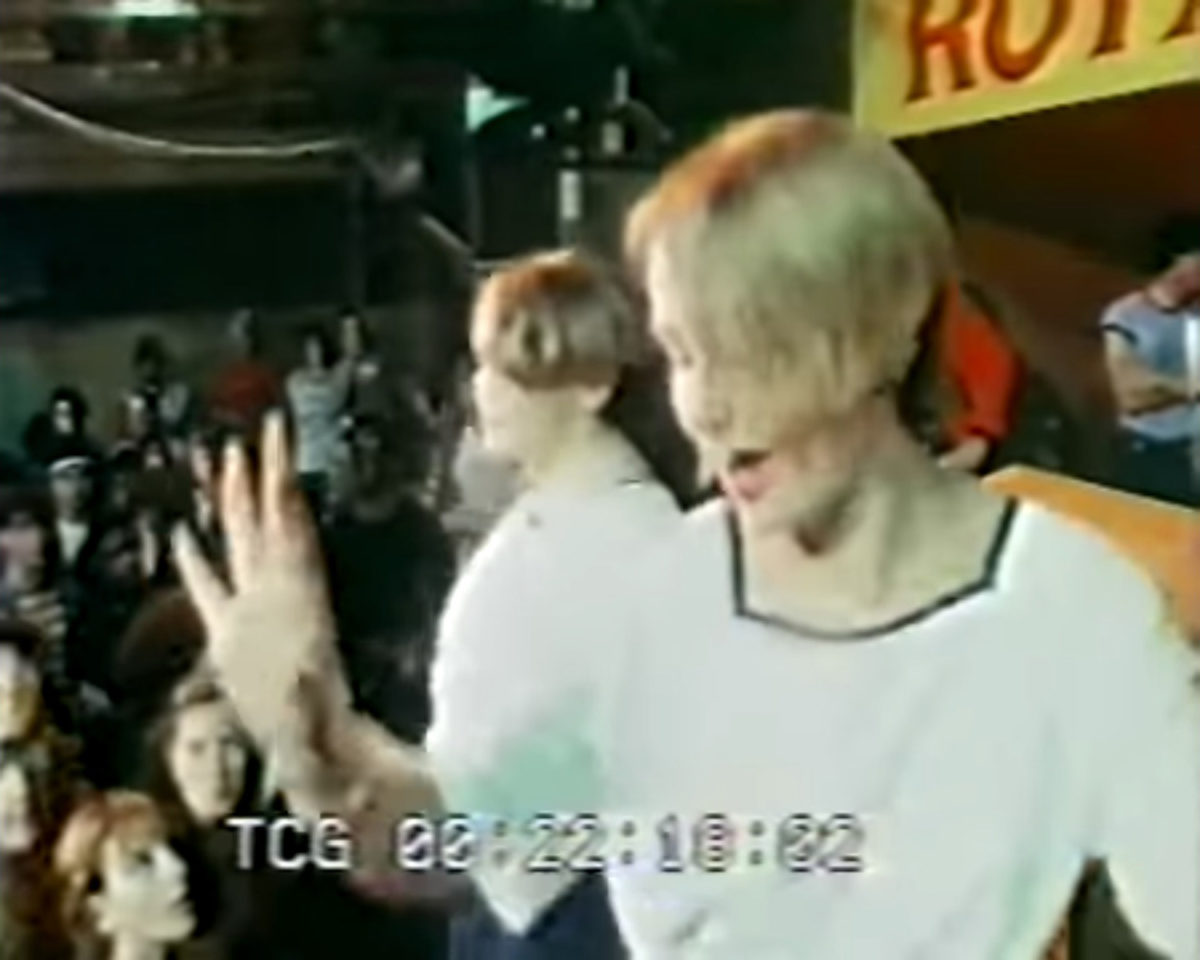 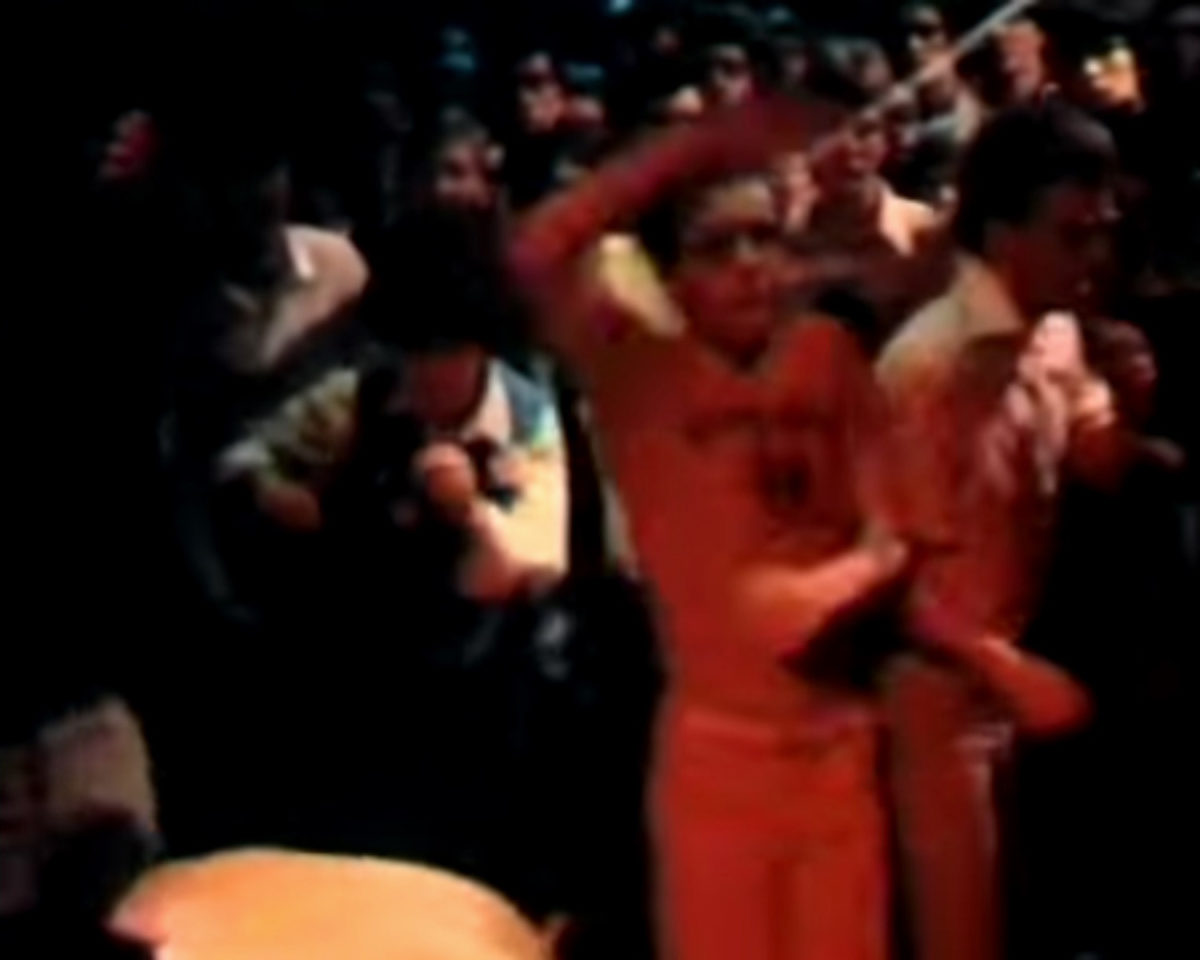 Having now lived in London for almost a decade, Fiorucci Made Me Hardcore takes on a sentimental quality for me. It connects me to the place I’m from, via a cultural movement that took place before I was born. Wigan’s music scene moved on in the 1990s and 2000s to dance music centred around Bounce at a now-demolished club at Wigan Pier. Wigan Casino itself burned down in 1981.

Memories of Northern Soul echo though the town: posters, photographs and memorabilia for all-nighters are displayed in Wigan’s main shopping centre, situated between a Costa Coffee and the car park. Palmer’s clips still play at the local history museum on loop alongside other figures of civic pride: heroes of sport, industry and other cultural achievers, including novelist James Hilton, who is credited for establishing ‘Shangri-La’ in reference to a fictional place of earthly delights. It’s always seemed significant to me that his profile and this aspect of his contribution to the world would be positioned adjacent to vignettes from the Casino.

“Posters for all-nighters are displayed in Wigan’s main shopping centre, situated between a Costa Coffee and the car park”

I recently revisited Fiorucci Made Me Hardcore, when it showed as part of Leckey’s huge installation O’ Magic Power of Bleakness at Tate Britain. The show included a life-sized replica of a motorway bridge on the M53 on the Wirral, Merseyside, where the artist grew up, which played host to a new folklore-inspired, video-projected play. Teens dressed in Adidas drank a mystical potion, which put them in a trance-like state, echoing the rapture in Fiorucci Made Me Hardcore.

It felt like an alchemical mash-up of local references: trackie-wearing lads drinking in urban enclaves and the story of a bridge-dwelling troll, conjuring tales of the region’s history of witches of the 1600s, or the kind of “hobgoblins” that a shemanic Mark E. Smith summons in The Fall’s “City Hobgoblins”. Fiorucci Made Me Hardcore played alongside it, and cemented what Leckey’s work has always said to me: in the North West, there is magic.

All images: Mark Leckey, Fiorucci Made Me Hardcore (film stills), 1999. The full film can be watched here.