If art criticism was a sport, and Frieze week its World Cup, then I would not be an athlete going into it in peak form. Firstly, I’m just barely coming off the back of what has apparently become my annual chest infection, I’m slow and wheezy, and will be spluttering around the city like some old geezer with emphysema, having to constantly say, “It’s not COVID, honest” as I hock up loogie after loogie. Gross.

Secondly, I’m out of practice. Frieze and all the big exhibitions that accompany it normally come after a nice relaxing summer break, but instead are now arriving after almost two years of me being furloughed and then working part time. I am not up to speed. I need to get stretching and shit.

Especially because Monday is hectic. After coffee and a bagel, I cycle from Tottenham down through the City and to Tate Modern for Anicka Yi’s Turbine Hall installation. It’s sunny and warm on the way down, and I bump into Louise Benson, who commissioned this piece, on the way to Liverpool Street. She is cycling in snakeskin heels, and I realise that my homeless death metal fan vibe is not up to Frieze week standards.

“It all just feels weirdly normal, like the past two years haven’t happened. Quite comforting really”

The Turbine Hall is a whole heap of OK, and after chatting with a couple of art writers for a few minutes I head to 180 The Strand for their big autumn immersive art thing. They are not ready, and the place is swarming with dudes in high-vis vests. They are still more ready than the ICA, though, who apparently forgot they had a press view at midday. Doors are locked, and me and two other journos seem to have made a trip for nothing.

I go to AA Murakami at the new Superblue space instead. It’s heinous, a cynical money grab. My opinion on it means nothing though, because the people who like this shit will still happily pay their £12 for 12 minutes of access. That’s enough art for one day, so I head home to write.

Tuesday I write, edit and post my reviews, and instead of going to art parties in the evening I play five-a-side football, where I put in a defensive performance that’s as close to a work of art as anything else I’m going to see this week. Truly beautiful.

“It’s the best thing about the fair, just loads of people you only see once a year chain smoking and stressing about meeting the right collectors”

Wednesday morning I feel antsy, so head out of the house early and go see shows at David Zwirner, Thaddaeus Ropac and Simon Lee before heading to review the ICA show and then on to Frieze. The ICA show is no good, which is a bummer, but the fair is… somehow great?

It all just feels weirdly normal, like the past two years haven’t happened. Quite comforting really. I’m reviewing it for the first time this year for another publication, so have to actually look at the art. There’s even more painting than normal, which is saying something, but plenty of it’s good so I’m not complaining.

It’s exhausting though, so eventually I head to the outside area which is where all sane people spend their Frieze time. It’s the best thing about the fair, just loads of people you only see once a year chain smoking and stressing about meeting the right collectors. By 5pm, it’s beer o’clock, and I catch up with some of the guys from Plaza Plaza and tell them all how good I was at football last night.

I should go home. I mean to go home. But I get distracted on my way out of the tent by some art writer pals. Fun fact, if you have more than two art writers in one place, you’re legally obligated to go drinking and complain about your salaries.

“If you have more than two art writers in one place, you’re legally obligated to go drinking and complain about your salaries”

We go to the pub down the road, and multiple pints in, I somehow think it’s a good idea for us all to go to some art party at the London Edition hotel. It is not a good idea. I was wrong. I have never wanted to leave a place so quickly, it’s abysmal. Despite the music not being loud at all, it feels infinitely too loud. Every fibre of my being hates it here.

I persuade everyone to go back to the pub. This is also a mistake, because I do not need the extra pints. I eventually manage to head home dreaming of feeling sober.

I wish I could tell you I spend the rest of the week schmoozing with artists and collectors, but I have apparently infinite articles due, and need to go put in a shift or two at OOF Gallery, the space I co-run in the Tottenham Hotspur Stadium.

The stadium has been converted to be used for NFL games for two weeks, and all of our visitors are, unsurprisingly, NFL fans. An art gallery in a football stadium is a tough enough sell to football fans, even though all of our shows are about football, so trying to get American football fans to connect with a Sarah Lucas sculpture is… challenging. One of our sculptures gets knocked over by some old Americans swinging their shopping bags around. There is panic, but the work is ok. Running a gallery is stressful.

“I am weak. Frieze week has broken me, and it didn’t even try that hard”

By Friday, the chest infection has decided to make a comeback. I am weak. Frieze week has broken me, and it didn’t even try that hard. The parties and catch-ups are one thing, but it’s the sheer amount of actually having to do your job that really gets you. I got into art writing to swan about and take it easy, not, like, work and shit.

I spend Sunday listening to some new purchases by bands with names like Pestilent Death, Witch Vomit and Pustilence. After the endless commercialism and sales and auctions and champagne, it’s just nice to know that somewhere, out there in the world, there are people writing songs about death and Satan and not giving a shit if anyone buys it.

See ya later Frieze week, I need a year off before doing that again.

Read all five of the diaries written by five different writers 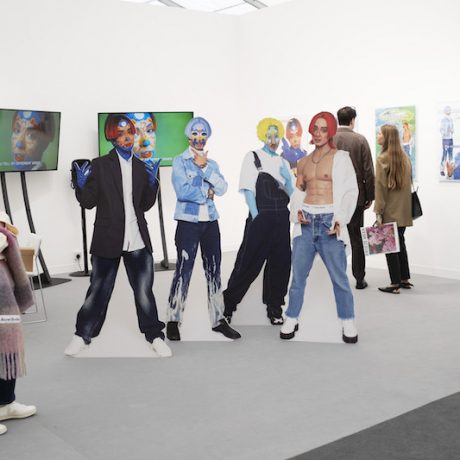