My partner Guy Oliver and I end up leaving Margate far later than we expected. It all seemed so simple: go into the studio, glaze some last pieces, pop them in the kiln, hop on the train.

We have made jam-packed plans. We were going for an early dinner at José in Bermondsey, then off over to see Sophie Jung’s show at Vitrine, then the Elephant and Alexander McQueen party. But that was before I had a meltdown.

Firstly, the glazing takes far longer than expected. I feel completely rushed, time slips away and I still need to dye my hair before we catch the train. Also, if I’m honest, a few things are playing on my mind. This is my first Frieze and I can’t fathom that my work is good enough to be there. That terror is also combined with the feeling that I myself am not good enough to be there.

This is going to be the first time in a long time I have seen a lot of friends and people in art, who scare me. I’ve definitely put on pandemic weight and I have no idea how to dress for parties anymore. I have no idea what parties are like anymore.

So we end up being sweaty and frazzled on a late train. We check into our hotel, and I sit naked with yellow hair dye and a bin bag on my head, trying not to touch anything. Somehow, we get dressed and out in time. The Elephant party and the Alexander McQueen party are both being hosted at The Standard, which really plays to my laziness.

I have no idea why I’ve been invited to the Alexander McQueen party, but we hear there are canapés there, so we pop in. It is very, very fashion. The stamp is UV! Very The Matrix, zero colour, lots of PVC and slicked back hair. Skinny Margaritas and champagne, and yes, canapés. Guy and I do a lap of the room to see if there are any celebs because I really love celebrities. I’m not disappointed: Eddie Redmayne is chatting to someone, and Guy trips over Christine and the Queens.

We decide that we are too old to try so very hard to be cool, so we go to see pals at the Elephant party. All my anxieties are quashed instantly. It is so lovely to see friends and I have a great time. A bit too lovely, TBH.

I go a little over the top when the free bar runs out and start buying shots for everyone. I live to regret those shots. When the party ends just after midnight we have to be led out past the still-going McQueen party. With lots of Dutch courage I run past security, dragging a drunk Guy, and get back into the party. A woman grabs me. “You aren’t supposed to be here!” she shouts as I try to wriggle free.

“Check my arm!” I shout back. She gets out her scanner but the invisible UV stamp isn’t showing up. She is ready to kick me out but then, finally, it gleams blue. “I’m so sorry,” she says, “Come through.” We are in.

I wake up in my shoes at 11am with reception banging on the door and a banging headache. I use as many of the free hotel toiletries as possible and then Guy and I get tacos at El Pastor in Borough Market.

We check into our second hotel, Kettners, and just touch all the lovely things in the room for an hour. Everything smells so nice and is so soft. They even give you a lovely woven bag with condoms in. I love those little touches.

We get to Frieze at about 4.30pm but I wish we’d got there earlier. There is so much to see. As we queue, I cling to my Princess Diana handbag and nervously make Bake Off tent jokes. I’m even more nervous than I expected.

“We check into our hotel, and I sit naked with yellow hair dye and a bin bag on my head”

Fortunately the Carl Freedman booth, where I am showing my work, is located at A1 so I see gallerists Rob and Carl as soon as I get in the tent. Relief floods me. The booth looks brilliant. I am so happy to be showing with Jon Key and Benjamin Senior, their painting styles are so joyous and vibrant.

And my works look happy too. It’s an odd sensation to see something that has so intrinsically been a part of you going off out into the world. I have been making these pots over the past year. They have been a sort of diary and I have made them when I’ve felt sexy, shameful, abandoned, frightened and everything in between. They feel easy and fluid and celebratory.

As for the rest of Frieze, I’m not sure that I got to see everything that I wanted to as I got very lost. Firstly I fall absolutely in love with Ursa Major by Florian Krewer at Michael Werner. The work is so enormous and bright and roaringly smutty. I want it. Now. I’m always drawn to work that doesn’t quite fit in and that feels like a massive hit of sour lemon at the back of your teeth.

Tracey Emin’s neon I KNOW I KNOW I KNOW also tenderly slaps me round the face. Tracey was the person who made me want to become an artist. She always seems to find the right words and phrases to hit you deep in the soul.

She’s now my neighbour in Margate and, as well as giving me life lessons and consoling me with trifle, joins us for England Euro matches and disastrous movie outings. So it’s weird to bump into her at Xavier Hufkens booth surrounded by people. I’m going to walk on so I don’t embarrass myself trying to get her attention, but she comes over to me and Guy and introduces us. It feels like we’re back in Margate again.

“The work is so enormous and bright and roaringly smutty. I want it. Now”

Moving on, it is fantastic to see Jala Wahid create such a luscious and dynamic installation at Sophie Tappeiner Gallery. Every time I see her work she pushes and pulls it in another direction, always surprising me. Then there’s Marianna Simnett keeping it as dark, sensual and uncomfortable as ever at Societé Berlin with her lenticular animations of horses breeding.

I finally get to see Gina Beavers’ gluttonous paintings in the flesh and they are everything that I hoped they would be. Alberta Whittle has an incredibly confident and emotive booth with Copperfield: beautiful bronze tongues dot the wall like a flurry of staccato utterances.

It is fantastic to hear that Rene Matić’s works (we’ll be showing them at our gallery Quench in the New Year) have been acquired by the bloody Tate! I loved their show at Arcadia Missa earlier this year and it’s gorgeous to see my friend’s work getting the recognition it really deserves.

And of course, there’s the solo both by Sin Wai Kin at Blindspot Gallery, talking deeply to my core by playfully addressing the fluidity of identity through their immensely precise take on boyband tropes.

While having dinner, The Guardian’s art critic Jonathan Jones releases his review of Frieze and is incredibly kind about my work and Guy’s willy. What the fuck is happening? I am so overwhelmed and shaken that I ring my mum to share the news with her. But she sees Russell and Rob in the background and is far more excited to FaceTime them. I respect her for that.

The night gets a bit blurry from then on. I meet and chat with the lovely Kate Bryan but the rest is a haze. I have probably disgraced myself entirely but it really is one of the loveliest days I’ve ever had.

Guy and I wake up in the beautiful hotel and realise that, although we have plans for the rest of the week, it’s time for us to return to Margate. It is all getting a bit much for me and I really just fancy watching Silent Witness and having a curry.

Before we leave London though, we catch two great shows. Tracey’s beautiful and tender exhibition, The News Is I Love You, at this lovely little newsagent on Chiltern Street, and Patrick Cole and Dominic Watson’s The Centre at Kupfer.

The latter is on until 23 October and is set inside the fictional food court of a failing shopping centre: in the middle of the exhibition stands a dilapidated juice bar built by Cole. Accompanying the juice bar are sculptures made by Dom, my previous studio mate and an artist I’m lucky to have exhibited alongside. Dom’s sculptures are always fantastically horrifying and these really don’t disappoint! My favourite is the two pale white diners made from paper clay, sitting naked, sharing an obscenely long sandwich. A must-see.

At home I take my hangover to bed with some mini Colin the Caterpillar cakes and a pint of fizzy water. I pop the telly on and get lulled by the choral tones of the Silent Witness theme tune and the squawking seagulls outside my window. It’s good to be home.

Lindsey Mendick is a Margate-based sculpture artist primarily working in ceramics. She runs Quench Gallery, with her partner Guy Oliver

Read all five of the diaries written by five different writers 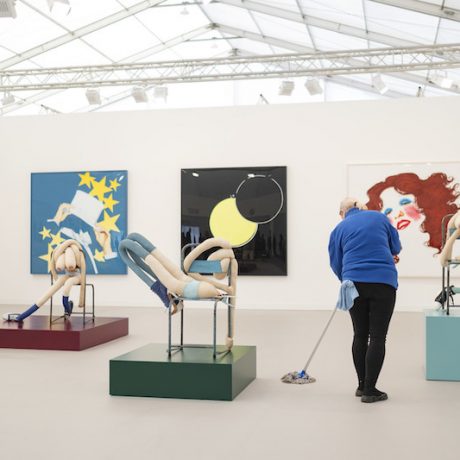