British sound and light artist Haroon Mirza has had a busy year. With his monumental installation Stone Circle (2018) materializing like some alien creature within the barren desertscape of Marfa, Texas this May, Mirza has since shifted gears from trippy full-moon rituals into the murky territory of fast fashion and bootleg culture. Exhibited for the first time in Mirza’s new exhibition at Ikon Gallery in Birmingham, Rules of Appropriation (2018) is a response to luxury fashion house LVMH’s recent appropriation of Mirza’s work under the guise of “tribute”. In line with Mirza’s continued interest in the mystical and the occult, fake Louis Vuitton bags appear to levitate off solar panels or twirl into oblivion atop record players, seemingly of their own volition.

At the launch of Reality Is Somehow What We Expect It to Be, Mirza’s most comprehensive UK exhibition to date, I spoke to the artist about intellectual copyright, cosmic residue, the limits of our conscious understanding and the politics of sensory experience—even getting some psychedelic pro-tips in the process.

What does post-authorship and authenticity mean to you in your practice?

For a long time I’ve not been into the idea of copyright—for my own selfish purposes but also ideologically, economically and politically. I have always struggled with the idea of intellectual property—that an idea can be owned. I agree that for images, to copy an exact image, there is an unfairness there—but ownership begins to break down even when considering the subject matter. Does a landscape belong to you just because you photograph it? What about the camera, did you create that too? Of course not. Most of what we engage with is an act of collective labour and consciousness.

It’s interesting to bring those questions into an art world context, like in your Louis Vuitton pieces, because it exposes how fragile the idea of intellectual property really is, particularly in today’s post-copyright culture…

Absolutely—it was really important to me that two of those works went to Frieze before they came here. Because in the end, a piece of art is the ultimate luxury object, and the art fair is the ultimate luxury warehouse. If there is anything LVMH does, it’s collecting luxury brands, in the same way that a collector might approach a fair. And when LVMH appropriates an artist’s work it is really just an exercise of power that says, we can take this and use it however we want. And when the artist is like, “What the fuck?”, they just offer to cover the cost of your next solo show and it’s a done deal. It looks like a collaborative association on paper but in reality it’s totally forced.

“It is really just an exercise of power that says, we can take this and use it however whatever we want”

These fashion houses have all the resources in place but they still don’t know how to actually foster a collaboration, and that probably says more about the impact of globalization and massive corporations than it does about copyright or intellectual property.

Can you talk a little about the role of technology in your practice?

I use technology as a means of engaging with the unknowable, rather than being afraid of what you don’t know. Not necessarily to know it, because that’s impossible, but to be open and receptive to engaging with it—whatever that is.

Sometimes the process is very technical, like in the series of seven electro-etches and spore prints on copper that is included in Reality Is Somehow What We Expect It to Be. I took a bunch of different types of psychedelic mushroom caps and cacti and placed them on top of the copper plates. They release spores to reproduce, and leave what is essentially a fingerprint on the plates. For others, I shot a positive charge on the copper plate and a negative charge through the mushroom or cactus, and it started etching into the plate, oxidizing and literally melting into it.

And what about your collaborative relationship with other artists—particularly the late Channa Horwitz, whose drawings appear in this show?

Collaboration is a large part of my practice, and comes from a point of admiration; rather than trying to recreate a good idea in a modified way, I think it is much more interesting and fruitful to ask the artist to collaborate.

Since Horwitz passed away in 2013 I have worked with her Estate and Lisson Gallery to get an intimate look at her work. She produced these incredibly precise mathematical drawings, or systems, really. Her work was largely ignored while she was alive—no doubt because she was a woman artist working in the machismo California minimalist scene—but she was such a fascinating figure, always trying to be like a machine. If there was ever a mistake or slightest inconsistency in her work it would be scrapped.

One of her most significant works was the Sonakinatography series that worked around linear progressions using the figure eight. When I discovered Horwitz, I was working on a sound piece using 8-channel systems, so it really seemed like fate. A Chamber for Channa Horwitz (2015) responds directly to Sonakinatography Composition III (1996), effectively “playing” the composition through light as well as sound.

There has been a lot of recent engagement in the art world with multisensory experience, and a broader recognition that vision shouldn’t be considered the master sense. What can sound do that optics cant?

Politically and ideologically, making things seen and heard simultaneously is a resistance to ocularcentrism—the idea of putting preference to what you see over the other senses. It is still quite a politicized thing to argue that the amount of weight given to what you see isn’t necessary; of understanding vision is only one part of our experience of the world and what we perceive as reality.

A work that pushes back against ocularcentrism also resists documentation and selfie culture. You can’t really reproduce a sound-based piece through imagery alone; the work is the experience you have in that place. So there is a resistance to digital reproduction and a little bit of social media as well—I mean, people are still gonna selfie, they’ll always find a way around it. Actually, people have been trying to document my work with virtual reality and it doesn’t really work—unless you have a total simulation with a surround sound system, you can’t get close. But I think what would be way more interesting is to use VR to simulate a psychedelic experience.

“People are still gonna selfie, they’ll always find a way around it”

Finally, following your research into psychedelic rituals, what is your hallucinogen of choice, and preferred location?

I would say endogynous DMT, so DMT that is naturally produced within the body. I would take it around people I trust—I mean, a dramatic desert or forest would be good, but it’s more important for me to be with friends—or by myself. I trust myself… I think.

Haroon Mirza: Reality Is Somehow What We Expect It to Be 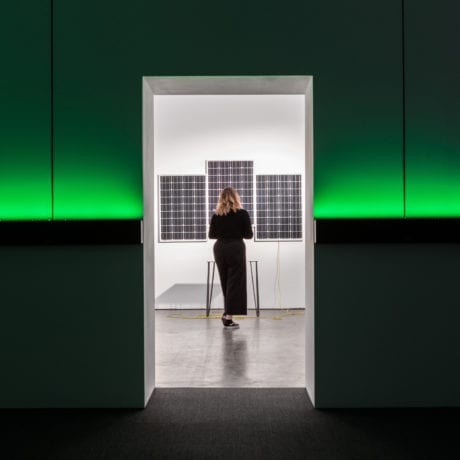