Helen Cammock’s “almost” story precedes her: the last two years have seen the artist’s phenomenal rise after the forty-nine-year-old swapped her career as a social worker to pursue her calling as a “visual poet”. Re-training at the Royal College of Art, Cammock went on the win the Max Mara Art Prize for Women in 2018, which led to a year travelling around Italy, gathering material for the exhibition she presented at the Whitechapel in June, Che Si Può Fare. Cammock’s film, The Long Note, is now up for the 2019 Turner Prize, to be announced in Margate in December.

She recently brought Che Si Può Fare back to Italy, to present it at Collezione Maramotti in Reggio Emilia (located in the former manufacturer’s space for Max Mara). At her opening in the European country last month, Cammock proved that she still has the instincts and impulses of a musician: a Jazz trumpeter performed a duet with Cammock, and a group of women she had met from Reggio joined a highly emotive and intuitive performance. Music for Cammock joins the past and present; it brings forgotten figures vividly to life and empowers the marginalized. I talked to the artist about her methods and what we might learn by singing what we feel.

The whole idea behind the performance was this idea of dialogue—so in the Barbara Strozzi aria Che Si Può Fare, I wanted there to be a duet with a jazz trumpet. I was interested in this genre because I can hear jazz and blues in both the Strozzi and Caccini pieces that made up the two parts of the performance, and I wanted to include a trumpet specifically because the instrument features in one of the stories in the film Chorus I, in which musical nuns were banned from playing trumpets by the Pope because it was deemed unseemly. Blues and jazz can be heard in both pieces of music, and for me, the structure, chord progressions and potential for blue notes in both led me to want to bring this sound directly into the duet. So, in London I duetted with jazz improviser Sheila Maurice-Gray, and in Reggio Emilia with trumpeter and singer Paola Fecarotta. These duets enabled me to embody the piece—sing as I felt it—with different musical gesture and historical resonance.

And how did you meet and include the women performers who also took part in that performance?

The second part of the performance was a collective movement piece to Francesca Caccini’s Ciaccona. I worked with Becky Warnock and choreographer Federica Parretti on workshops with a group of women from Reggio Emilia. Some I had previously worked with on my residency as part of a project that incorporated photography and text. These women have already contributed their stories of loss, longing, resistance and reliance and they have their own section in the book that accompanies both exhibitions. However, for the performance, women responded to an open call through a large community support organization in Reggio Emilia as well as a smaller support project. Some women were born in Italy and others were newer to living in Italy—so first and second generational migration was part of their stories. The movements in the performance were based on gestures that represented the women’s individual and collective stories as well as Baroque group dance gestures.

As part of the research and process for Che Si Può Fare, you had singing lessons. Was singing something you were already good at, or interested in, and how did your singing teacher in Italy shape your voice and your relationship to singing?

Although I had no ambitions to become a classical singer—the project was about the embodiment of the sound of Strozzi—I wanted to be able to sing what is actually a very complicated aria for someone who has never had a singing lesson before and I realized that in order to do this I needed some help. As an artist I use song in my spoken and sung word performances. I sang in bands in my twenties, and as a teenager I used to sing with my guitar as a warm-up act in clubs. So singing was always part of my life until I stopped singing at about age thirty. I was persuaded in 2016 to reintroduce my singing voice into my work as an artist and now it features in both my film scripts and my performance. I had some singing lessons in Italy and then some more in the UK. Both teachers enabled me to find my sound in my own body and work with it as an instrument. I’ve begun to understand how air fills my body, travels from one area to another, and to feel the mechanisms inside me that create my sound. I will continue with lessons. It’s good to be in a process of learning and development.

Why did you present the film as a split-screen installation, and was that something you decided early on?

The split-screen says something about how I began to see the world I found myself in—moving between cities, histories, relationships and encounters. I filmed everything on an iPhone and my Canon 5D, and very quickly I began to feel that I wanted to make a work that somehow shared the inter-sections and conversations across time and place, thread lines of experience, of politics, of oppression, of pain and of strength. And the split-screen made sense. I’ve made a dual-screen film work before but it was the first time for a three-screen.

“The media attention has been quite a shock—some good, some bad”

This year has been quite an amazing breakthrough for you. Did you expect it, and how have you dealt with finding yourself suddenly in the spotlight? And what’s next for you?

I didn’t expect any of the acknowledgments, recognition and attention that I’ve experienced this year. It has been a strange experience that people have become so interested in what I’m doing. I have really enjoyed developing bigger shows, having larger platforms to show my work and working with a number of interesting curators. The media attention has been quite a shock—some good, some bad. It has been a shift from living a private life to suddenly feeling like I also have a public one.

I guess I will be waiting for the Turner Prize announcement in December and I also have three new projects which are about to start: a new film commission Concrete Feathers and Porcelain Tacks, with Film and Video Umbrella and Touchstones Gallery; a project called Radio Ballads with Serpentine Galleries; and a residency and commission with Wysing Art Centre. I’m also going to try to have a little bit of a rest because the last couple of years have been non-stop—at least, I’d like to understand what a weekend is again…

Until 16 February at Collezione Maramotti, Rome 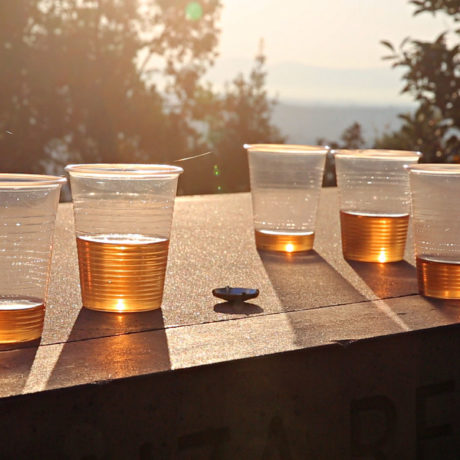