It seems only natural that a cartoon that stands out for many as the defining TV show of the 1990s would have more than a few thoughts to offer about television itself. Last year, The Simpsons became the longest-running primetime scripted series in the United States. While the show continues to broadcast new episodes, it is best known for its dissection and dominance of popular culture during the nineties, when guest stars featured everyone from John Waters to Art Spiegelman.

The Simpsons has often been prescient in its satirical predictions for America, even going so far as to feature Trump as President in 2000’s Bart to the Future, sixteen years before it came to be. But it was in Homer Badman, 1994, that they first began to peel away at the skin of populist politics, modern media and even sexual harassment.

The episode starts innocently enough, with Homer attending a candy convention—”I feel like a kid in some kind of store”—where he finds a prized gummy Venus de Milo. Later, after driving the babysitter home, he sees that it has become stuck to her behind as she gets out of the car. He snatches the iconic artwork from her, and in doing so executes an accidental ass-grab—an accident that seems plausible only within the confines of a cartoon.

His mistake quickly balloons into a protest on the Simpsons’ front lawn, where demonstrators brandish signs that read “YOU PINCH WE LYNCH” and “HANDS OFF”. “You grabbed me in the car!” shouts Ashley, the babysitter and grad student, who once gave a talk at Lisa’s school “on how women don’t have to be second-class citizens.”

“Oh, that. No, I was just grabbing a gummy Venus de Milo that got stuck to your pants,” Homer laughs. “Yeah, right,” a protestor responds. “That’s the oldest excuse in the book.” So far, so Me Too moment, but just how accurate is this confrontation? Convictions for rape and sexual harassment are at an all time low, even as the rate of accusations continues to rise. The spectre of Trump looms large, with his “grab ‘em by the pussy” mantra, while many others who have been accused retain their wide-reaching influence.

“The spectre of Trump looms large, with his ‘grab ‘em by the pussy’ mantra”

In The Simpsons, the media circus around Homer quickly escalates, and it’s not long before every television channel is weighing in on the accusations. One channel plays out a dramatization of the event, a spoof on the bias of crime reconstruction shows. In it, the actress playing Ashley promises to yell so loud the whole country will hear of her harassment. “With a man in the White House?” Homer’s counterpart responds, laughing. “Not likely!” Little could the writers have known exactly which man would be in the White House today.

Television consumes the case. It foreshadows the public shaming of the digital age, while also harking back to an era of talkshow hosts and newsreaders that already feels nostalgic. Today, television ratings are falling, and falling fast. Traditional news cycles have been disrupted by social media, and broadcasting has shifted into the hands of the people.

In this bygone era, Homer makes an ill-judged appearance on “Rock Bottom”, an aptly-named chat show where exposé and petty scandal make for entertainment. “She was a university honour student who devoted her life to kids, until the night a grossly-overweight pervert named Homer Simpson gave her a crash course in depravity,” the show’s opener growls over paparazzi footage of Homer, before announcing him as “Babysitter and the Beast”. 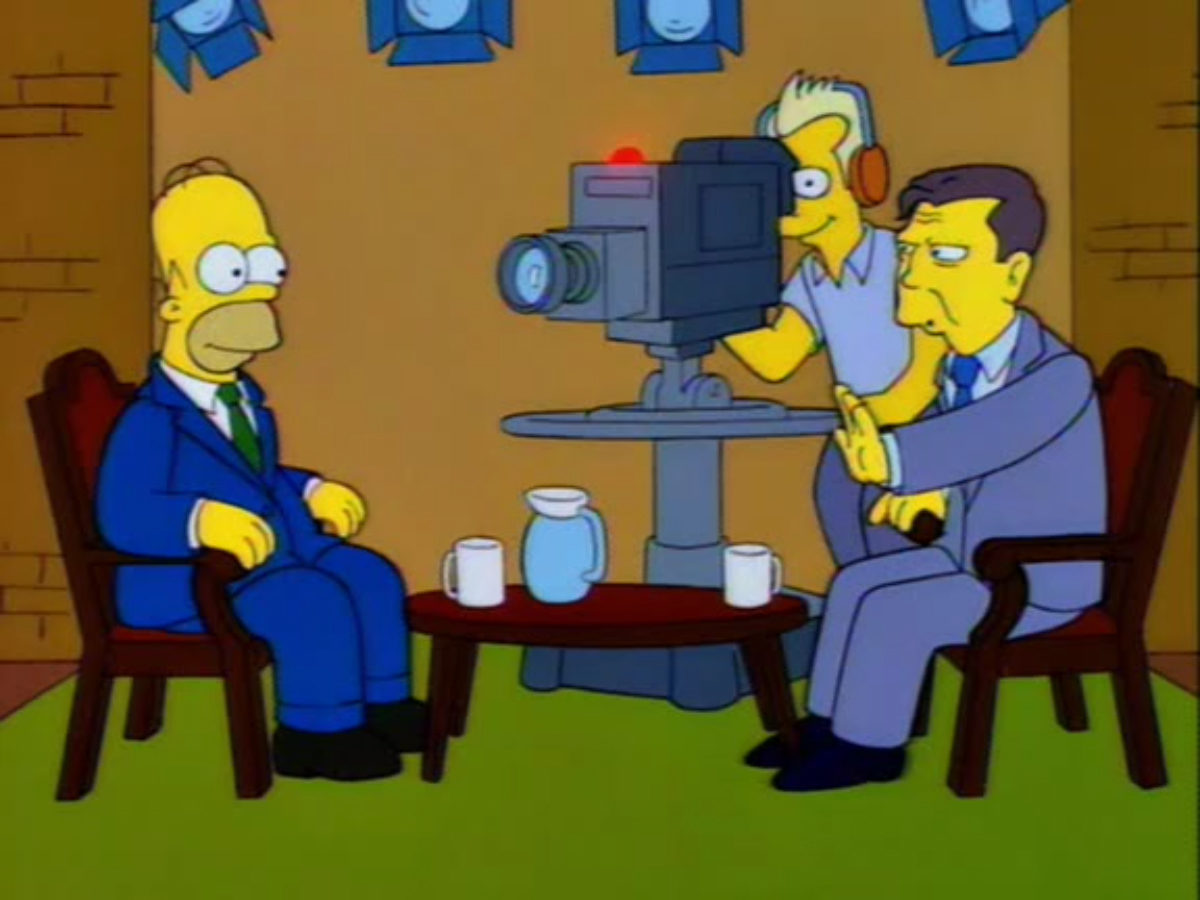 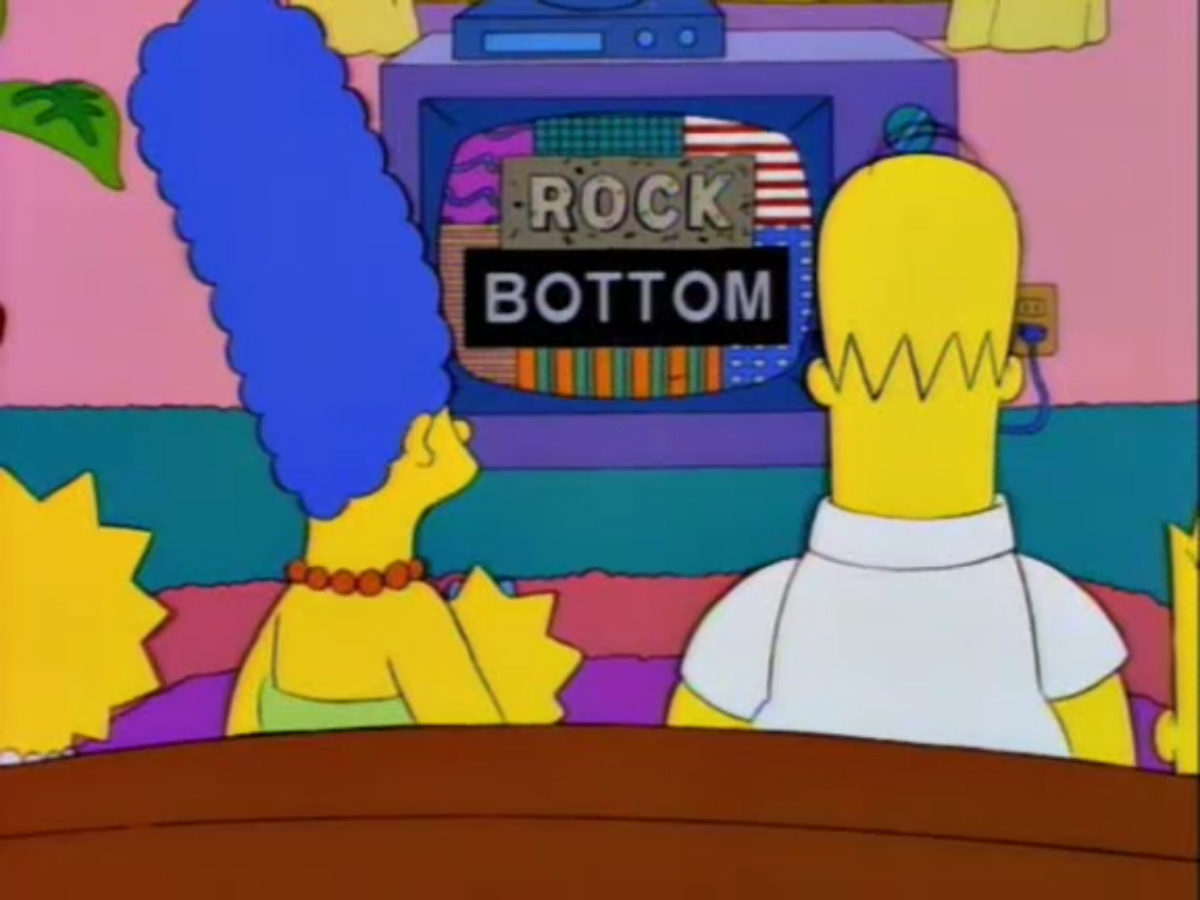 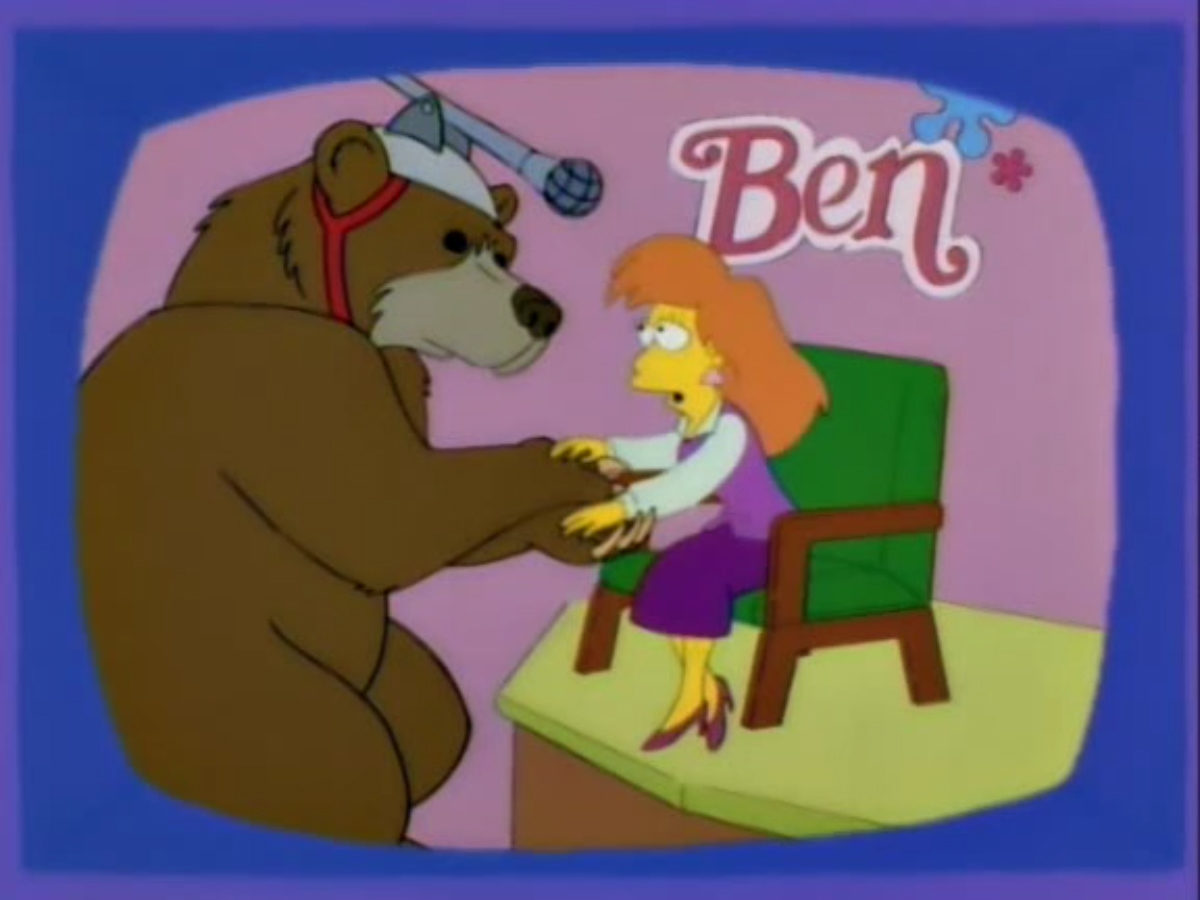 Talkshows, including one that is hosted by Ben, who happens to be a full-sized grizzly bear, are quick to get in on the action, too. Following the cancellation of the Jeremy Kyle show in the UK earlier this year, a show notorious for the baiting of its guests, it’s not difficult to see the sly inversion that the show’s writer’s are making here with Ben the bear. A woman weeps uncontrollably on another channel: “I don’t know Homer Simpson, I never met Homer Simpson or had any contact with him, but… I’m sorry, I can’t go on.” “That’s okay,” the host reassures her. “Your tears say more than real evidence ever could.

It is a spectacle reminiscent of Sidney Lumet’s 1976 film Network, about a fictional television network and its struggle with poor ratings, in which newsreader Howard Beale proclaims, “Television is not the truth! Television is a God-damned amusement park!” Joker, the recent Todd Phillips movie that tells the tale of Batman’s most famous nemesis, also trains its sights on the compelling, and highly damaging, impacts of television. Robert de Niro stars as smarmy talkshow host Murray Franklin, with ruinous effect on the film’s obsessive protagonist.

“Television consumes the case, and foreshadows the public shaming of the digital age”

“They’re ruining my whole life”, Homer wails, as he lies alone in his bedroom, surrounded by empty pizza boxes and dirty underwear, flicking from channel to channel. Meanwhile, Bart and Lisa struggle to retain their conviction in their father’s innocence. “Sorry, Dad, we do believe in you, we really do,” Lisa mumbles. “It’s just hard not to listen to TV: it’s spent so much more time raising us than you have,” admits Bart. “Oh, maybe TV is right,” Homer sighs. “TV’s always right!”

It’s a difficult line to tread, at a time when the uneven power dynamics between the sexes is under scrutiny. The ongoing case of Harvey Weinstein cannot be ignored, and it is difficult to imagine that accusations of sexual harassment would have been made light of in quite the same way had this imbalance of power not been so entrenched when the episode aired in the mid-nineties. Homer is shown as a victim, with little focus given to the effects of the case on his accuser.

There is some irony in the fact that Homer’s case is finally resolved by a secretly recorded tape of the incident, which clears him of all wrongdoing; lest we forget, it was a secret tape that incriminated Trump in the pussy-grabbing incident. Homer is shown innocently reaching for the miniature gummy Venus de Milo, a reminder of the beguiling work of art that started it all.

Unsurprisingly, the iconic statue is a representation of a topless woman—a hint at the easy objectification and casual misogyny that is as old as art history itself. As Homer puts it when he first misplaces the gummy artwork, “Don’t panic, she can’t have gotten far. She has no arms.”