It’s a paradox that defines our times: we love to hate consuming. We politicize everything from a cup of coffee to new shoes while continuing to click our carts and buy. We love to eat healthily and fly cheap—knowing these new consumerist goals are hashtagging our way to an apocalypse.

Tiffany Zabludowicz has grown up in the art world, the daughter of billionaire collectors Poju and Anita, owners of the Zabludowicz Collection and in possession of some 4,000 works of art. At the age of twenty-six, she has also grown up in our contradictory consumer culture. The young Zabludowicz has curated World Receiver, a new exhibition in London at the home of the family’s collection featuring fourteen young artists—her peers—in dialogue with two older artists who understand consumer culture well; Isa Genzken and Cindy Sherman.

Each of the artists present explores ideas around consuming and materiality, and how each might affect our sense of who we are. So who are you: an Anna Uddenberg—a hyper-flexible, ultra-yummy mummy wearing Lululemon yoga leggings? Or are you more of a Kevin Beasley, a messy heap of vintage clothing and dirty dishes, that reverberates to the soundtrack of The Notorious B.I.G? Perhaps you identify with Chloe Wise’s fashion-friendly, cutesy gluttony, piles of pancakes dripping in syrup and Louis Vuitton crocs?

All of the artists in this exhibition—and perhaps Zabludowicz too, being part of a collecting dynasty—like material things. But they are also repulsed by them, or at least by what those things compel each of us to do. The question is left to the viewer: how materialistic are you? Eight of the artists included in the exhibition might help you find the answer.

Readymades for the Insta-age: meet Puppies Puppies, whose objects and actions are appropriated straight from consumer platforms like Etsy and eBay. She also performed a protest dressed as Spongebob at Material Art Fair back in 2015. Shrek and Voldemort have also appeared in works. While most artists claim their work doesn’t bear the imprint, Puppies Puppies does the opposite: revealing, openly psychological work attached to an anonymous identity. Toilets are a frequent feature, too. “Life is complicated, but we do sleep a fair amount, eat a fair amount, and shit and piss a fair amount. Boiling things down to these simple gestures make you realize how important something like the bathroom is in the scheme of life”, the artist said in a 2016 interview.

Ryan Trecartin’s work might give you a headache. The deliberately disorienting whirl of sounds, perspectives and colours in his films are consumerism regurgitated. Born in 1981—a borderline millennial—Trecartin’s award-winning manic creations are often made with Lizzie Fitch, his frequent collaborator. The frenzied, furious madness he presents resonates with a generation who are vexed and perplexed, eyes locked to screens.

The Canadian artist Chloe Wise, age twenty-nine, is just as likely to paint a Louis Vuitton bag as she is to attend a fashion party, which makes it hard to know if she’s a critic or complicit, but that’s standard these days. Her food sculptures and portrait paintings are carefully chosen, things she admires and adores, that are commonly frowned upon or highly regulated, lower down the food chain of consumer culture: carbs and milk, for example, which Wise equates with both comfort and fear. She is the perfect painter of contradictions and confusion, and she satirizes this in her work. “A lot of the humour is a millennial humour.” She told Elephant in an interview in 2016. “It’s very self-reflexive: the epitome of internet-style humour.”

Beasley is a sculptor, primarily, but he is also a DJ who studied automotive design. The very fact he mashes up genres and mixes materiality with the intangible make him the perfect artist of our day. The surfaces of his works are something to be traveled; embedded with metaphor and meaning, Beasley has used consumer products and items to talk about race, class and history: he’s known for installing a one-tonne cotton gin motor in the Whitney for his recent solo exhibition.

At seventy, the highly influential and radical conceptualist Isa Genzken is the oldest artist in World Receivers, and she grew up in a very different context, in post-Nazi Germany. Openly self-critical and often dissatisfied with the society she sees, situations collide with structures in Genzken’s ever-changing practice. Whether it’s through vampires or cowboy boots, or luggage printed with pictures of kittens, Genzken keeps reinventing herself, but her commentary on culture remains both humorous and deeply disturbing.

Another artist who has worked with luggage is Anna Uddenberg, whose persistent concern is the ways in which femininity is prescribed and marketed to us in the west, considering the relationship between female bodies, sexuality and capitalism. At the last Berlin Biennale, she installed an army of globetrotters consumed by their carry-ons. At World Receivers, she presents two pivotal works on the physical form of femininity that’s sold to us by branding and mass media. Taking the consumer idea of how women should be and stretching it into the absurd, Uddenberg’s mannequin figures are the unlikeable outcomes of capitalism.

Born in 1993 and graduating from the RA Schools MA last year, Issy Wood is in a prime position to look at the moment and revel in all the contradictions of material gain: this discussion often comes out through her preference for luxurious materials like velvet. Ideas on materiality are concise in a series of paintings of the Joan Rivers; a figure who symbolises tacky excess and extravagance, all plastic surgery and showbiz, but who is also tragic and empathetic. We consume all these things, but ultimately they consume us.

From 21 March to 7 July at Zabludowicz Collection, London 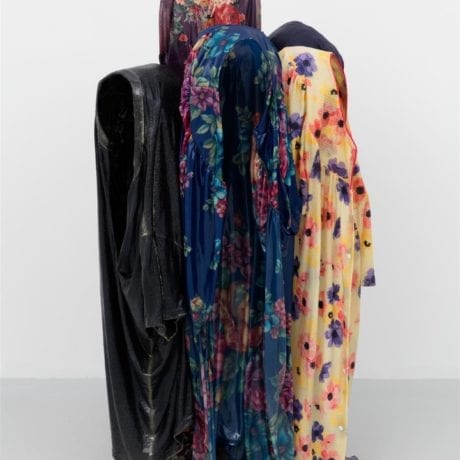