It was on the fourth day into our new life in Ireland’s south that the ten-year-old me understood it for what it would be. Or rather, understood my location within it all: towards the edge, quiet, and internal.

I was born in Coventry to Irish parents who had always dreamed of moving back ‘home’. This was the early 2000s, when the allure of the Celtic Tiger (and the subprime mortgages this economic period proffered onto buyers) was causing many second-generation families to contemplate similar returns. So off we went, my two brothers and I, along with my mother, and four years later my father, on the ferry from Holyhead to Dún Laoghaire.

I was an acutely shy child who barely spoke publicly, which largely stemmed from having a huge overbite and teeth that angled outwards at an almost 90ºangle. Speaking revealed the deformity, hiding behind my right hand tacitly concealed it.

“I totally abnegated my Irish identity, burying the memories entangled within that sense of self”

On my first day at school, I was introduced by the teacher simply as “the wee English girl”. Shortly after, one of my classmates informed me that the English had taken enough off Irish people in the last 600 years so I’d better not have the audacity to steal his seat from him. He was 11 years old, and I hadn’t a clue what he was talking about.

Today, I am acutely aware that he was correct: the political elite in England had extracted extortionate and incomprehensible amounts from Irish communities over the past several centuries. British powers had seized land from largely Catholic farmers, which led in turn to The Great Famine and a significant loss of life. The cartographic line that ran near the border town where we moved in County Donegal is viewed by many as the ‘divide and rule’ that the British Government instigated in Ireland, setting Catholic communities in direct opposition to  Protestants.

But despite growing up in England, I had never considered myself to be actually English. My family were part of a close-knit working class diaspora community who practiced Irish culture so ardently (drinking Guinness, roaring rapturously at Trad nights) that I’d always felt bound to that identity. Now I was confronted with an outsider status, referred to as ‘the English girl’ and forced to grapple with the destabilising force of having my identity rejected.

At my first opportunity, I left County Donegal to study, seeking out a new life back in the UK where I could construct a neutral identity. I had not absorbed an accent. It wasn’t long before I totally abnegated my Irish identity, burying the memories entangled within that sense of self. I floated through life never quite knowing where I was really from.

“I was confronted with an outsider status, referred to as ‘the English girl’ and forced to grapple with having my identity rejected”

It wasn’t until several years later that I returned to Ireland to take up a teaching role. I was hesitant, unsure about how it would feel to return to the place I grew up in. One day after teaching, I travelled south and entered a gallery showing an exhibition that set out to explore global borders and national boundaries through the work of international artists.

Walking into the gallery, I was confronted with an unostentatious photograph depicting a car that has seemingly been bombed and abandoned on a rural roadside. Titled Border Incident, I learned it was created by the photographer Willie Doherty in 1994.

As I gazed at it, I realised that the site of the incident referred to in the photograph’s title was a place I had driven through with my family almost weekly when growing up in Ireland. Soon after we moved to Donegal the Great Recession hit. It became common practice to drive across the border into Northern Ireland to ashamedly buy groceries and petrol in avoidance of the inflating prices in the South.

At the time the image was captured, The Troubles were tearing apart communities. I reflected on this violent history, one that loomed so heavily that a child as young as 11 could associate an English accent with five centuries of colonial violence. With its depiction of lush green pastures and rugged landscapes against the remnants of crisis, Doherty’s photograph was able to contain the often contradictory memories of my adolescence.

Although the image is devoid of people, the photographic paper was so glossy that I found I could see my own reflection in its centre. The emptiness of the scene was charged with narrative potential: an event, or incident, has happened in the past yet abandoned.

“It reminded me of how much I really knew of this place, how much it knew me, yet how I had left it behind. Finally, I felt a sense of recognition”

It reminded me of how much I really knew of this place, how much it knew me, yet how I had left it behind. Finally, I felt a sense of recognition. Border Incident became a way into addressing a part of my history that I’d abandoned. It allowed me to traverse a border that I had constructed between myself and my past.

I now understand that our existence is bordered and fractured in multifarious ways. This encounter became a confrontation with a version of myself that I had left behind. I revisited that child on her fourth day at school, and pulled the hand away from her mouth.

Maria McLintock is a curator at the Design Museum. She lectures on architecture and design at University of the Arts London and University of Limerick 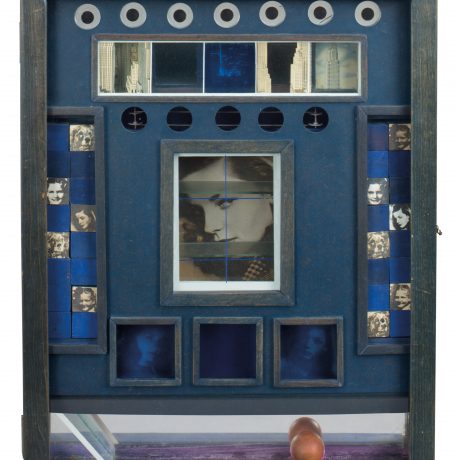