In The Book of the Damned, Charles Fort wrote of a place where lost things gather. He called it the Super-Sargasso Sea, a dimension full of “derelicts, rubbish, old cargoes from inter-planetary wrecks; things cast out into what is called space by convulsions of other planets, things from the times of the Alexanders, Caesars and Napoleons of Mars and Jupiter and Neptune; things raised by this earth’s cyclones: horses and barns and elephants and flies and dodoes, moas, and pterodactyls…”

I don’t know where this is located but I know of its existence, having grown up in one of its outposts on earth. When I was a child, my mother used to say our house was like the Bermuda Triangle, given we were constantly losing things within it. Our two-up two-down terraced home was modest, though, and lacked the space for anything to truly vanish into. The reason objects seemed to disappear was because the house was inundated with lost things. It was more Super-Sargasso Sea than Bermuda Triangle.

What differentiates a collector from a hoarder? Is it when collecting infringes on daily life? When the objects become master rather than servant? When utility or monetary value are no longer the driving concerns?

“What differentiates a collector from a hoarder? Is it when collecting infringes on daily life? When the objects become master rather than servant?”

The objects my father brought home (gas masks, clay bottles, sailors’ instruments) were fascinating, which is why it took me so long to recognise that there was something amiss. I’d always assumed he’d dug them up in his job as a gardener for the council in the cemetery and parks. I realise now he had also acquired them from flea markets and antiques shops, places where he seemed at home.

Given the austerity of those times, when we were living in an inner-city working-class area during the Troubles, every item he brought back was infused with magic. My parents were out the day that changed. Retrieving a ball from the shed, I was almost trapped under an avalanche of objects. All my illusions of my father as some Indiana Jones-style treasure-hunter collapsed. The objects themselves still contained stories but no longer ones I wanted to discover.

My father was a distant quiet man at home but charismatic and open publicly. For a long time, I struggled with that distance. The items he gathered seemed part of the problem, a vast icefall of junk between us. He had been a bodybuilder and remained formidable but, with injuries and age, began to slow and, as he did so, his interiority and his compulsion to collect deepened.

“Through Cornell, I have realised how much I was projecting onto my father and I felt shame at my ingratitude”

Every single morning, a knock at the door brought packages with cyrillic or hanzi script that I would shake to try and identify before they took their place in the Super-Sargasso Sea. Looking back, I spent a long time living in reaction to that impulse, whether in taste (a preference for Bauhaus-style minimalism) or lifestyle (owning little more than could fit in a suitcase).

Discovering American artist Joseph Cornell’s boxes was a revelation. At first, they were mysterious: odd little penny arcades, puppet theatres or miniature stage sets. Like any real revelation, it was unwanted but gradually, the content of the boxes began to play on my mind: star charts, renaissance slot machines, princes, ballerinas and explorers, the rooms of forgotten European hotels, shrines to screen sirens, Emily Dickinson’s bedroom, broken hourglasses, and birds, aviaries, dovecotes and cages.

They were self-contained worlds in which the spirit of bygone eras had been trapped. Or they were toys you played with as a child that were actually repurposed items from an adult world you didn’t yet understand. Talismans you could base a new religion around. They made me ask “why?” and gave no answer.

“Cornell’s boxes were self-contained worlds in which the spirit of bygone eras had been trapped. They made me ask ‘why?’ and gave no answer”

My father and Cornell were very different, yet they shared not just an obsession with objects but also certain themes: wonder and scarcity, confinement and reverie. The more I looked at Cornell’s boxes, the more I thought of the origin of my father’s compulsion to collect. The obvious answer was his youth, growing up in abject poverty in a derelict army base turned squat then spending his teenage years in prison. The objects spoke of deprivation and a fear it might return. Or they may have been the reliquary of a lapsed Catholic.

Sometimes there was something subversive in them, a dreamcatcher or a Green Man placed where a holy water font or a portrait of the Queen might have been. Perhaps consumerism permeated him as much as the rest of us, and he succumbed to that manufactured insatiable desire that if only we could own more, we could finally feel complete. Or perhaps it was darker; ballast in the unstable world he grew up in, an attempt through the acquisition of relics to return to an age before everything had changed.

I spent a week sifting through my father’s possession after his recent death, following a long and brutal battle with Covid-19. My thoughts kept returning to Cornell’s aviary boxes, and a story I’d been told of how my father, then a little boy, was tending to his pigeons in their coop when a British army detachment drove by and shot at him, only narrowly missing.

“Cornell’s ‘dream machines’ or ‘memory boxes’ are riddles without a definitive solution. Therein lies their possibility, and the power of all true art”

His older brother had been interned shortly afterwards. One of the last things my dad told me was that this event initiated a downward spiral that destroyed everything he held dear and resulted, he felt, in his mother’s suicide years later. I kept thinking of those birds in Cornell’s boxes and, once my anger subsided, I felt nothing but love and pity for that little boy.

“We see things not as they are but as we are,” Anaïs Nin wrote. Through Cornell, I have realised how much I was projecting onto my father and I felt shame at my ingratitude. I see how alike we may have been and how insightful the words of a former love were when she said, “You are a collector too, just not of objects.” And, now that my dad is gone and has become even more unknowable, I am learning to accept the unknowing.

There are stories to be found in every object (the verb ‘to horde’ is derived from ‘hidden treasure’) but that doesn’t mean there is a singular meaning. The ‘dream machines’ or ‘memory boxes’ of Cornell are riddles without a definitive solution. Therein lies their possibility, and the power of all true art. They remind us that it’s ok and humane to be uncertain. Rothko once wrote to Cornell, “I think of you and the uncanny magic of the things you make.” I think the same of my dad, even though I can no longer write to him.

Darran Anderson is an Irish writer based in London. He is the author of Inventory, shortlisted for the PEN Ackerley Prize, and Imaginary Cities 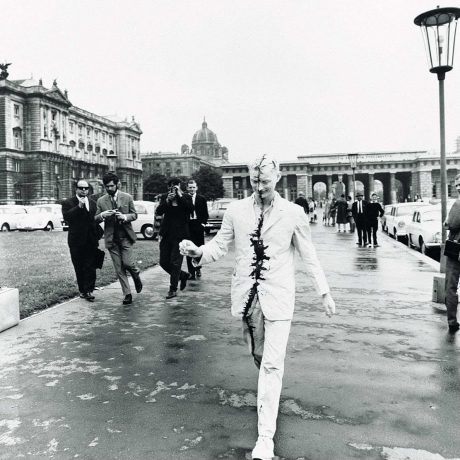