As we approach the end of what’s been a highly irregular year, much of the arts sector remains in limbo. In the UK at least, it’s uncertain what can and can’t open and when. A startlingly optimistic counterpoint to all this is the NGV (National Gallery of Victoria) Triennial, which is set to open as planned in Melbourne, Australia, on 19 December. This year’s show is the difficult second album for the NGV Triennial, which launched in 2017 and set out its aims to commission projects that demonstrate the intersection between contemporary art, design and architecture; and in doing so, establish and reinforce connections between Melbourne and the global art community.

Though they were no doubt chosen well before Covid kicked in, the themes of the Triennial feel eerily relevant for the moment the world has found itself in: “illumination, reflection, conservation, and speculation” are among the ideas underpinning the 100 or so works from international contemporary artists, designers, and architects. Emerging practitioners nestle next to long-established starry names such as Jeff Koons, Julian Opie, Cerith Wyn Evans, JR and Daniel Arsham; as well as photographer Bruce Gilden, best known for his grotesquely unflinching close-up portraits. NGV has also drawn in a number of design world veterans such as Faye Toogood, Kengo Kuma and Patricia Urquiola; and there are also a couple of Elephant favourites such as Johannesburg-based photographer Phumzile Khanyile.

“New systems, materials and technologies are rapidly changing the ways in which artists and designers can imagine and speculate on the future”

Those few names alone hint at the breadth of the work on show in the Triennial, from performance to sculpture, painting, installation, architecture, product design, photography and more. Some of these take the form of new commissions and recent works, others are older pieces; the vast scope of practices, career-lengths, geographic locations and as such, perspectives, work together to form a body of work which seeks to “question the status-quo of the art and design world through the generation of collaborative projects with positive impacts and long-term legacies,” says the NGV Triennial team.

They add that the new commissions in particular look to demonstrate that creativity is about more than being “aesthetically compelling”—that art and design should also be “socially” valuable, too: “As creative disciplines become increasingly porous and interconnected, new systems, materials and technologies are rapidly changing the ways in which artists and designers can imagine and speculate on the future.”

The Triennial offers a great avenue of discovery for artists like Ethiopia-born, Melbourne-based photographer Atong Atem. Her photography and video works explore how such media can express culture and identity, delineating migrant stories and postcolonial practices in the African diaspora. She uses paint to enhance many of her photographs, with bright colours and bold patterns inspired by her South Sudanese background. Five of her 2015 works are featured in the triennial, all of which take the personal experiences of Atem and her friends and use them to highlight the history of studio portraiture artists in Africa, such as 1960s Malian photographers Malick Sidibe and Seydou Keita.

South African photographer Phumzile Khanyile’s work also looks at ideas around identity, this time with a focus on the fissures between expectations around how women should express sexuality and social stigmas in doing so. “I explore beyond the tragic boundaries of what my grandmother would consider a ‘good woman’, probing stereotypical ideas of gender, sexual preference and related stigmas and their relevance in contemporary society,” Khanyile says of her 2016 series, Plastic Crowns. “I am interested in how having multiple partners can be an expression of choice as opposed to it being an indicator of low morality, based on social conventions. This body of work is a journey of self-discovery.”

Among the other highlights are American artist Diamond Stingily, whose installation-based works also address identity, this time through the prism of its materiality and myth. Her NGV piece was informed by her upbringing in a  family of athletes (two of her brothers play in the NFL), using more than 700 athletic trophies to discuss ideas around competition, triumph and failure. Elsewhere, London-based artist and designer Alice Potts has worked with sustainable textiles such as bioplastics to create a set of speculative PPE face masks made from food waste and dyed using flowers gathered from London parks during lockdown. 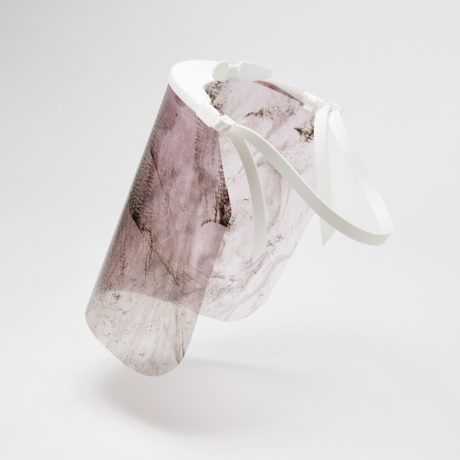