When I leave Imran Perretta on a Wednesday evening in the New Wing of Somerset House, I am thinking about his response to the question of working with arts institutions. How he navigates that mixture of pomp and expense, and how he remains autonomous despite it.

“I don’t pay too much attention to institutional struggles in the art world because it’s just myopic,” he said. “I’m worried about getting stopped and searched. I’m worried about being stripped naked at an airport. I don’t give a shit if some curator says some bullshit to me.” It seemed to summarise the conversation we’d had—insightful and defiant and funny; deflating the question to answer it from another angle. 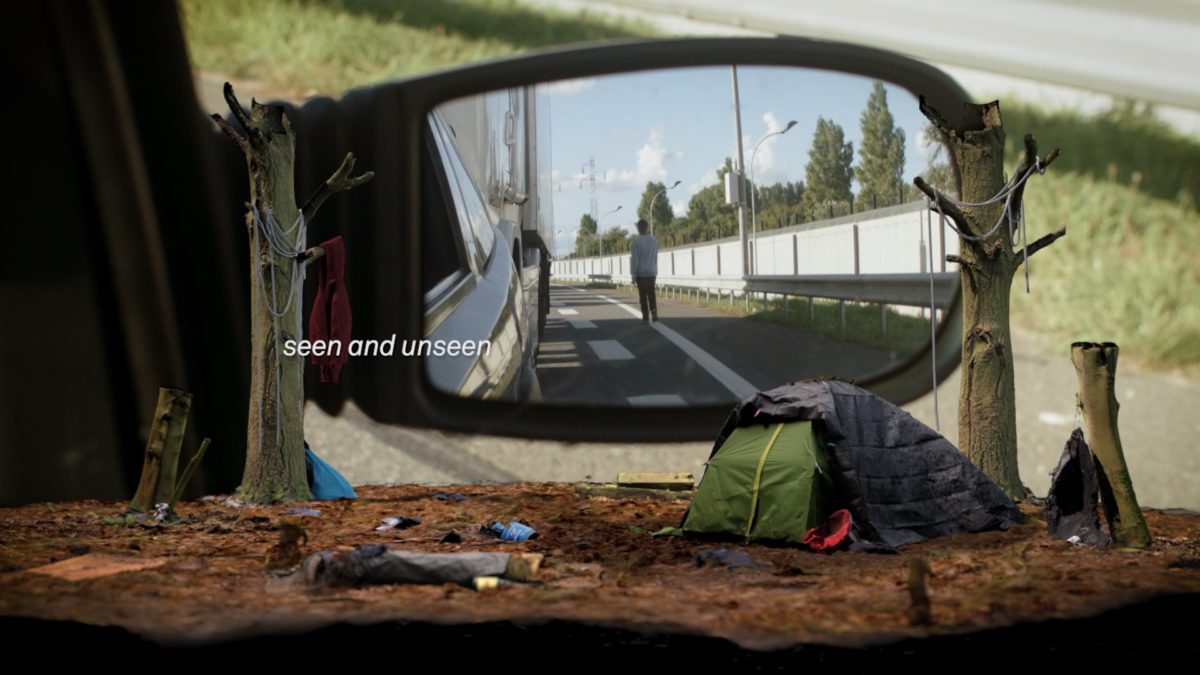 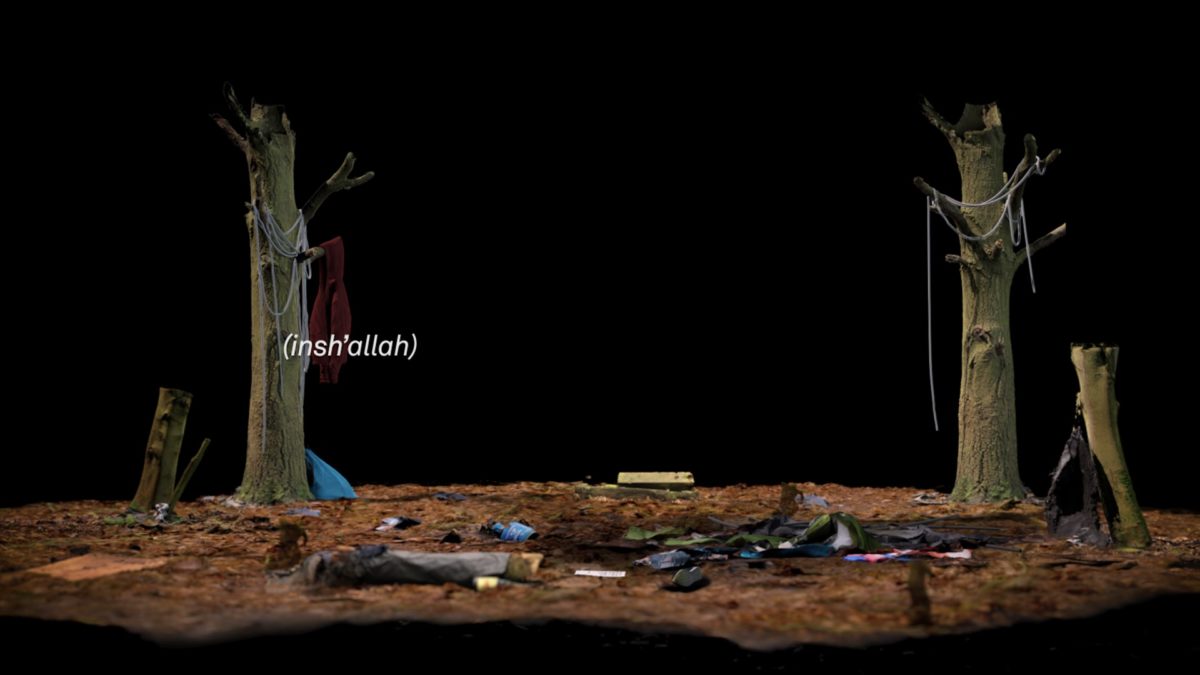 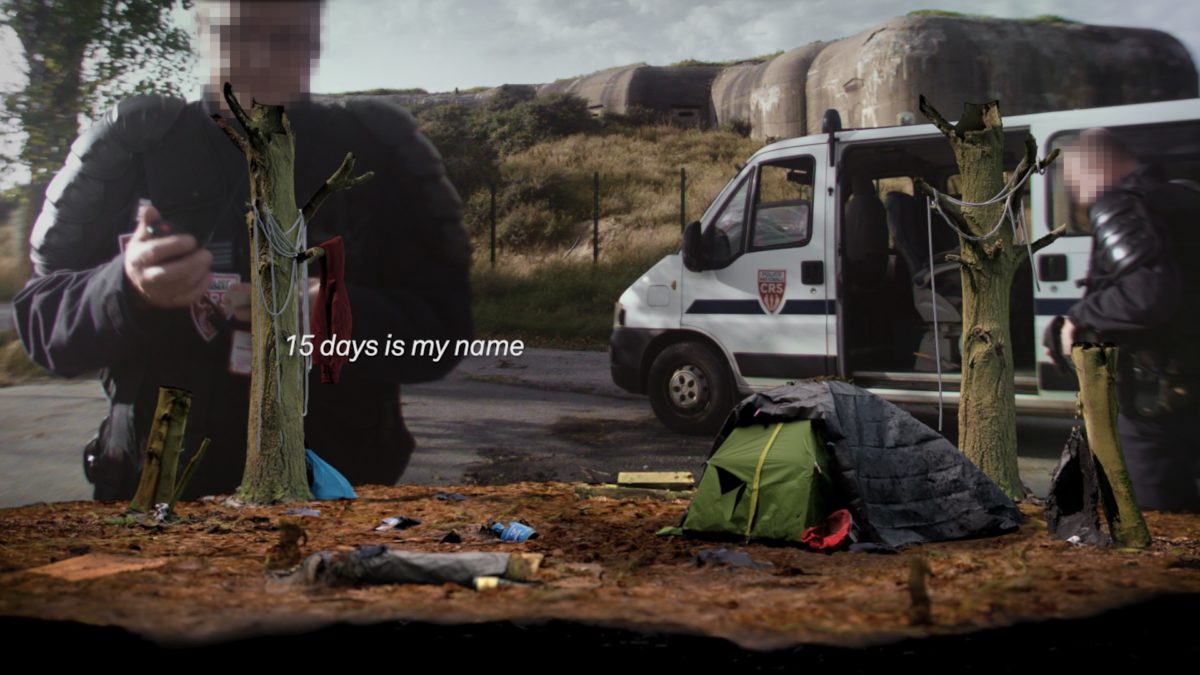 After the release of Brother to Brother, which deals with being detained at an airport, and 15 Days, an account of living in a refugee camp near Calais, critics couldn’t help but comment on the politics of Perretta’s work. Does he agree? “What I do will always be overtly political, because this is the body that I inhabit, in a world that has told me repeatedly that it doesn’t want me”, he explains. “So in that sense, just persisting is kind of a radical subject position. Anything that comes from me is imbued with this political narrative, because it is my own personal narrative.”

“I’m worried about being stripped naked at an airport. I don’t give a shit if some curator says some bullshit to me”

And how do his films communicate that? “Being able to layer the images, the narratives and counter narratives, unlocks this parallel in scale between the very intimate and the very political and global.” The border—physical and spiritual, a manifestation of otherness that is printed on signs and daubed in memories—has become a repeated motif of his work: “I’ve been interrogated; all kinds of things have happened to me at borders, and I’ve made work around that,” he states plainly.

The split screen of his new film The Destructors, currently showing at Spike Island, opens with two images. On one side, staccato palms; hands rhythmically hitting knees; a soundtrack to the image that builds and swells. On the other, a pair of dangling, anonymous feet, clad in white cotton socks, that rub together anxiously, toe over toe. This focus on hands and feet—a manifestation of the anxieties of the body— continues throughout.

The subjects are shot from behind or in profile, or else the top halves of their faces are out of shot entirely. The men are crouched in empty rooms, sitting on the thin plastic chairs you get in church halls. Interrupting these are a series of eerie, dreamlike images: black smoke flowing through a ventilation unit. It billows like storm clouds, silk, blood in water. A flood in the hallway.

It’s at once everyday and surreal, bound together by a script that is by turns poetic and blunt. “The whole time, I am pleading with myself to take my own hands from around my own throat,” a man says about the experience of being “forgiven” for terror attacks he played no part in.

Perretta credits music videos for the construction of this layered, idiosyncratic visual identity, one that places a particular emphasis on sound design: “Not coming from a gallery-going family, the experimental videos that I was exposed to were music videos, particularly Hype Williams videos and anything from very high-budget, American, R&B and hip-hop videos to really low-budget grime videos that would be on Channel U. And I always wanted to try and copy those.”

“Not coming from a gallery-going family, the experimental videos that I was exposed to were music videos”

“Films are one of the few mediums that can encapsulate music as well as text, in a kind of holistic visual language. It’s a container that can hold all of the things that I’m personally interested in.” He summarises his technique as “mucking around with stuff. And then sometimes you go, oh shit, that works, and you just keep going,” adding that “the thing I’m best at is just getting obsessed with something, really getting into it. YouTube tutorials are my relaxation; it’s really weird.”

Taking its name from Graham Greene’s 1954 short story about disaffected youth in the wake of the London Blitz—“I studied it for GCSE English, around the age of thirteen”— Perretta tells me, The Destructors focuses on the experiences of young men affected by Islamophobia, surveillance and societal paranoia in the wake of 9/11. It was the same year, as he studied Greene’s text at school, that the Twin Towers came down. “There started to be this kind of scrutiny of bodies like mine, brown male bodies, particularly with Muslim names.”

Perretta centres the experience of belonging in a body that, simply by existing, has been involuntarily politicized, and transformed into a site of state-sanctioned violence and brutality. The body is no longer allowed to be private, personal, but has been claimed on behalf of a society that wishes to scrutinise every part. Think of strip searches at airports, or of the photos of tortured Abu Ghraib prisoners.

I ask him how the film interacts with Greene’s text, a relationship that he calls “eerie”. He points to the fact that, as a result of the distrustful way in which “young brown boys were being looked at in the advent of the war on terror,” he was “living the reality of being perceived as this misled youth, while reading this book about misled youth.” As he reflects, “And that’s the kind of thing that sticks with you.”

Our conversation turns to the Jarman Awards; Perretta is on this year’s shortlist. I ask how he feels about the hyper-competitive awards circuit, one of the only ways for young artists to make money in the current economic landscape. He’s firm in his answer: “I don’t see anything redeemable in individual awards. I don’t believe in the cult of personality. It’s counterintuitive for me to say that as an artist that operates under my own name but, you know, that might not necessarily be my life forever. I’m grateful to be nominated, and I’ve accepted nominations because I’m broke.”

“I don’t see anything redeemable in individual awards. I don’t believe in the cult of personality”

He pauses, laughing. ‘I’m really pleased to be mentioned in the same breath as Rehana [Zaman] and Hetain [Patel] and Cécile [B. Evans], and everyone else that has been nominated. This is also no disrespect to Flamin or to the Jarman Awards; anything in his memory, I hold very close to my heart, because I think Derek Jarman was a visionary. And to be mentioned in parallel with him is a great honour. But I don’t believe in individual awards. It cements this neoliberal agenda of relentless competition.”

Spend time with Perretta, and yearning for a different kind of art world emerges: a vision for one that thrives on community rather than competition; where art is publicly subsidised rather than bought with dirty money, unshackled from elite institutions and put into the hands of the people. “I’m channelling Audre Lorde,” he says, smiling. “I’m aiming upwards.”

At Spike Island until 8 December 2019 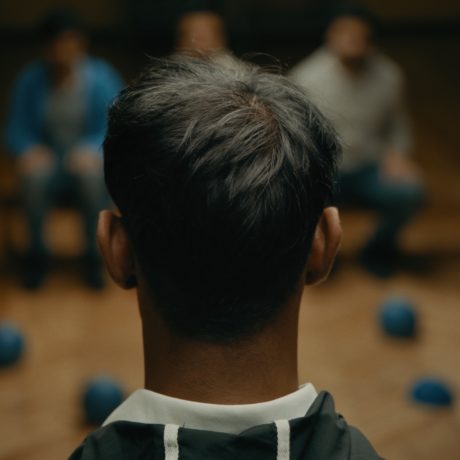