If you were called upon to imagine a reindeer’s stomach, “delicate” might not be the first word that leapt to mind. In artist Máret Ánne Sara’s work Gutted – Gávogálši (2022), though, it is a soft and vulnerable thing. Dried to a husk-like shell, dark, with a gently-furred texture, it hangs like a shadow on almost invisible strings at this year’s Venice Biennale. The work evokes the artist’s kinship with the reindeers that her family, part of the indigenous Sámi community in the north of Norway, have cared for over generations, all while fighting the government’s demands that they slaughter their herds.

In a first for the inhabitants of Sápmi (an area that spans the northern parts of Norway, Sweden and Finland), the Nordic pavilion at the 2022 Biennale plays host to “The Sámi Pavilion”. In this exhibition, which also features Pauliina Feodoroff’s affecting performances and Anders Sunna’s muralistic paintings documenting the Sámi struggle in Sweden, the works critique the governments of all three countries, while also “representing” those countries by showing in their joint national pavilion. 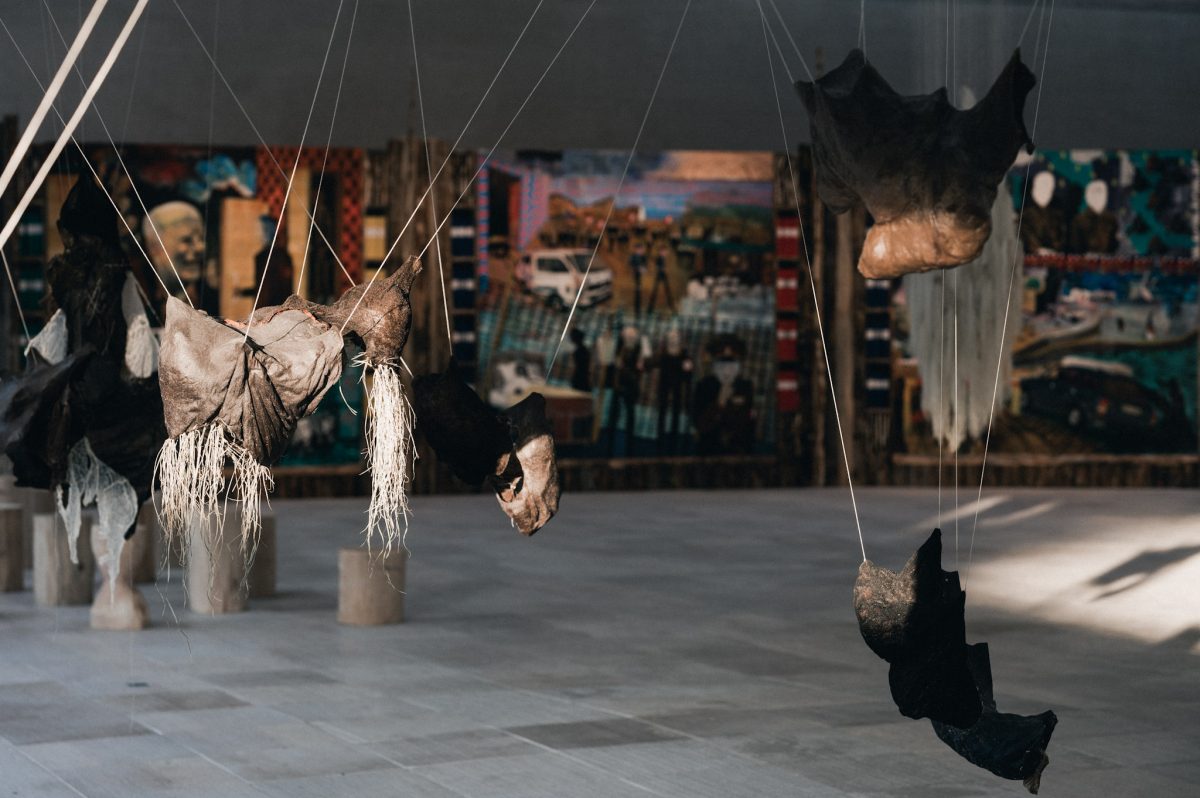 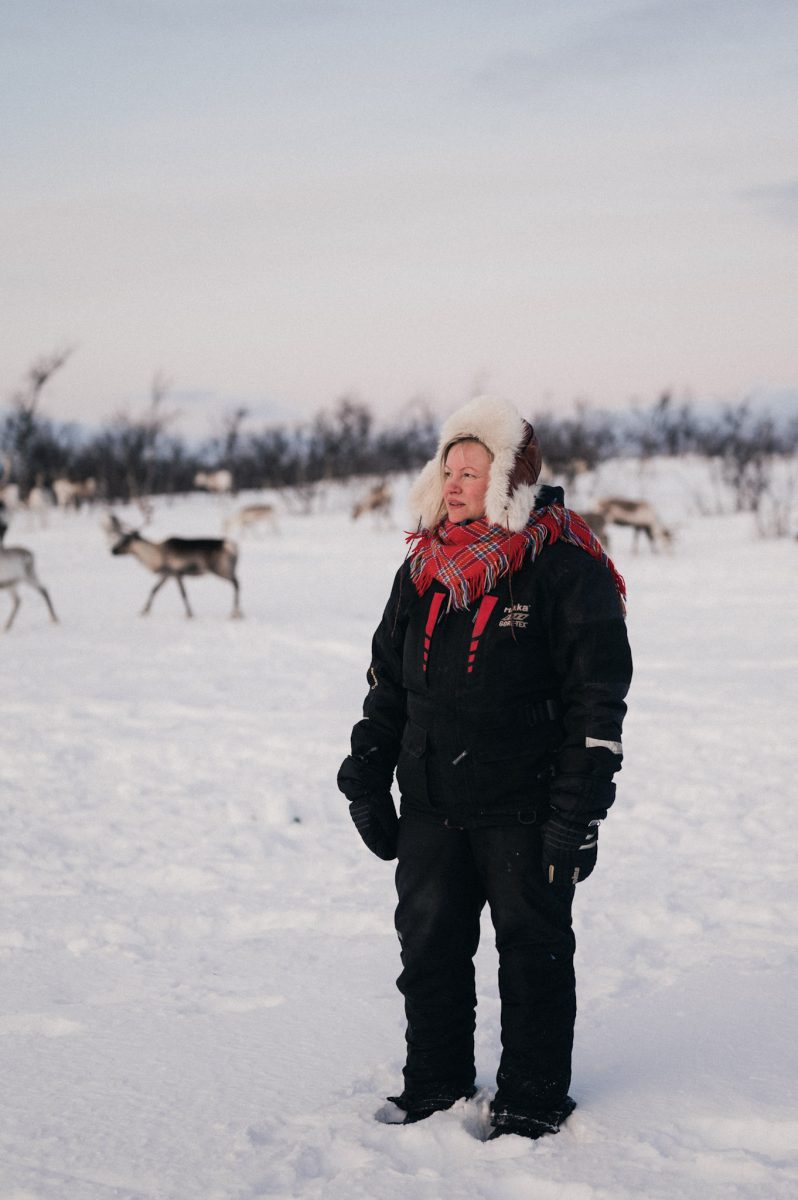 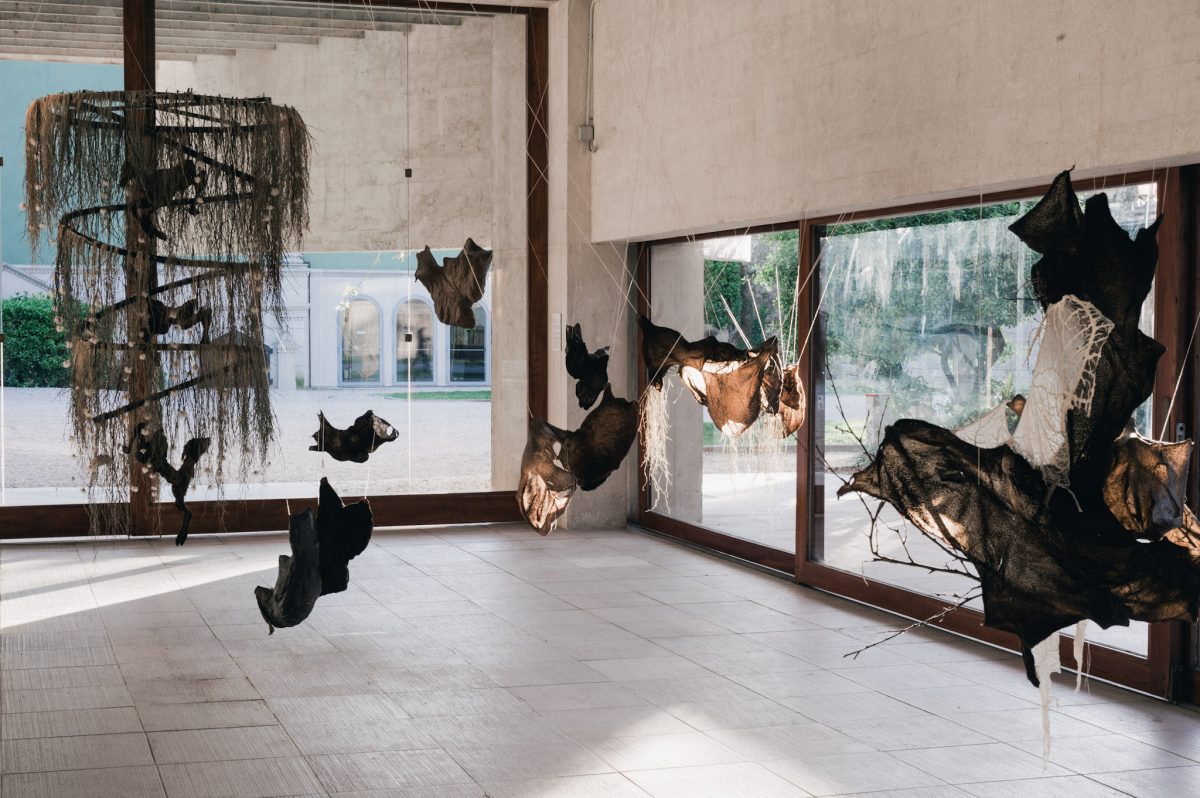 A striking number of the national pavilions at Venice this year are filled with indigenous perspectives, perhaps taking their cue from the main exhibition, where expansive and under-represented worldviews take centre stage. “There has been a growing international recognition of indigenous art and artists that has been going on for a long time,” says Candice Hopkins, a curator of Tlingit descent who worked on the 2019 Canadian pavilion in Venice.

Yet these artistic positions have a different meaning in the national pavilions of Venice, under the aegis of countries that have historically often colonised, murdered and oppressed the people whose art now represents them. “It’s not just how we may or may not want to represent our nations, but also what’s bound up in the very formation of the Biennale itself,” reflects Hopkins. “Venice is founded on the ‘world’s fair’ model, and there is a dark history that’s associated with that, particularly with regards to native people being on display.”

At the Mexican pavilion, a group exhibition explores a pre-colonial cultural understanding of science and the future. Mariana Castillo Deball’s work Calendar Fall Away (2022) marks the floor of the pavilion with symbols evoking the epoch in which Mexico was colonised, combining pre-colonial and European ways of thinking to question the primacy of the Western time system.

Meanwhile, Santiago Borja has collaborated with weavers from El Camino de Los Altos to show the work Talel (2022), composed of 23 weavings. Each one incorporates personal objects from the women who made it, such as human hair and candles. The artist describes it as an interpretation of a DNA sequence.

“Venice is founded on the ‘world’s fair’ model, and there is a dark history that’s associated with that, particularly with regards to native people being on display”

In the Biennale pavilions, indigenous attitudes to nature represent an holistic, sustainable alternative to the extractive capitalism that colonialism wrought. They seem especially relevant in a time of global climate crisis.

As Máret Ánne Sara from the Sámi Pavilion puts it: “The strategies so far are not working…indigenous communities are the ones who have managed most successfully to protect a healthy environment.” The indigenous perspectives on display in this year’s pavilions, from Mexico to Sāmoa to Chile, may come from a range of varied cultures, but they are often aligned through their mutual struggles against the governments that seek to control their traditional knowledge, practices and lands.

In the Chilean pavilion, the multimedia installation Turba Tol Hol-Hol, directed by curator and researcher Camila Marambio, brings the viewer into a multisensory environment. A 12-minute film is projected onto a bio-plastic, panoramic screen, with sounds, smells and even a lab-engineered sphagnum moss evoking the peat bogs of the Tierra del Fuego. These peatlands were the home to the Selk’nam people for thousands of years, a group that was the target of a 1930s genocide by European settlers. The bogs also store an incredible amount of carbon, apparently equivalent to around three times that held by the Amazon rainforest.

“Indigenous attitudes to nature represent an holistic, sustainable alternative to the extractive capitalism that colonialism wrought”

“The peat bogs are here because they have been cared for over the course of 10,000 years,” say Alfredo Thiermann and Dominga Sotomayor, the architect and filmmaker of the project respectively. They explain that they initially had reservations about working on the pavilion, since they aren’t themselves a part of this indigenous community. It is the direct involvement of their Selk’nam collaborator, writer and artisan He’many Molina, whose recorded voice reverberates throughout the space, that gives the pavilion its meaningful perspective.

The pair’s reservations are unsurprising. There is a long history of exoticisation and appropriation of indigenous cultures in Western art, with such critiques levelled just two Biennales ago at Ernesto Neto’s Um Sagrado Lugar (A Sacred Place) (2017), which transported an indigenous Huni Kuin sacred structure into the Venice Arsenale. But, for the indigenous artists at this year’s Biennale, things feel different.

For Sāmoan artist Yuki Kihara, whose work is also critical of the history of colonialism, the opportunity to represent Aotearoa New Zealand came as a welcome surprise: “I outlined everything with [curator] Natalie King, so I was surprised they chose me,” she says. “But I’m happy I’m giving all that money to the Fa’afafine,” she explains, referring to the indigenous ‘third gender’ group that she belongs to, designating those who are assigned male at birth and express their gender as female.

For her exhibition Paradise Camp, Kihara hired Fa’afafine to work both in front of and behind the camera for a mock video talk show, critiquing Paul Gauguin’s portraits and their exoticisation of indigenous people in the South Pacific. Behind the film a wallpaper of a lush beach shimmers, studded with 12 intimate, sometimes cheeky portraits of Fa’afafine in traditional attire, which recast the injuries of exoticisation with humour. 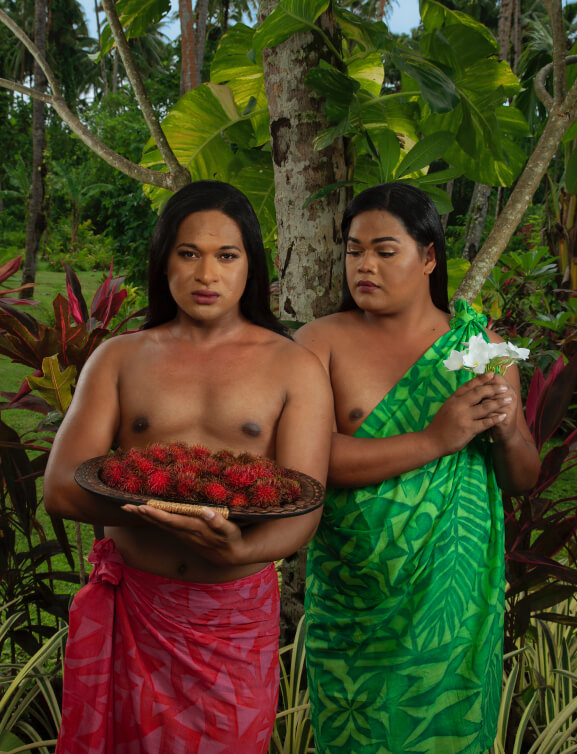 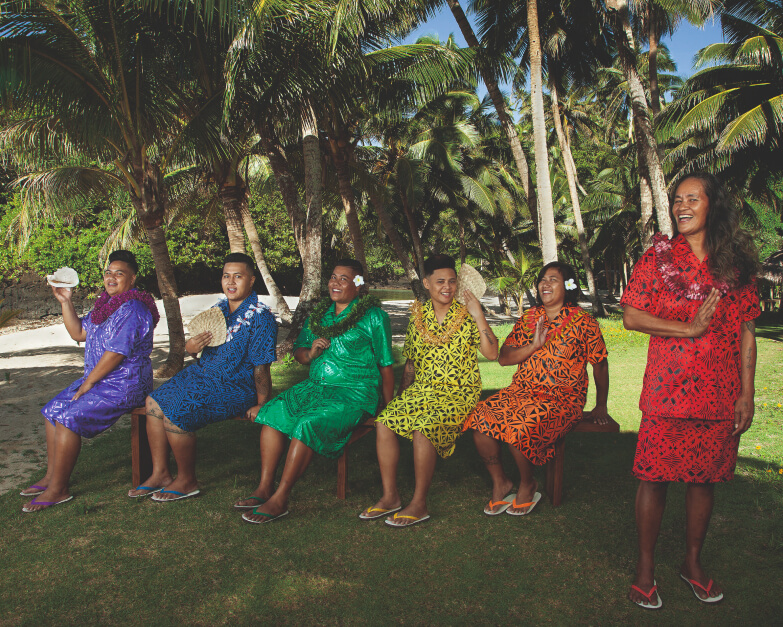 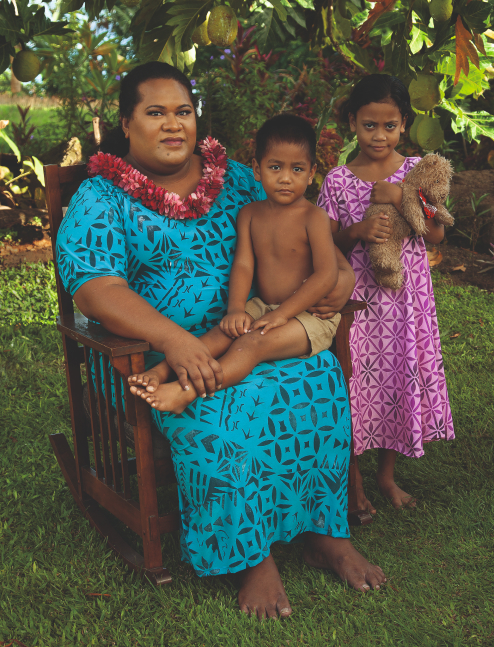 Kihara is a dual citizen of Aotearoa New Zealand and Sāmoa, where “impersonating a female” was illegal until 2013, and homosexuality remains, technically, a crime, though in practice not enforced. The law is a product of the colonial New Zealand government which enacted these laws on the eve of Sāmoan independence in 1962. Like other indigenous artists in this year’s Biennale, she wanted her work to draw attention to the environmental crisis: in Sāmoa, 80% of the population is directly dependent on the land and ocean for sustenance, and all residents live within one kilometre of the ocean.

“Many indigenous communities have reached out to me. Regardless of where we’re from, we will always show solidarity to each other”

But for Kihara and her community, an indigenous perspective also connotes a more expansive understanding of gender: “What I wanted to do with Paradise Camp was to imagine a Fa’afafine utopia, where colonial heteronormativity is shattered to make way for an indigenous worldview that is inclusive, and sensitive to the changes in the environment,” she explains.

Kihara also took the opportunity to set up solidarity with other countries with boundary-breaking representation in this year’s Biennale pavilions. Entitled “Firsts Solidarity Network”, this informal peer-to-peer group encouraged support calls and connections between artists such as Sonia Boyce, the first Black woman to represent the United Kingdom, and Małgorzata Mirga-Tas, the first Roma artist to represent a nation at the Biennale, exhibiting at the Polish pavilion.

“Many indigenous communities have reached out to me, they even came to visit my pavilion,” Kihara says. “Regardless of where we’re from, we will always show solidarity to each other. We are all in a similar struggle.”

Meanwhile, directly after the Biennale’s preview days, the indigenous-led art gathering Aabaakwad took place at the Sámi Pavilion, where indigenous artists and curators discussed many of the themes that this year’s pavilions raise. For Hopkins, this event was a small glimpse of what a hopeful future for indigenous artists could look like.

“There was something really special this year, in just being able to gather in a place where we have not really been represented,” she says.

“The fact that there were so many of us? Perhaps, that means the doors won’t close again.”

Josie Thaddeus-Johns writes about art and culture with a tech slant. She lives in Cambridge, Massachusetts