“We are living in a post-traumatic age”, explains Margaret Haines. She predominantly makes films, turning the uneasiness of modern-day existence and the sense of dystopia it brings into rich, visual experiences. Her protagonists inhabit empty urban spaces, lit by neon hues and endless sunsets. They are skaters, bikers, friends and astrologists, all seemingly dropped into the scene to relay a message. Occasionally they read directly from a script, referencing Jean Genet or borrowing from Greek mythology. But mostly they speak in monologues, repeating conversations or talking candidly in a stream of consciousness.

Everybody seems to be soul-searching to some extent. Exploring mysticism, astrology and the ritualistic side to wellness culture, she illustrates a society obsessed with escapism. Teenagers are often involved, perhaps because it is an age characteristic of uncertainty. Day and night lose their divide as it seems to always be dusk, suspending the films somewhere in between. Symbols from different time periods are mixed together, seeping into the present; a shopfront reads “Apollo Insurance”; the signs of the zodiac morph into the CNN logo. By disregarding a linear timeline and refusing an easy plot, she disorients the viewer and places them into her surreal yet slower-paced world.

What led you to draw a comparison between astrology and the news in The Stars Down to Earth?

The film was written and shot during the first weeks of January 2015, before the term “fake news” became pervasive or was used by the current US Administration as a propaganda tool, or a deflection and refraction tool. But somehow The Stars Down to Earth tapped into this space, perhaps because I was more interested in the real world which fed that fictional world into existence.

I was reading more about Wikileaks and Black Lives Matter, which, at that point in time, although covered by mainstream media, fell outside its understanding as revolutionary movements. I was interested to negotiate the arbitrariness of the news, and the superstition of terror as a tool for manipulation with something often derided as invented, like astrology, in a kind of simplified satire of mainstream news media.

But, beyond this, I was interested in considering astrology as an older news system which could be taken as infallible to the manipulation of corporate media. For instance, when you see Venus on the horizon at dusk or a full moon, or Mars conjunct Venus in the sky, these are real events and their poetic derivatives or readings can be decided or checked by the individual star gazer. I was also interested in the simultaneous existence of two systems of information, and their seeming anachronism or invalidity to one another.

Your characters often wear logos with historical roots, such as the Thrasher pentagram or the Independent Truck Company iron cross. What about this interests you, if it is a deliberate choice?

The costuming is always deliberate, even if some things come together at the last minute. The film I Dreamt in Heaven came from seeing Shake Junt, Independent Truck Co. and other brands I associated with California or a particular American corporate rebellion, but in Europe. I wanted to unpack the genealogy surrounding that kind of skate or youth branding, like empathy, rebellion, and faux empathy, and how at the time this was being consumed and inflated by the alt right in the US, in 2017. This branded anti-establishment rebellion which was fully conservative – I was interested in that space and its mobility as an idea.

I also wanted to see how far these symbols could go. How, when taken out of their intended branding, they become suddenly recognizable as something else. When Anna Maria wears the pentagram from Thrasher, I wanted the feeling to be like, “Who’s the pirate?” I wanted that confusion. Like, is she wearing it like a witch would, you know, emerging from the flames? Or like an alien that recognizes the import of the sacred geometry of the pentagram for invocation or banishing, while not caring or knowing that it belongs to Thrasher; not knowing what that is, but in that possible ignorance, also fully knowing beyond its current context. Like this divine intervention or subversion into the corporate world which might not even be necessary. 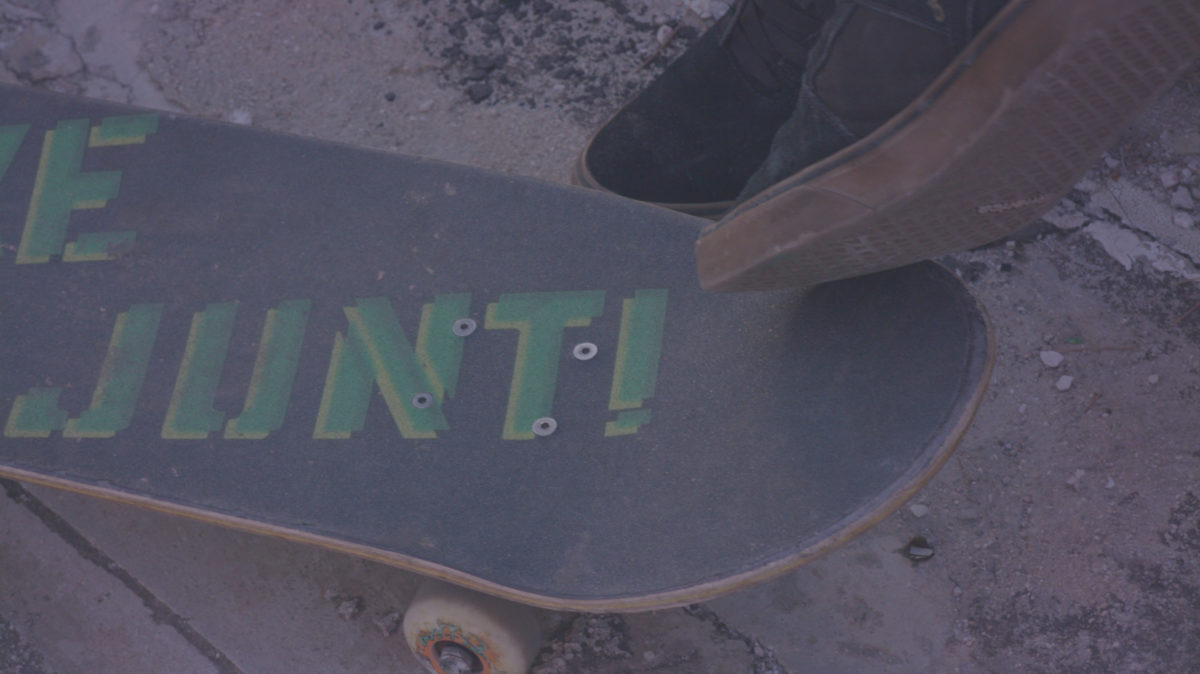 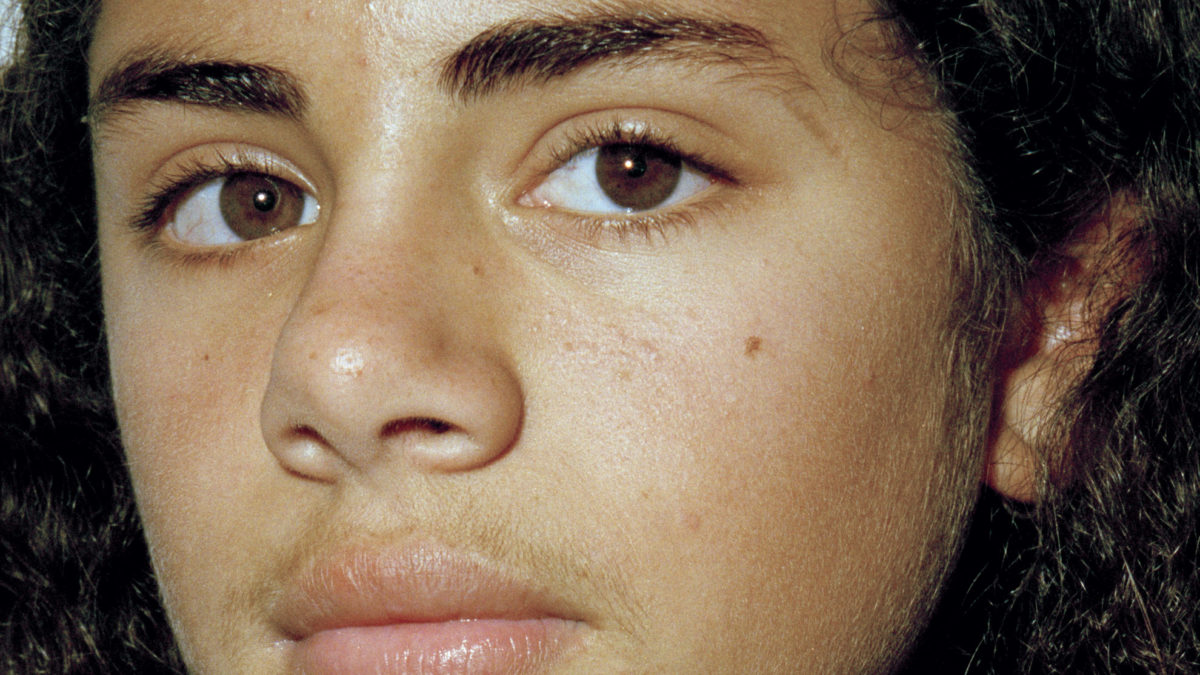 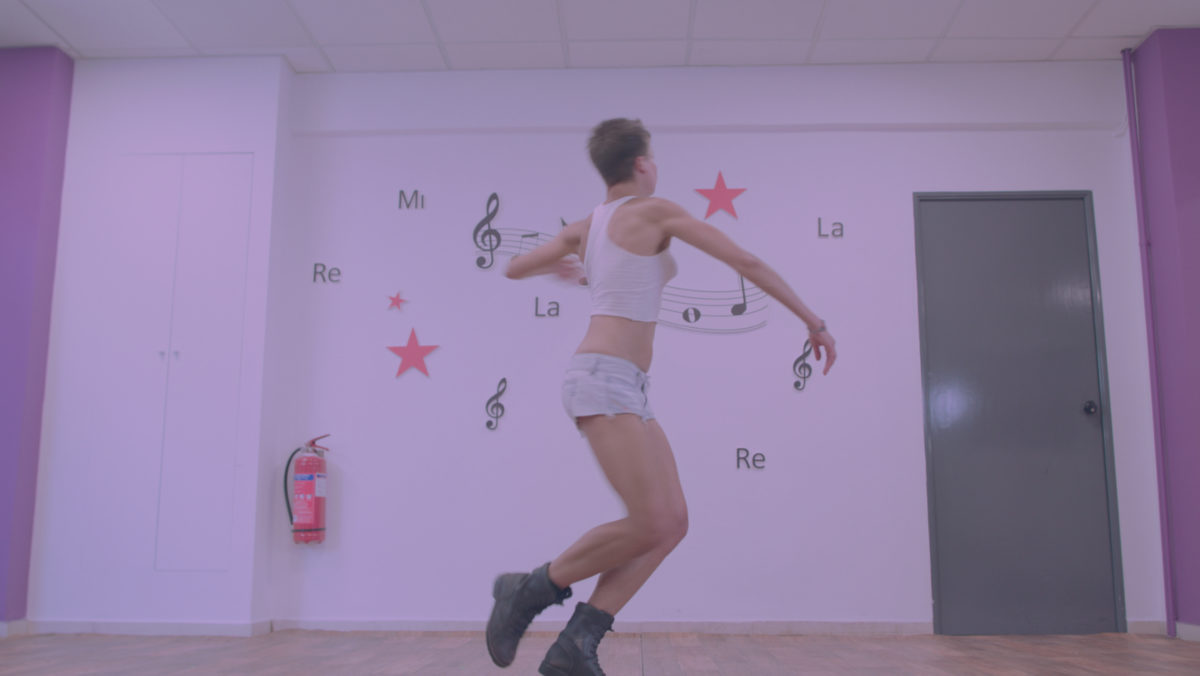 What is it about temporary imagery like stickers, artificial nails and emojis that appeals to you?

I’m into their parallelism with language as a universal language, an iconography in a post-literate society or, with the stickers or emojis, the possibility of a new alphabet or a mini-movie, and how emojis have been theorized in the last couple of years within the network age.

But, mostly, somehow I think the emoji/sticker/temporality use comes from a desire to reference cinema yet wanting an imagery that belongs to the contemporary or the non-cinematic. The animation was a way to kidnap the image from this space of film that is beautiful because it is timeless, but also harmful because it is timeless. I don’t want the work to ever feel like a rehash of the cinematic project of auteur cinema from the 1970s, or not entirely. It sounds stupid, but adding this temporal iconography—stickers, emojis, nails, or a specific colour palette—cuts the work from being digested into that project.

I think the actual language or dialogue in the film functions in the same way. I think it goes back to this desire for those works to destabilize the comfort of the cinematic contract. They aren’t cinema, but because of the quality of the image, perform as such sometimes. So the text, dialogue, music, costuming and other temporal effects are meant to subtly move away from the expected routine. I’m not against cinema or working in that way, it’s just not what these works individually were about.

How important are the characters to you, or do they just serve as a vehicle for text?

It depends on the project. I would say that in COCO and The Stars Down To Earth, the character speaks, and in the other two films, I Dreamt in Heaven and U Face God and the Camera at the Same Time, the characters speak with the text, in that both are equally present but the text sometimes takes precedence.

In U Face God and the Camera at the Same Time and I Dreamt in Heaven, the characters are more or less actors enacting or embodying the text. I also work with my friends or people I know a lot, so although there may be a lack of character in favour of text, there is still a portrait of someone I know enacted, like when Sands Murray Wassink reads, he is reading a hybrid of a text I wrote, his own writing and an unearthing of Kate Millett. Or when Jack teaches astrology, he’s my astrology teacher, so there is an enactment of documentary portraiture sometimes occurring as much as textual embodiment.

“I wanted to unpack the genealogy surrounding that kind of skate or youth branding, like empathy and rebellion” 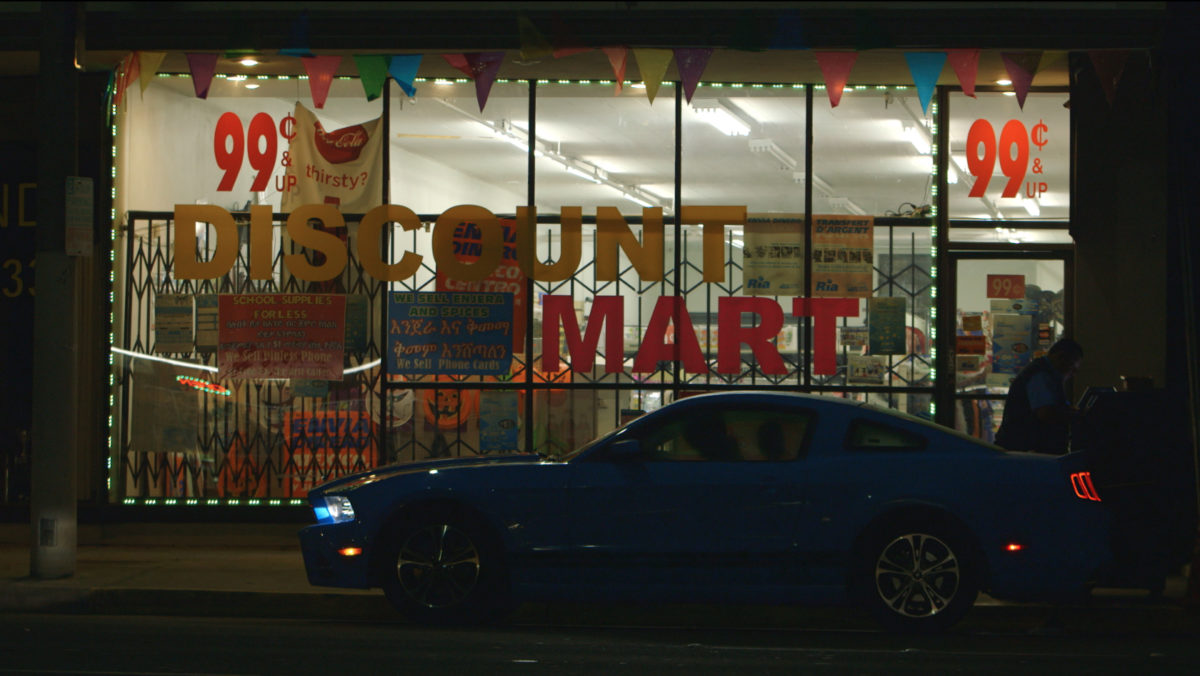 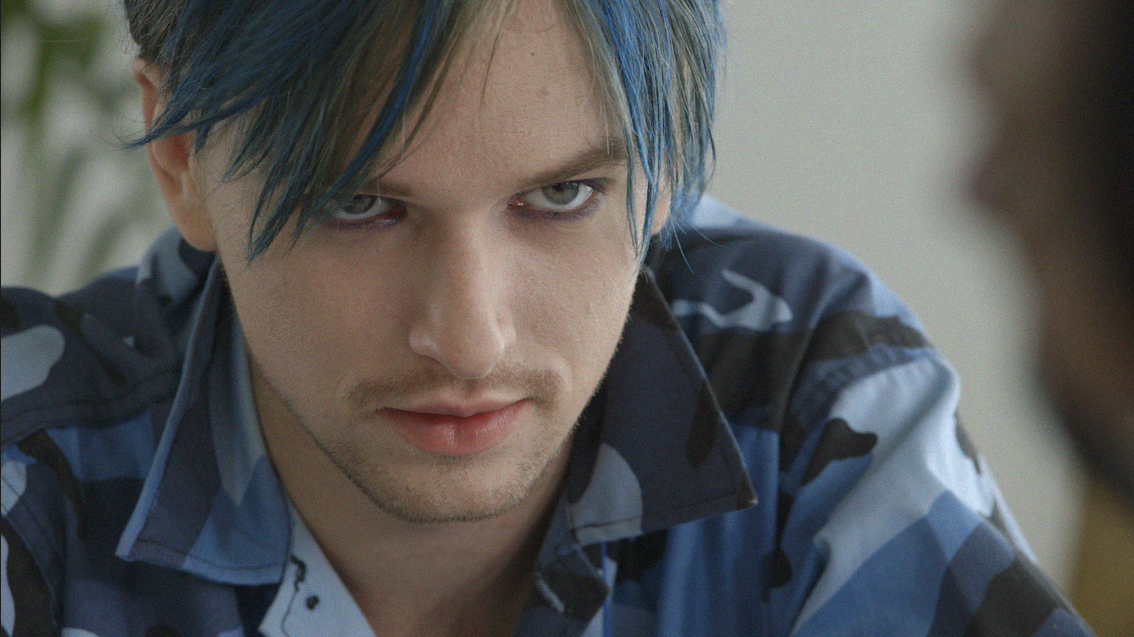 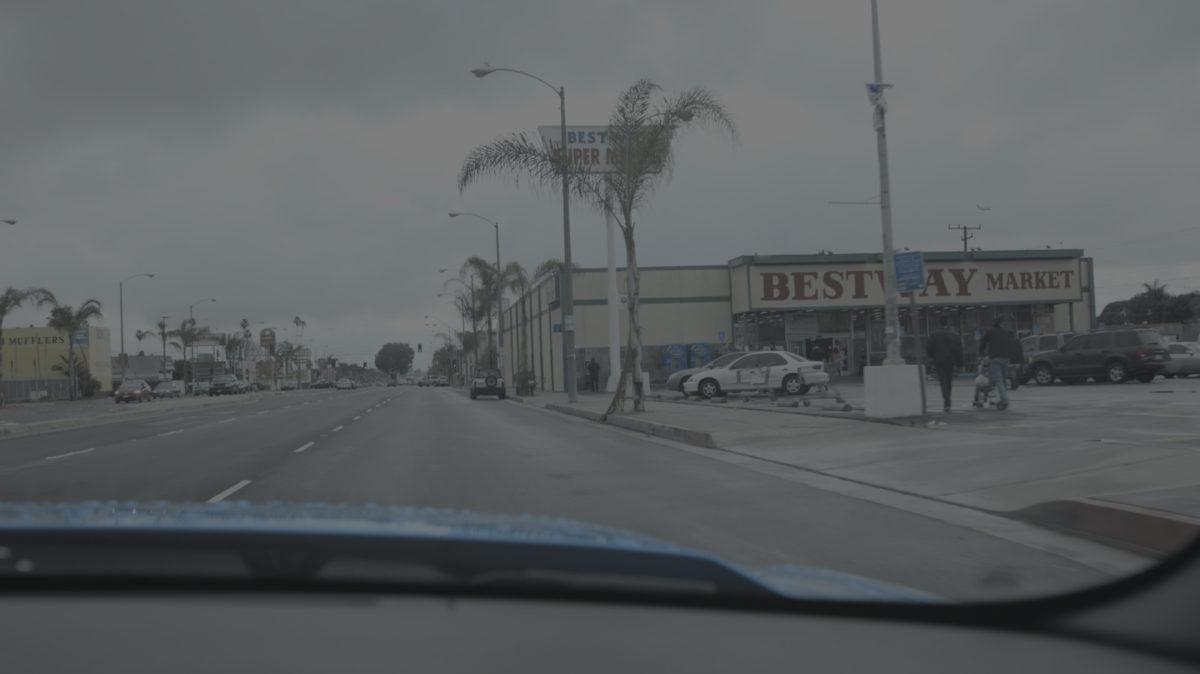 Your characters seem to live outside of “normal life”—we don’t see anybody with jobs, or moving about with a real purpose. Is this to give them more room for exploring big ideas like time, myth and science?

The logic in which they function is outside of the everyday. While they may, in some instances, be looking for money, trying to get a job, or holding up a convenience store, I am interested in the performance within the expected performance of normal life as a betrayal or rebellion against it. So within U Face God and the Camera at the Same Time, which is a brothel or porn shoot, on-camera time is instead used to read these manifestos. It’s following Michel de Certeau’s idea, “la perruque”—to work on company time, to perform self-expression despite the normalized society of the spectacle or of the consumer. Like work your own work while on the job.

Even with the ones that don’t have jobs, like Cassandra in The Stars Down To Earth, they are operating their own ideas while performing an expected decorum—you know, big car, nice outfit. So, yes in a way, it is a tactic to give them more freedom; to escape this idea that only successful people can explore big ideas and escape the normalization of life. 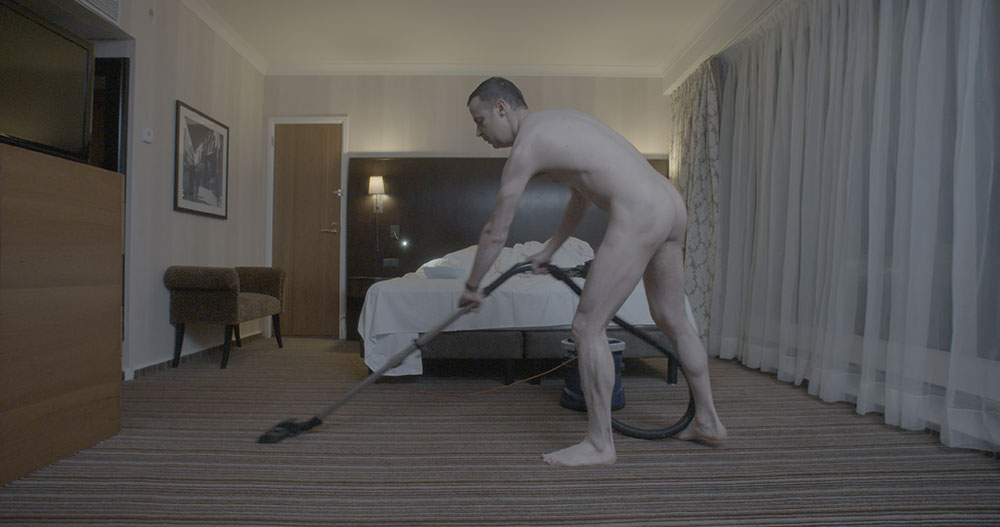 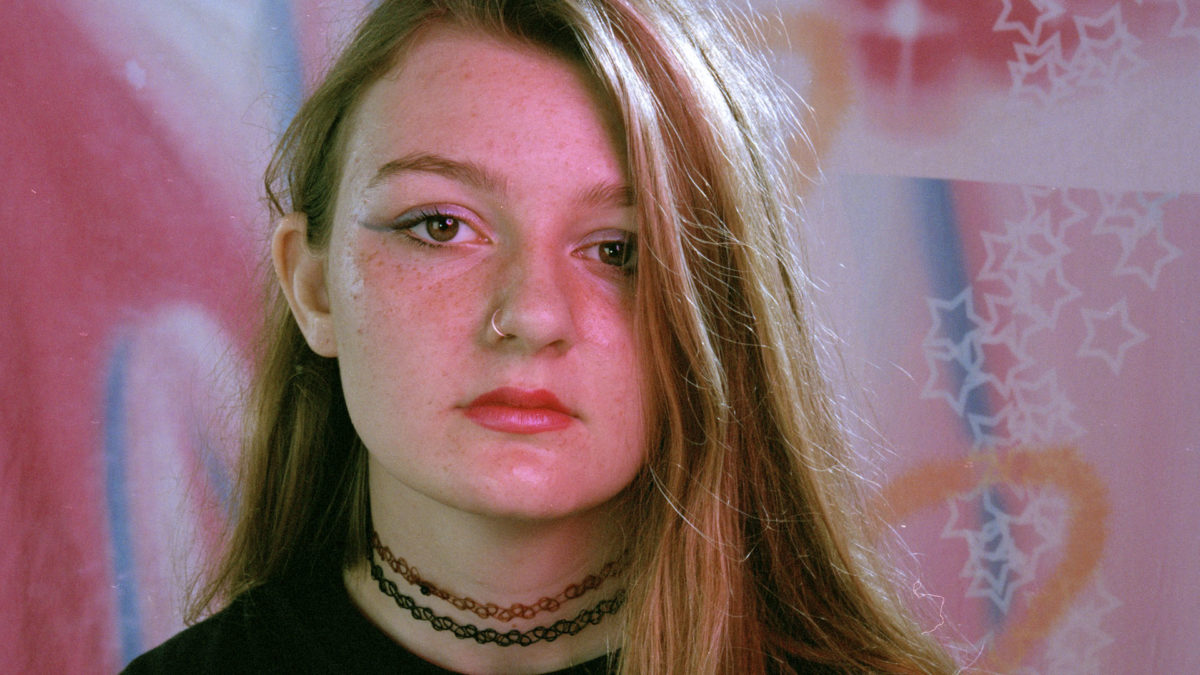 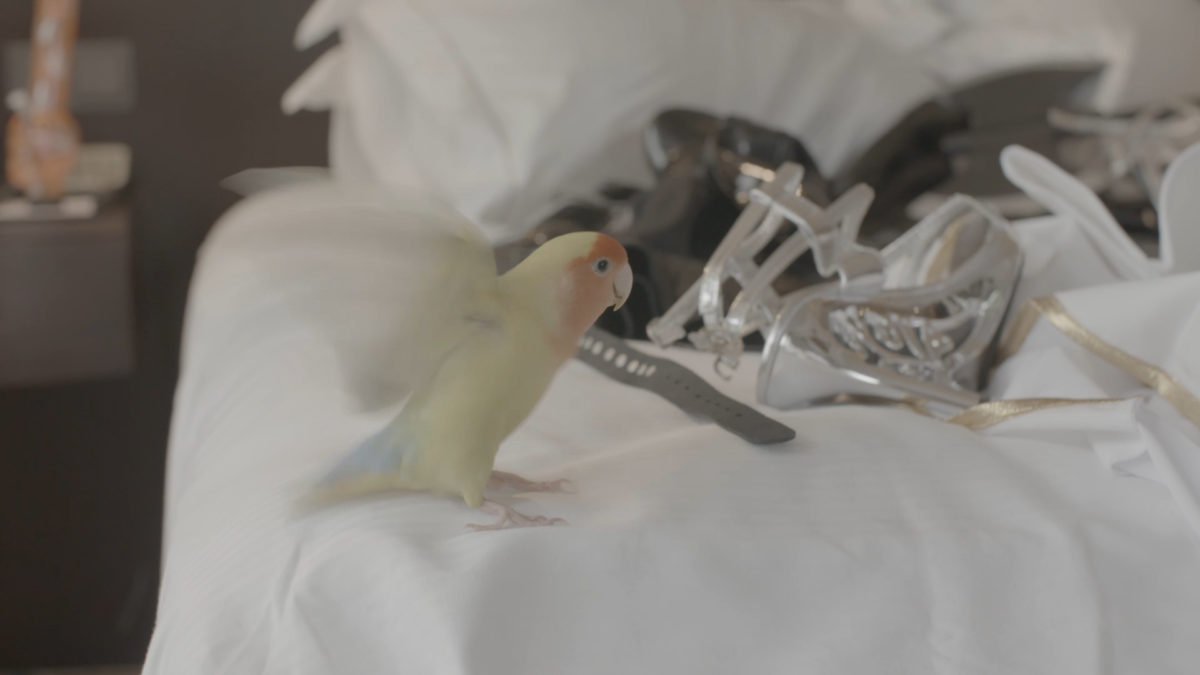