Seven years ago in his studio in Belgium, Michaël Borremans told me about the response to his painting Red Hand, Green Hand at an opening in Budapest. The image was widely interpreted as a symbol of Hungary’s political circumstance and even showed up on a large banner promoting the show. Borremans asked the curator why this specific work held such local significance. “[It] explains the situation in the country we live in,” he was told. “It shows two contrasting hands, but they come from the same body. That’s our problem.” The answer satisfied Borremans. That the painting had had an unintended and instinctive meaning signalled that “I had made a good work”, Borremans said.

This year at the opening of his solo exhibition, Fire from the Sun, the inaugural show at David Zwirner’s new gallery in Hong Kong, Borremans was likewise satisfied. This time, because people were less likely to voice the meaning they read into his paintings. The significance was in this reticence. The perceived meaning of the works is difficult to voice or uncomfortable to admit.

In the most evident terms, Fire From The Sun portrays children aged two or three in various stages of play with fire and what appear to be human limbs, even hair. The children are all light-skinned Sistine-style cherubs, sometimes covered in blood. The children do not appear to be distressed or disturbed (though some viewers at the gallery may be). The drama of the paintings is heightened by their visual connection to each other—and, more broadly, to older works by Borremans. The scene in each painting is composed against a similar beige backdrop. This is a set or a stage, devoid of context, withholding of answers, but suggestive of a director or someone watching.

In some of the paintings the children are in the process of disappearing: phantom bodies not quite removed from their gruesome acts. These ghostly figments remind us of the artist’s hand (another detached extremity) and its control over what we see and what we don’t. More poetically, the visible existence of “disappearance” suggests the impossibility of a clean escape from a bloody episode. Importantly, Borremans chose to depict children too young to have clear memories. In some fictional future, they might be unreliable carriers of this formative origin story or trauma. Are these portraits of what it means to try and erase the past, unsuccessfully? Like Red Hand, Green Hand, this exhibition is an unexpected, sometimes unwelcome, illumination of the different situations in which we similarly live.

“In some fictional future, they might be unreliable carriers of this formative origin story or trauma.”

As unsettling punctuation marks Borremans also included two large paintings of industrial apparatuses. These images are not outliers: they are set against that same backdrop and clearly part of the fragments that we are meant to piece together. They set Fire from the Sun in our contemporary, industrialized world. This exhibition does not offer the comforts of distance. But to relieve some tension, a misanthropic or desperate laugh is more than appropriate. Good social satire is, at once, frightening and hysterical.

While the fire and (probable) cannibalism imply some sort of ritual, the works are most chilling as sketches of random violence, causal and instinctual. The depicted characters break with one typecast (angelic) while fitting another (demonic). Fire from the Sun sits cozily—bloodily, cleverly—on the art history couch next to Goya and Francis Bacon, but the exhibition is not an exercise in appropriation or a closed circuit of art talking to art. Like Red Hand, Green Hand, this exhibition has an intuitive relevance to the time in which it was created and the circumstances in which it first exhibited.

“Fire from the Sun sits cozily—bloodily, cleverly—on the art history couch next to Goya and Francis Bacon.”

The opening of the Hong Kong space marks the twenty-fifth anniversary of David Zwirner gallery as it increases its international presence beyond New York and London. Fittingly, the crowd that showed up for the occasion was international. David Zwirner counted visitors from twenty-two countries and four continents among his guests. The general opening was likewise packed—crammed, stuffed—no doubt with people from different starting points. Hong Kong is an international city, a port city, a crux of world politics, world history and world finances. This exhibition was preordained to fall in the vision-line of multiple points of view.

The paintings live in the seductive space of metaphor and possibility, which can stretch beyond the artist’s intentions. Borremans created this body of work specifically for the opening; he knew that a local reading of it would have global variations. Having travelled from Los Angeles to attend the opening, I juxtaposed these paintings against the morning’s news: against cavalier acts of violence and bloody origins, against history’s unwillingness to be erased, no matter the pressure to do so. I heard other interpretations while there, and so did the artist: that the paintings examine the loss of innocence, that they are a caricature of original sin, that they meditate on hypocrisy, that they demonstrate human capacity to be at once good and evil. How many more ideas went unarticulated?

About a year ago I met Borremans at his studio while he was working on Fire from the Sun. From the outset the artist understood he was taking a risk with the new works, precisely because of their open relationship with interpretation. But even if the paintings deceptively represent a vacuum (lack of context, setting, explanation), they are not made in one. They are informed by a shared reality. Fire from the Sun explains our current situation, by daring us to say what we don’t want to. Just as the title suggests: that which illuminates our existence can likewise set it ablaze.

Fire from the Sun 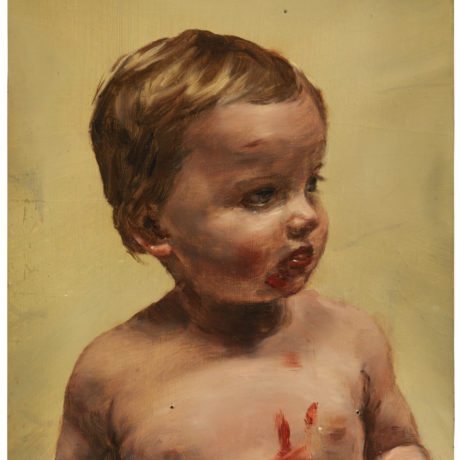