Orlando is a meaty coming together of radical intellectualism, avant-garde art and experimental writing. Informed by queer and feminist theories (the zine is named after the eponymous protagonist in Virgina Woolf’s 1928 novel, who transitions to become a woman) issue number three (actually the publication’s fourth issue) attempts to go “Beyond the Body”, and the way it has been portrayed in art and literary history and prescribed by identity politics.

“I wanted to put together an issue that considered what it both physically and psychically feels like to be a body in this current political moment, and something which could also offer a sense of release and escape: a salve, of sorts,” founder and publisher Philomena Epps tells Elephant. “I started writing a series of open questions: How do we transform ourselves, lose ourselves, or how are we kept back, limited or marginalized, both because of and in spite of our bodies? When does the body become the body politic? How can our bodies mirror or seek to rupture our current moment? How do we endure; how do we escape?” Through essays and interviews, Epps and a team of contributors delve into these questions, “exploring the divergent and manifold modes we might employ in order to come outside of ourselves, to become not bodies, but something else”.

Orlando contains the blood, sweat and tears of young London-based art critic Epps. She set Orlando up in 2014 as a way to publish emerging critical voices and artists and to bring those new perspectives together with the old guard. Staying independent from the start, “the best thing is the complete creative and intellectual freedom. I don’t have to answer to any commercial or corporate stakeholders,” she says. It’s not always easy, though. “I run everything myself, which can sometimes be the hardest thing, in terms of general administration and raising funds.” When she’s not editing the magazine Epps, who was Jerwood Visual Arts Writer in Residence in 2016, is writing and researching contemporary art.

Why You Should Read It

Orlando boasts a long list of top-notch new critics and writers (Octavia Bright, Tausif Noor, Ari Potter) who rub up against established names: issue three includes work by Marlene Dumas, Bunny Rogers, Vittorio Scarpati, Jo Spence and John Stezaker, among others. It’s high-quality experimentation with just the right amount of edginess to eschew stuffiness, but with the urgency of a political zine. Intersectionality is at the forefront of the latest issue, with a “polyphonic discourse” around race, sexuality, gender, dis/ability and illness—a top priority for Epps who is keen to revolutionize self-publishing in the arts and nurture voices that have long been neglected. Its print edition only comes out once a year—you’d be foolish to miss it.

Orlando Issue 03: Beyond the Body 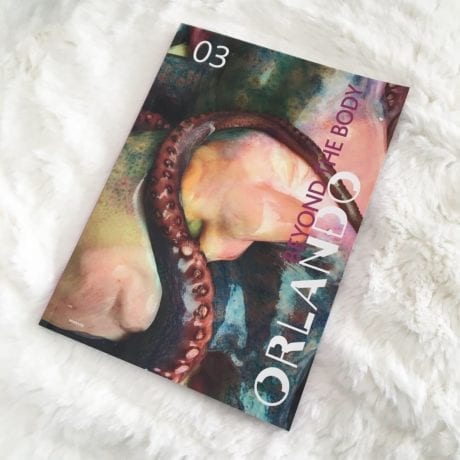