It might sound counterintuitive, but much of the best writing today isn’t being published in newspapers or magazines. Tired of the editorial constraints of traditional outlets and clickbait headlines, a growing number of writers are taking matters into their own hands. The result? An array of completely independent newsletters, containing everything from razor-sharp cultural criticism to handy round-ups of the latest museum news, delivered direct to the inboxes of subscribers.

Over the last year, these newsletters have moved into the mainstream, with high-profile writers striking lucrative deals with prominent publishing platforms such as Substack. Expect weird and wonderful musings on raves, Prince, pickles, Instagram, Buffy the Vampire Slayer and everything in-between. Subscribe directly to defeat the social-media algorithm, ensuring a curated feed that goes beyond the dreaded doomscroll.

Here are the best of the bunch, sure to keep you entertained and informed on all the latest cultural goings-on.

Dispatches from the Internet

Described as ‘a daily newsletter about entertainment online’, Dirt invites a wide range of contributors to pen texts on anything from a potato-shaped house in Idaho to The Sims computer game, alongside a regular round-up of ‘the week in streaming’. With a rich plurality of voices, it’s not quite your typical newsletter, yet not quite a magazine. Occasionally scrappy, peppered with screenshots scraped from the depths of the internet, and always engaging.

Sean Monahan (co-founder of K-HOLE, the trend-forcasting agency who coined the term normcore) is the writer behind 8Ball, a weekly newsletter on culture, trends and tech. These carefully constructed essays include an argument in defence of the power of words online (penned in active opposition to the image-led culture of Instagram), and the so-called democratisation of culture on the internet.

“Dirt is occasionally scrappy, peppered with screenshots scraped from the depths of the internet, and always engaging”

First started way back in 2013, this internet-obsessed missive was one of the pioneers of the newsletter form. Recently relaunched for the Substack era, the daily emails (sent out Monday to Thursday) link to everything from tech criticism to showbiz news, and capture the frenetic energy of having 30-plus tabs open in a browser at any one time. As founder Rusty Foster puts it, “Today in Tabs contains a lot of internet, compressed as tightly as I can get it.”

A useful collation of all the latest art and culture-related news, debates and scandals for museum visitors and museum professionals alike, with a slant towards the UK (and, more specifically, London). The mix of bite-size reported stories and longer interviews keeps this newsletter engaging, aiming to keep readers “informed and inspired”. Emails are sent out twice per month.

A longform round-up of modern culture, with a slant towards UK and US writers, offering a mix of critical thought published both online and offline. “This is about writing and the people who write, as well as music, film, cultural production across every field, and all sorts of fucked up feelings,” founder Paul Johnathan explains in one edition of the newsletter. Some of the best new releases from the publishing world are reviewed here, alongside a heady mix of pop culture commentary and gossip from the literary scene.

Original commissions from a variety of writers keep this newsletter nimble where others stumble, with essays that fall anywhere from the whimsical to the confrontational. There is a risk-taking edge to the commissioning here, and a sense of spontaneity that more mainstream publications often lack. It’s a difficult feat to pull off, but one that Lugubriations manages with ease, a credit to their “roving group of writers and artists with a shared sense of despair and inanity”.

Weekly emails by British writer and novelist Huw Lemmey cover everything from heckling politicians to the portrayal of homosexuality in British satirical magazine Private Eye, and focus broadly on sex, history, politics and place. Started by Lemmey after finding that his writing was often “too personal, or too gay, for the taste of magazine editors”, Utopian Drivel strays beyond the essay form to experiment in a range of fiction, memoir and audio recordings.

“There is a risk-taking edge to Lugubriations’ commissioning, and a sense of spontaneity that more mainstream publications often lack”

The author behind the viral ‘millennial burnout’ essay, Anne Helen Petersen now publishes Culture Study, a play on the academic field Cultural Studies. A former professor of the discipline, in which high and low culture are studied in direct relation to one another, Petersen uses essays, Q&As and link recommendations to expand the genre. As she points out: “‘Culture’ can expand to include pretty much anything. Politics can be culture, celebrity can be culture, tourism and feminism and consumerism and work practices—all culture.”

A monthly newsletter about “all things short and story-based”, the focus of Elizabeth Lovatt’s The Tiny Narrative can take anything from a book to a work of art to a video game. While short essays are the norm, she has also strayed into the realm of flash fiction on occasion. She has written on Picrew, the Japanese avatar building service (for all bored by the sight of our own faces on Zoom calls), Buffy the Vampire Slayer and ‘dressing gay’ (both in real life and in video games). Intriguing, thought-provoking and never repetitive.

A newsletter about staying in, Nightlife by art critic and writer Rahel Aima promises, “no parties whatsoever”. Started during the pandemic, each edition sees a guest contributor detail their ‘quarantine culture diary’, with a highly enjoyable mix of personal musings and valuable recommendations for books, exhibitions and whatever else they have consumed culturally that week. Aima also offers a condensed reading list from around the internet, a handy round-up of criticism, pop culture and the occasional recipe.

Brilliant name aside (think Barthes for the internet age), this weekly newsletter by writer Andrew Key offers a highly subjective look at the full gamut of cinema, with a penchant for independent moviemaking from the 1970s (one recent edition explored the career of actor Elliott Gould, a favourite of director Robert Altman). Artist films make a regular appearance too, from Ed Atkins to John Akomfrah.

“Think Barthes for the internet age with this weekly newsletter, which offers a highly subjective look at the full gamut of cinema”

Former head of fashion at Dazed & Confused, Emma Hope Allwood sends out twice-monthly dispatches on fashion, culture and the internet. Her musings are a range of trendspotting and recommendations, split into categories based upon what she is currently reading, looking, watching, streaming and buying. It’s part diary, part zeitgeist temperature check.

“Hard-to-describe feelings” are at the core of this weekly newsletter by Brooklyn-based Haley Nahman, a former features director at Man Repeller. Maybe Baby made its name through Nahman’s characteristically intimate cultural commentary and critique, with a range of advice columns, podcast episodes and essays. It’s perhaps best described as an unfiltered reflection of the particular subjectivities that can influence our judgements of art, life and personal relationships.

An occasional personal newsletter from the Glasgow-based bookshop with a focus on counterculture and queer history. Each edition goes deep on a book of choice, from Prince’s memoirs to Stephanie LaCava’s The Superrationals, with the review format used as a springboard to broader discussion on everything from inequality in the art world to radical protest movements.

Expect sharply honed observations on television, cinema and theatre productions from producer and critic Salome Wagaine, who started her newsletter back in 2016 as a place to experiment with writing away from the mainstream press. Sent out sporadically, her bitesize essays offer a refreshing take on contemporary culture.

While there exists a plethora of independent cinemas across continental Europe, there remain all too few venues in the UK and US for documentary filmmaking that goes beyond the mainstream. In this newly launched newsletter, writer Matt Turner turns his attention to reviews of under-distributed or overlooked non-fiction film and art, aiming to redress the balance in an industry that so often crowds out the smaller players.

Each edition of this weekly newsletter takes the form of a review, which writer Rosa Abbott uses to great effect to introduce critical reflections that expand beyond the latest item under scrutiny, proving that no work of art exists in a vacuum. A discussion of Saint Laurent’s latest Y2K-themed fashion collection becomes an essay on clubbing in the early aughts, while Olivia Laing’s latest book is refreshingly discussed in relation to her personal Instagram account, raising questions about how far critics ought to go when writing in the age of the internet.

It is rare for the art world to stray far beyond visual and audio modes of presentation, but artist Sean Roy Parker is part of a new wave of creatives exploring the creative possibilities of taste, touch and smell, focused through the lens of food and ecology. His weekly newsletter documents his interest in fermentation and environmentalism, often via residencies and agricultural collaborations, with fascinating results.

The London Review of Looks

A newsletter about style from former fashion writer Ana Kinsella, each edition presents a perfectly formed vignette from the city with surprisingly emotional depth. Whether walking across Hampstead Heath or visiting the Hayward Gallery, Kinsella has a keen eye for the sartorial details that can tell endless stories about their wearer, which she evocatively conjures in short texts that spark the imagination of anyone who has ever enjoyed people-watching.

Dive into detailed discussions on music and drug subcultures, framed through a progressive, political lens. A ‘gonzo newsletter’ by LA-based journalist and former VICE music editor Michelle Lhooq, it explores “counterculture in the age of platform capitalism, algorithmic oppression and drug legalization”. Expect texts on underground parties, trends in weed and MDMA, and the connection between collective euphoria and protest movements.

You’ve Got Mail: The Meteoric Rise of the Email Newsletter 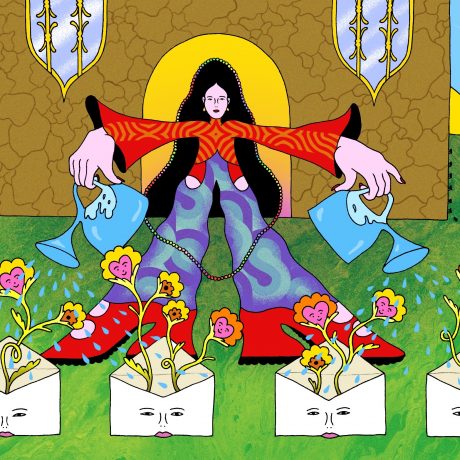